Dispatch from Tehran: The police are coming 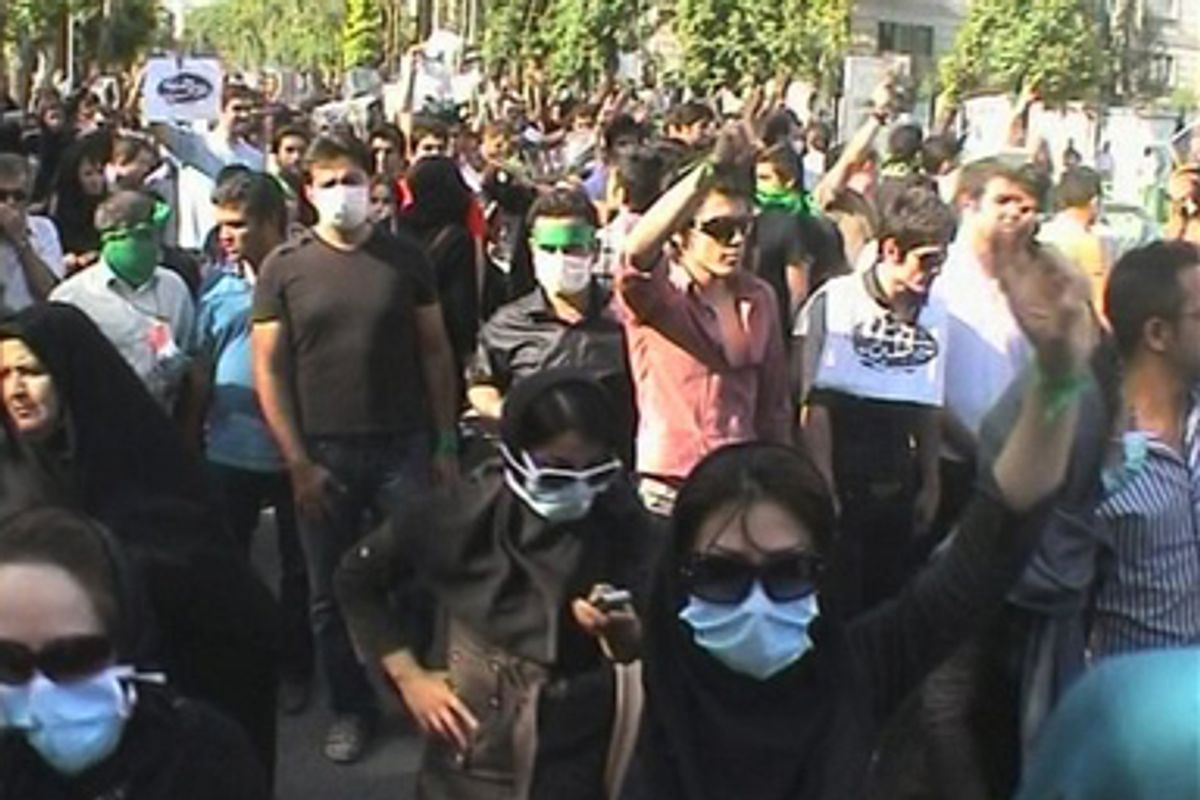 In this frame grab taken from amateur video, supporters of Iranian reformist opposition leader Mir Hossien Mousavi demonstrate in Tehran, Iran, Tuesday June 16, 2009. Thousands of protesters rallied in Tehran in support of Mousavi, according to witnesses and video footage.
--

At noon on Tuesday in Tehran, it is quiet, almost a normal day, but word is going around that there will be a massive pro-Mousavi protest starting in the afternoon at Vali Asr Square. I want to attend, so I grab lunch with some friends in the vicinity. The meal turns into a discussion about what will happen next in Iran, what will come out of current events. My friends are hoping for too much. They are imagining possible outcomes that involve the dismissal of the Supreme Leader, Ali Khamanei, or the quick removal of President Ahmadinejad, or an altogether new election.

A friend, Mohsen, who is close to the leadership of the Mousavi camp joins us. It doesn't look like Tuesday is going to belong to the reformists. Mohsen tells us that riot police are being deployed all around Vali Asr, but the government didn't issue permission for any pro-Mousavi marches today. It's a recipe for legally sanctioned confrontation. Meanwhile, everything is officially approved and legally prepared for pro-regime marches. A pro-regime rally has been planned for the same time and place as original pro-Mousavi rally.

I say pro-regime here because it's hard here to distinguish pro-Ahmadinejad from pro-regime. There is no meaningful difference between supporters of the regime and supporters of President Ahmadinejad. The same people, over and over, throughout the years, come to marches in favor of whatever policy or candidate is favored by the Supreme Leader, Ali Khamanei. These protesters, most of them, are brought to events by buses and cars from their work at government offices. They are content with their lives and expect others to be content as well. They are excluded from the official and unofficial sanctions that other people face everyday.

After lunch, we go to a friend's office. As he sends faxes and makes phone calls, Mohsen tells me people shouldn't go to Vali Asr. The pro-regime protestors are about to occupy that space and Mousavi headquarters fears for the safety of Mousavi supporters. A new assembly place for Mousavi supporters has not yet been confirmed, but it will probably involve marching from Vanak Square north to the Jaam-e-Jam neighorhood on the edge of Tehran, winding up in front of the IRIB [Islamic Republic of Iran Broadcasting] TV building.

As soon as I get the news I check with some of my close friends who are participating in the protests to see if they're okay and to let them know of the new plans. It turns out most of them are well-informed already; word spreads quickly by cellphone and internet. But when my friend Noushin asks me to alert others so they won't end up in the wrong place, I can hear a change of tone, a grief, that stems from Monday's violence. Unofficial numbers put the dead from Monday's marches at more than 10. Some of my friends abandon their plans to march on Tuesday.

Then Mousavi headquarters calls Mohsen with concerns about the new route too. It is still unclear to me what the Mousavi campaign's official policy is on the day's protests. I see and hear hardly any other coordination or centralization efforts.

The pro-regime march is scheduled for 4 p.m. Some time after that I leave my friend's office. A few police in plain clothes are in the alleys that end in the main street, which feeds the stream of Ahmadinejad supporters heading towards Vali Asr. By taking this direction the march and the police could easily engage with a pro-Mousavi march if it were still going in that direction. From 7-tir Square to Vali Asr Square there is no sign of Mousavi supporters. Helicopters are maneuvering above. They are obviously military. Rumors have been swirling in Tehran about the possible engagement of conventional military forces to quell unrest.

While the single official, organized pro-regime rally in Vali Asr is going on, there are reportedly three protests by reformists already underway. There is a gathering in Azadi Square, a small pro-Karroubi demonstration by Sa'ad Abad Palace, and the assembly in Vanak Square that Mohsen had told me about. I leave for Azadi Square, with hopes of making it to Vanak Square later.

In the main street I pass a growing number of pro-regime marchers headed toward Azadi Square, crying out provocative slogans. There are thousands, and they seem ready for conflict. Why else would they head for a place they know is filled with at least the same number of pro-reform protesters?

When I reach Azadi Square, the stream of pro-regime protestors is still minutes behind me. It is 7:30 and night is falling. The vast space of Azadi, with the vaulting, 50-meter white marble tower in the middle, is swamped by people. They are mostly silent.

But the pro-regime forces are closing from Enqelab street, in numbers, fast, shouting rallying cries, with a shield of riot police in front. Once the pro-regime throngs arrive the Mousavi supporters start shouting slogans in response. Fires are started. Impossible noise. People tear a wooden structure to pieces and make sticks out of it -- to burn, or to wield in self-defense?

The riot police make way for the pro-regime marchers to progress. The police shoot tear-gas at the pro-Mousavi crowd. People break and run away, and then run back towards the police. Eyes are sore. It is hard to see in the dust and smoke that fills the air, but the violence has begun. Before it escalates I hitch a ride on a motorcycle and leave. I'm heading north to Vanak Square, which is now said to be jammed by 1 million pro-Mousavi protestors. En route the motorbike driver tells me of rumors of smaller clashes in two or three other places.

When I arrive in Vanak Square at 9 p.m. I can see the difference. Instead of hosting a chaotic contest between opposing forces, Vanak is relatively peaceful and organized. It is flooded by pro-Mousavi protesters, many with their hands in the air. Most are young, many are students, but there are middle-aged protestors too, and families. There are riot police, but no plainclothes cops to be seen. I start talking to people. A man estimates there were 2 million people when the protest started at 5 pm. Many of them left the peaceful and silent strike when it ended in front of the IRIB building to the north. Many are now coming back from the IRIB building and entering the square.

A kilometer to the south of Vanak Square, pro-regime marchers are gathered in the hundreds, but they are standing still. Yet there is violence nearby. In Gandhi Avenue, one of the main streets by Vanak Square, crowds are engaged with riot police or basiji paramilitaries. Shootings are heard. I confirm rumors that at least three people are shot, two adults and a child, around 12, who is badly wounded. People carry them to ambulances parked in Vanak. Sirens wail, and people anxiously spread the word about the incident with the child.

The riot police turn off the streetlights so people will leave. The police make a line to shape the crowd. I get close to some officers who are resting on fences, side by side with the crowd. I offer a cigarette to one of them and try to make conversation. I speculate aloud that if there were going to be any attacks by plainclothes police, they would have come earlier. The officer nods and raises an eyebrow. Other people come around to chat with the police. During the past four or five hours, despite the scuffles in the side streets, and the firing of two tear gas canisters, relations in Vanak Square itself have been friendly.

In the square, another hour of calm passes. The police start to disperse people peacefully. They ask in friendly tones but are only able to push back people several meters to the north. Some officers, clearly higher in rank, joke with the crowd. They obviously want this to end soon.

About 11 p.m., I head south, back toward the center of Tehran. At first, I see just one plainclothes policeman. But as soon as I've walked another 500 meters a pack of plainclothes cops begins to emerge. The further south I go the number of plainclothes officers and parked motorbikes grows disturbingly. I count more than a hundred bikes. The cops are armed with sticks. Suddenly all jump on the bikes in groups of two or three, start and head north toward Vanak Square.

I need to get back there and warn people. But events, and the cops, are moving too fast. I try to look calm, keep smoking a cigarette, and turn around and walk slowly back north as if that was where I intended to go all along. Several bikes come onto the sidewalk. Behind me they start beating up the middle-aged men that were sitting on the sidewalk. I keep walking. The cops pass by me and a meter in front of me they start beating and cursing a man who has fallen to the ground. I pass by. A hundred meters and I will get to the crowd where I can continue reporting, and can tell people the batons are coming.

But now people are running south towards me, scared, from Vanak Square. I'm trapped at the beginning of an alley. There is no way I can get to Vanak. I duck into the dark alley and walk. A group of bikes enter the alley and head to the end and stop. Once I get close by I hear one of them cursing and shouting at the others for beating mere passers-by. They dismount and start walking down the more remote streets on foot urging anyone they encounter to go home. If the people they see look suspicious, they set on them with their batons. Before I know it they have occupied the whole neighborhood.