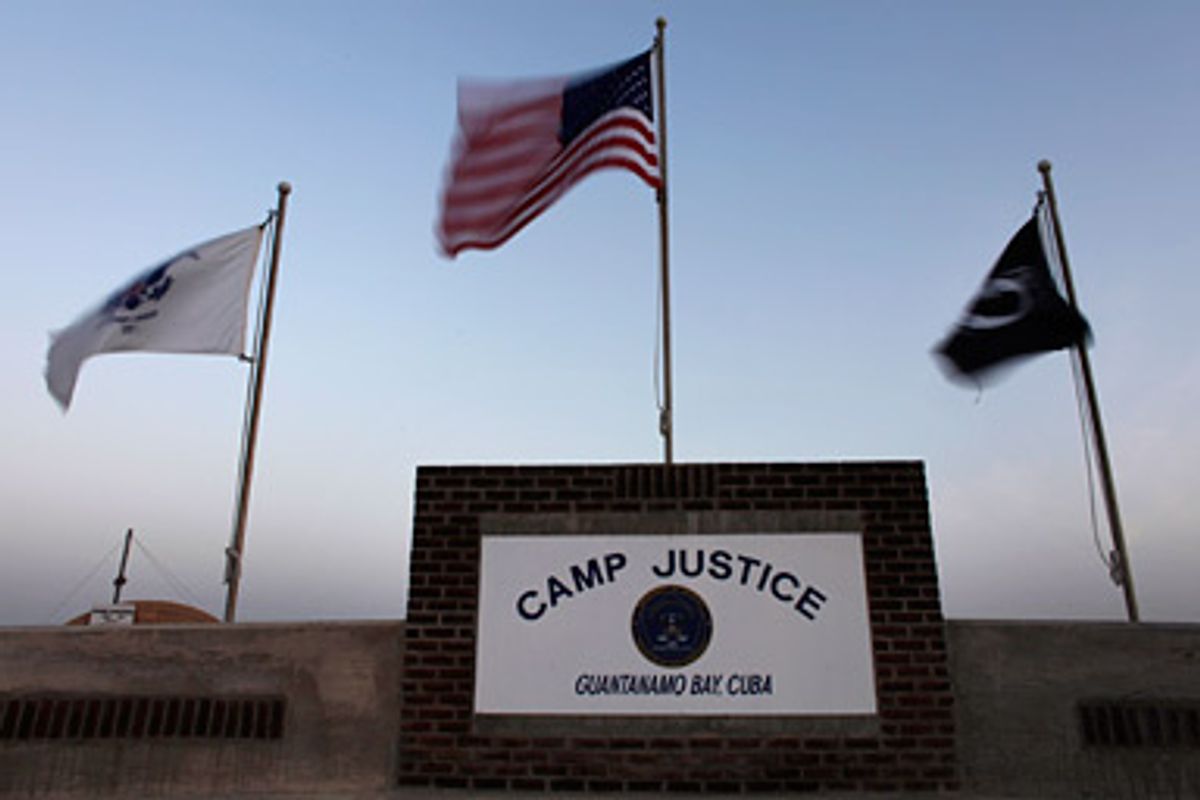 Flags wave above the sign posted at the entrance to Camp Justice, the site of the U.S. war crimes tribunal compound, at Guantanamo Bay U.S. Naval Base in Cuba May 31, 2009. A session of the Guantanamo war crimes court began Sunday for Canadian Omar Khadr who is charged with killing an American soldier.
--

Torture is a crime and the United States engaged in it. Those are two indisputable facts. Given the mountains of evidence already in the public domain, any effort to deny or soften that harsh and devastating reality is either disingenuous, uninformed or a result of the human instinct to avoid painful truths. But one of the things that allows our democracy to endure is that time after time, no matter the misdeed, we have been willing to look ourselves in the mirror, acknowledge our wrongdoing and hold ourselves accountable.

Both of the authors of this piece chose professions devoted to protecting democratic principles, human rights and the rule of law. One of us is an Army prosecutor who resigned from six pending Guantánamo cases due to ethical failings of the tribunal system, and the other is the leader of the premier civil liberties organization in the U.S. We both understand that the process of self-examination and accountability has been, and remains, the only way to move forward and regain our moral and legal grounding.

To date, the evidence that U.S. officials engaged in widespread and systemic torture and abuse of detainees with the authorization of the highest Bush administration officials comes from a wide range of sources. There are congressional reports, journalistic investigations, detainees’ own accounts, and even -- astonishingly -- boastful admissions by some of the highest officials of the Bush administration, including former Vice President Dick Cheney, who has been aggressively forthright in his defense of torture methods including waterboarding. An ACLU Freedom of Information Act lawsuit has also produced more than 100,000 pages of revealing government documents, including the now well-known Justice Department memos laying out the legal framework for the Bush administration’s torture policies. And despite President Obama’s unfortunate decision to reverse his administration’s earlier intention to order their release, we know there are thousands of photographs depicting detainee abuse in overseas prisons beyond Abu Ghraib. While likely to be disturbing -- as they should be -- these images of human brutality would serve to confirm the pervasive and orchestrated nature of these crimes.

But notwithstanding all this evidence that domestic and international laws were violated, there are still those who would reduce these crimes to discretionary policy decisions subject to legitimate debate. There is even a robust public discussion about whether "torture works" -- a jaw-dropping debate to be having in the United States of America -- as if that could be reliably determined, and as if that would make it OK.

This cannot be the way forward in a country committed to the rule of law that applies to everyone, regardless of status or position. We have a Department of Justice for a reason, and now it’s up to Attorney General Holder, the nation’s top law enforcement officer, to do his job and appoint an independent prosecutor to follow the evidence where it may lead. In this country, we investigate crimes and, when appropriate, we prosecute them. Once we start compromising our principles and laws because it is too messy, too inconvenient or even too painful to enforce them, we render them meaningless. This is not a political issue, but a moral and legal one.

To date, the highest-ranking officer to be prosecuted for detainee abuse is a lieutenant colonel who was acquitted by a court-martial panel. Yet there is simply too much evidence of high-level orders and authorization for the use of torture and abuse to justify limiting criminal investigations to those in the field. What does it say about our commitment to justice when we are willing to sacrifice a few at the bottom but unwilling to hold accountable those at the top? When we are willing to prosecute military personnel but not the civilian officials and contractors who were also part of this horrific enterprise? What kind of legacy does that leave for future generations, and future administrations, when it comes to the consequences of those in power breaking the law?

There are some who might find it surprising to be hearing from the two of us together -- a civil libertarian and an Army officer. But to us, the fit is quite natural. While having taken different paths, we have both sought the same destination: the preservation of American values, the rule of law and human rights. Without accountability, we cannot preserve those ideals. Without holding ourselves to the standards we wish to impose on others, we cannot move forward and we cannot hold ourselves out as a nation that adheres to a legal and moral code of conduct. It is critical that we hold accountable those who authorized, those who legally sanctioned and those who implemented the torture policies of one of the darkest periods in our nation’s history. What is at stake is nothing less than our democracy.

Anthony D. Romero is the Executive Director of the American Civil Liberties Union.

Army Lt. Col. Darrel Vandeveld served as a prosecutor in the Guantanamo military commissions and resigned from six cases due to ethical problems with the tribunal system.