The unbearable lightness of Lauren Conrad 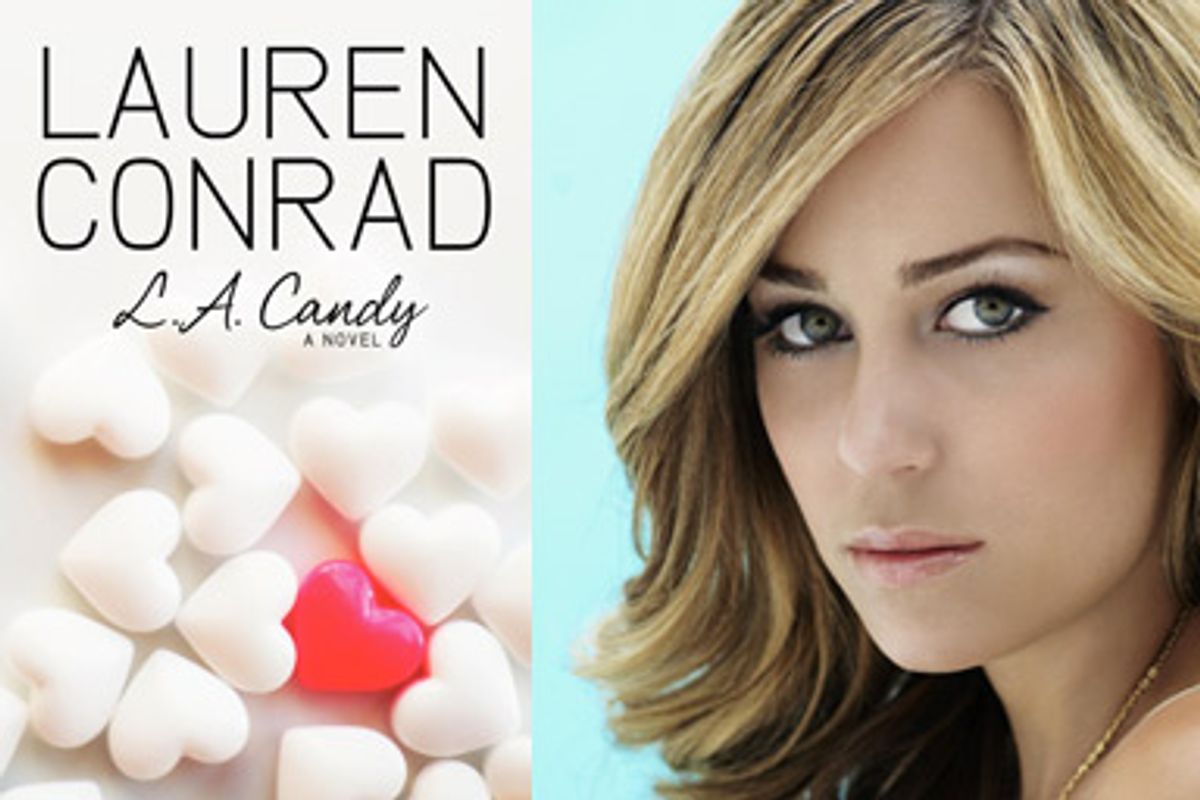 Last night, Lauren Conrad made an appearance to sign her novel, "L.A. Candy," at the Barnes and Noble in Tribeca, in Lower Manhattan. A cramped crowd of about 500 young girls, parents and twentysomething men and women turned up, many of whom had waited for hours for their chance to meet the star of the MTV show "The Hills." Bookstore staff announced that there would be no photos with Lauren, "no personalization of autographs," and that the store had enough security and police officers to remove anybody who lingered too long near the signing table. There was a brief shriek when it seemed like Conrad would emerge unexpectedly from the bathroom. When that proved to be false, the crowd began chanting her name, hoping to lure her out of the nearby storage area.  Ten minutes later, she emerged wordlessly, and stood in front of a row of shouting photographers for a full minute, showing off a silk white top and short black shorts and blindingly glossy lips, before the press got shooed out of the store and she got down to the business of signing books.

One of the first reality TV stars of her kind, Conrad was a "regular" (if very wealthy) teen plucked from obscurity and paid to perform her everyday life for millions of viewers long before the "Real Housewives" started throwing tables at each other near the Jersey turnpike. So it's not surprising that hundreds of teenagers waited in line for hours to see her in an out-of-the-way neighborhood during one of the rainiest days of the year. For five seasons, she's been the star of one of TV's most popular reality shows. "The Hills" has spawned numerous spinoffs, including "The City," "Bromance" and the never-ending real-life clusterfuck that is Heidi and Spencer Pratt. She and her "castmates" have practically hijacked the gossip magazines.

But there's also something rather mystifying about the Lauren Conrad phenomenon. For one, there isn't anything particularly memorable about her -- in fact, she’s probably one of the dullest major characters in reality television history. In the "Hills" universe, Heidi is the mean one; Whitney is the smart one; Audrina is the ditzy one with the dead, dead eyes; and Lauren is, well, Lauren -- not especially charming, not the prettiest, not particularly interesting or talented, but somehow vaguely likable, or at least likable to a certain segment of the population.

And likable enough, apparently, to compel some fans to make a very long trip for a book signing. Kim Long, a 25-year-old, traveled from Boston on two hours' sleep because "Lauren Conrad is not like your typical reality star." She likes that Lauren isn't a snob, she said, that unlike other characters on the show, she actually cherishes her friends. "She's real," she said. "She's someone you'd want to hang out and watch a movie with," said Colby Giordano, a 16-year-old New Yorker waiting in line with her two friends. "There's nothing wrong with being boring."

Much of the appeal of Lauren Conrad, like the Bella Swan character in the "Twilight" novels, is that she’s a near-perfect cipher for young women. It’s her very blankness that made her so well-suited for "The Hills" -- and a much better choice of star than the woman who will replace her on the show, Kristin Cavallari, because she doesn’t create drama. Drama happens to her. It’s a feeling that many junior-high-age girls (and some grown-ups) can easily identify with: I'm just trying to be nice -- so why is everybody being so mean to me?

That blank innocence and persistent victimhood, not coincidentally, is also the appeal of the main character in Conrad's novel -- a surprisingly entertaining, if somewhat vacuous book for teens about a "Hills"-like reality show. It's also remarkably well-written (she cites the best-selling novelist Nancy Ohlin, née Butcher, as a "collaborator" in the acknowledgments). "L.A. Candy" tells the story of Jane Roberts, a recent high school graduate and aspiring events planner who moves to Los Angeles with her best friend, Scarlett, for an internship at a high-end party agency. Just like Conrad on "The Hills," Jane is well-meaning and a bit naive. She's awkward around boys, sexually conservative (by Los Angeles standards), and ambiguously "creative."

Meanwhile her roommate Scarlett, a freshman college student, is described as a "rebel with off-the-chart SAT scores" (as evidenced by her "cogito, ergo sum" coffee cup and the fact that she reads Gabriel García Márquez in the original Spanish). The plot kicks off when the two head out to Les Deux, the L.A. club and site of many a "Hills" martini flinging. The two are approached by a reality TV producer named Trevor Lord. The girls are "exactly what [he's] looking for" for his new show, he claims, and before long the two are being miked up for their first night of filming for "L.A. Candy," a series about four young women living in Los Angeles.

But, as the cliché goes, Jane and Scarlett soon discover that reality show fame isn't what they bargained for. They're forced to disingenuously interact with the other "stars" of the show -- a mean-spirited girl named Madison and a dim bulb named Gaby. Producers make them repeat flubbed lines of "dialogue." Jane can't tell if boys' advances are the result of her charms or the surrounding cameras. Trevor Lord is revealed as a calculating manipulator. And, to cap things off, the aspiring actor of her affections totally won't sign the show's release form.

In fact, many of the book's plotlines and characters will seem very familiar to watchers of "The Hills." Jane encounters a "twenty-year-old celebuspawn" named Jesse Edwards who is "mostly known for his looks and the girls he [dates]." Her bitchy costar, Madison, becomes jealous of her voice-over narration for the show, and hatches a plot to release photographs of Jane hooking up, and Jane gossips at the agency with a "conservative, but pretty" co-intern named Hannah.

All of these elements make "L.A. Candy" one of the most bizarrely meta projects in recent memory: a novel partly inspired by the events of a partly scripted reality show, purportedly written by one of its stars but more likely ghost-written by a novelist pretending to be her. To make it even more meta, the novel doubles as a claim to Lauren's "realness" and an attack on reality television itself; Jane just wants to live her life as honestly as possible -- and plan celebrity parties, dammit -- but is foiled by the producers' meddling and the distorting lens of the camera.

To put this into perspective, Conrad now faces the daunting task of leveraging her generic persona into a long-lasting career; after all, how do you continue to captivate the public's attention if you're known for being like everybody else and staring blankly at your costars? You can, on one hand, try to branch into a legitimate industry, like fashion (which Conrad has attempted and failed to pull off), or continue milking your manufactured reality show fame -- while pretending to be above it -- for many years to come. Given that "L.A. Candy" is the first of a three-book series, it seems that she's opted for the latter (she's also expressed interest in turning it into a movie).

Will that be enough to keep the fans' interest? Leslie Notor, a 48-year-old from Princeton, N.J., who watches "The Hills" with her daughter, says she won't be tuning in to the next season ("because Kristin Cavallari is a ho"), but she isn't sure what to expect from Lauren now that she's left the show either. She'll probably be following her in the magazines, she says. "I'm interested in reading about her boyfriend stuff."