Khamanei weeps, he tells us there was no vote rigging, and he seems to give a green light for a crackdown 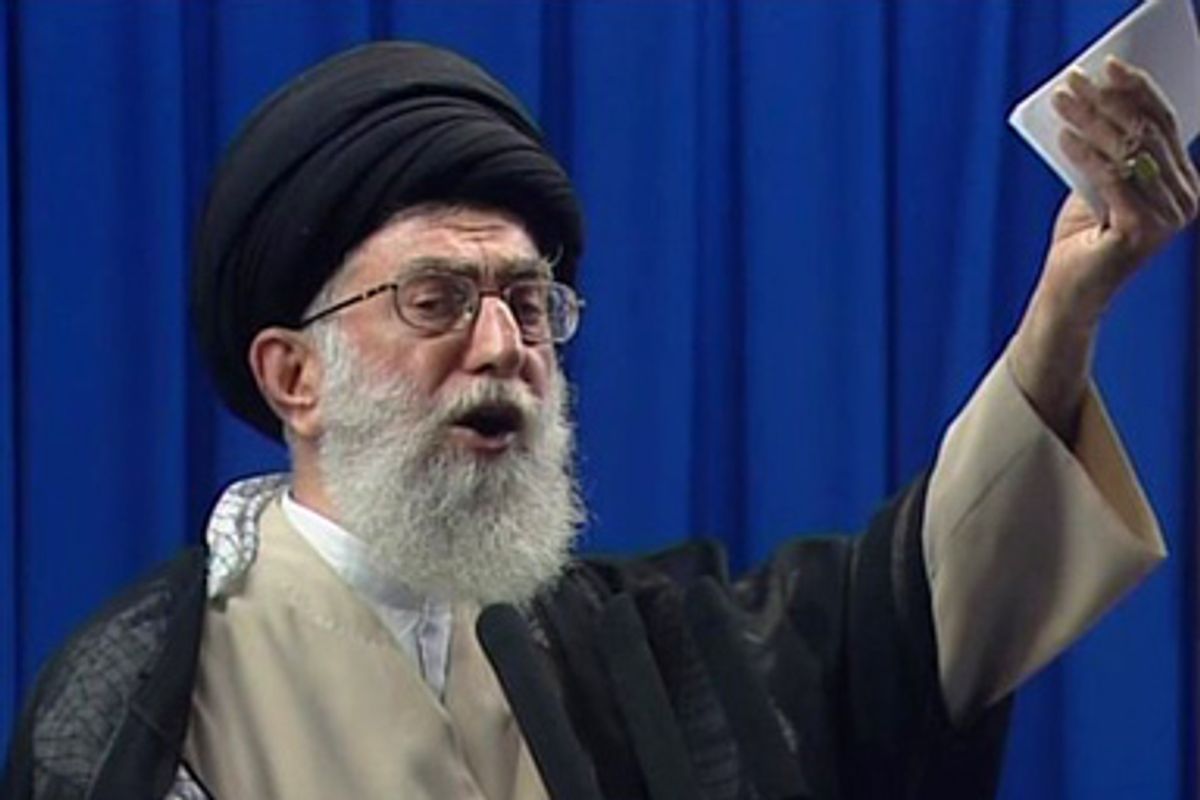 In this image made from video broadcast by Iran's IRIB television, Friday, June 19, 2009, Iran's Supreme Leader Ayatollah Ali Khamenei, makes his address as part of Friday prayers at Tehran University.
--

It is Friday prayers, and the venue is the open-air mosque at Tehran University, but the event looks more like the old Red Square May Day parades. All of Iran, watching in person, or on television, takes careful note of who is there, and who is not. Supreme Leader Khamanei is there, as is President Ahmadinejad as are Larajani and Haddad Adel. So is Mohsen Rezai, former commander of the Revolutionary Guard and one-time electoral foe of Ahmadinejad, sitting in the back of the VIP section. Karroubi, Mousavi, Rafsanjani and Khatami are not.

Supreme Leader Khamanei starts speaking. He emphasizes that difference in opinion, difference in program between candidates is normal, natural. But beware, he says, for months the enemy had been laying the groundwork to label these elections a fraud. "The enemies of Iran are targeting the Islamic establishment's legitimacy by questioning the election. ... After street protests, some foreign powers started to interfere." With the exception of the vote for the Islamic Republic in spring of 1979, Supreme Leader insists, this election was without rival. Iran represents a third way, between dictatorships and the false democracies of the rest of the world.

When Khamanei speaks of the violence, it is clear that the regime is laying the groundwork for a crackdown. Chaos has to be stopped. The way of the law, rahe qanun, must prevail. There are laws and we cannot allow the killing or violence to continue, either by basijis or opposition. But it is clear whom he holds responsible. "The result of the election comes out of the ballot box, not from the street," he says. "If there is any bloodshed, leaders of the protests will be held directly responsible."

Khamanei continues the regime's strategy of complimenting Mousavi and the opposition and laying all blame for unrest on foreigners -- the U.S., the U.K., Zionists -- and on hooligans in the streets. He lauds his rivals, by name, and cites their long record of service to the country. He says he has known Rafsanjani for 52 years, and that while there is corruption in Iran, no one can say that Rafsanjani is corrupt. This is clearly a slap on the wrist to Ahmadinejad, for what Dr. A said about Nategh Nouri and Rafsanjani during the presidential election debates. Khamanei defends Mousavi, Karroubi and Rezai, who is present, as good men devoted to the Islamic Republic.

Then we came to the kicker of the speech, a turning point. He takes sides between Ahmadinejad and Rafsanjani. Mousavi may have been Ahmadinejad's opponent at the ballot box, but Rafsanjani is his true rival for power. "Since 2005 there has been a difference of opinion between these two men on foreign affairs, social, cultural and economic issues," he says. "Ahmadinejad's opinions are closer to mine." The audience cheers.

And what about charges of vote rigging? In another flashback to Red Square, the supreme leader declares that night is day. He takes a shot at recent U.S. elections -- cheating can occur, he charges, when the difference in the votes is close, 100,000 or 500,000 or 1 million. But 11 million? How can that be cheating? "Iran's laws do not allow vote rigging. With these laws, how could it be possible to have such vote rigging." Iran has a process, he says. "We will count the votes with the representatives of the candidates present. The Guardian Council will fulfill its obligation."

In fact, the green light has now been given to the basij to kick ass and take names. "The way of the law is open," he says. "If people continue to take the other way, I will come back and speak more directly." Qanun, qanun, qanun. Law, law, law. His emphasis on the need for law and order.

By the end, uncharacteristically, the leader, gets hot. Interjections from the crowd interrupt him and he tells them to stop and listen. He talks about the U.S. and the West and how the U.S. wanted to launch a spurious velvet revolution in Georgia. He says that these "aqmaqha" -- idiots -- think that they can do the same in Iran.

And then he ends by weeping. He tells Iranians that he loves us more than we can know. Ten years ago, Khamenei wept publicly when students were protesting in the streets. That's when regime loyalists began to crack down.

"Our vote is written in blood, and we gave it to the leader," the mosque crowd yells back.

Things do not look good. It is worse than it ever was.