At Thursday's pro-Mousavi rally, honoring those who have been killed in the post-election protests 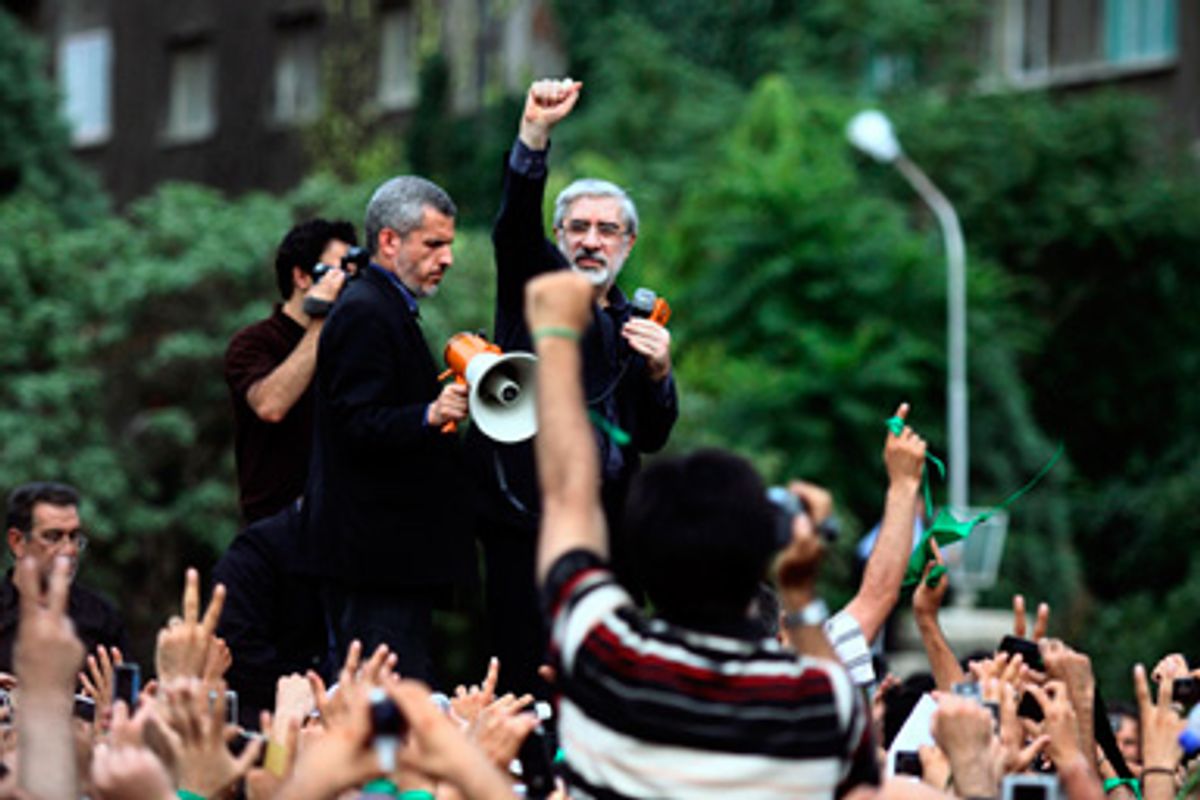 The crowd pushes in. I think of those scenes from the Tokyo subway, where the officers with the white gloves squeeze and pack with all their might. On the Tehran Metro on Thursday afternoon, we are all arms, legs, elbows. Even for a country with no notion of personal space the compression on the train is incredible. Anyone who was in D.C. for Obama's inauguration will remember the scenes at the Capitol Hill metro stations. This tudeh, or mass, is as dense, maybe denser. These days every day is Inauguration Day in Tehran.

Someone in my packed car jokes, "Today Hashemi carries us to victory!" He's referring to the fact that the metro system, a notorious cash cow, a hole in the ground where money disappears, is run by former president Hashemi Rafsanjani's son.

Spirits are good. It's after 4 in the afternoon, cellphones are completely down, but everyone already knows where to go and what to do. Today we wear green and we wear black -- black for those who have died during the past week.

Darkness to light, and we pour out of Imam Khomeini Station and into the square of the same name. Already the crowd is huge. Citizens have arrived early, not the customary one to two hours late -- Iranian time, as it's known. The weather has returned to normal this week. It is hot, and we are made hotter by the darkness of our clothing. Fat, full clouds dangle from the sky, and rain feels imminent.

Other than the sheer size of the demonstration the main thing that strikes the observer is how quiet it is. Nothing above a murmur. No one moves. Today's theme, captured in hundreds of handmade signs, is "sookoot e sabz," or "green silence." We are here to mourn the fallen, those who have died in the past few days at the hands of the paramilitary basiji. The chants that played such a prominent role prior to the elections and which here and there can be heard, are contained by the "shushes" and "quiets!" of the crowd. Perhaps after 30 years of chanting the best way to answer is with silence.

That Imam Khomeini Square is so still it borders on a minor miracle. Formerly known as Toopkhone, literally "cannon house," this square is one of Tehran's most storied. It was once the site of regal state ceremonies and Dar al-Funun, Iran's first modern college, built in the 19th century. In recent years, Khomeini Square has settled into its current role, a major south-central transit hub covered in ashen grey and lined on three sides by small shops and boarding houses for itinerant workers and their families.

To the south of the square rises the smooth glass of the mokhaberat, or telecommunications building, built in the doleful international style so common in the developing world. From the building, they watch us. We can see a man on the fourth or sixth floor filming the goings-on with a tripod-mounted camcorder.

The state is taking pictures of us. We show them, in turn, photos of what they have done to us. Many hold up the pictures of the wounded and killed, gruesome images of blood-covered chests and heads, the young and the middle-aged who have fallen. There is a picture of a plainclothes basiji rushing at a protester with what appears to be a cattle prod or perhaps a knife. His face is clearly visible. On some of the pictures of the basijis people have written the word "killer."

This is important. Things are moving faster. The old-timers, the ones who had seen 1978 and 1979, when the shah fell, tell us that it took months for it to get to the same point we are now. Then it began with the college students. First the students came out, then the families, mothers famously sending their sons forward to face the soldiers of the shah. We are not yet a week out from the voting and the movement is already filled with different ages and occupations.

I do not believe that this is a revolution, however. People have seen what that brings. The comparison to 1979 is limited. Nonetheless, many of the contours of the two are shaping up to be the same.

The crowd gathers around a woman and a man. They are speaking in anguished tones. The woman, older, has her face covered like so many others here -- fear still remains despite the strength of numbers. I can see only red, red eyes. "Chera? Chera?" she asks. "Why? Why?"

We ask who she is, what has happened. We find out that she is a mother of a young shaheed, or martyr. People reach for their mobile phones to take a picture and the man who is comforting her beseeches them to put the cameras away, to have sympathy for her.

A kid grabs my arm and tells me to come, come take a picture of his friend. The friend is in bad shape. They lift up his shirt and we can see the bruise where the baton struck him. When he turns around I see that there is a white dollop on his head, a fresh bandage. I grin and tell him that he's the champion of the people. He laughs.

We finally start to move, slowly, feet shuffling northward toward Ferdowsi Square several kilometers away. People debate what to do next. Should we go to Friday Prayers tomorrow, where Supreme Leader Khamanei will speak? Should we let them know that we respect and accept our Rahbar, our supreme leader, this nezam (system) and revolution? Or do we stay away? It might be better not to antagonize the crowd that Khamanei and Ahmadinejad and the regime loyalists will draw. There are reports and rumors that the basiji will be out in full force on Friday, that the supreme leader will speak and no doubt cast his final verdict on the elections. It is ultimately decided not to go -- decisions are made collectively with this crowd, unlike the top-down gatherings of the pro-Ahmadinejad forces. A new song passes through the crowd in waves: "Farda khabari nist! Farda khabari nist!" It means, "Tomorrow there is nothing going on! Tomorrow there is nothing going on!"

"Agha, Ferdowsi am ba mast!" a young man tells his friends and points toward the statue in Ferdowsi Square. Iran's national poet, the author of the epic "Shahnameh," has been cloaked around the neck and the wrist with a green shawl. "Ferdowsi is with us!"

But now Mousavi shows up, we're told. He and his entourage are moving on the other side of the square. He is minuscule, impossible to hear, impossible to see.

"Bishin agha! Bishin! Sit down, sit down!" We squat on our hams like soccer players lining up for a photo. I hold onto the shoulders of the guy sitting next to me. Mousavi never rises far enough out of the crowd for us to see him but we can track his progress through the press by the security and cameramen standing on top of his car. They float above the heads of the thousands gathered and make their way north.

Exhausted, thirsty, I make my way back to the metro.