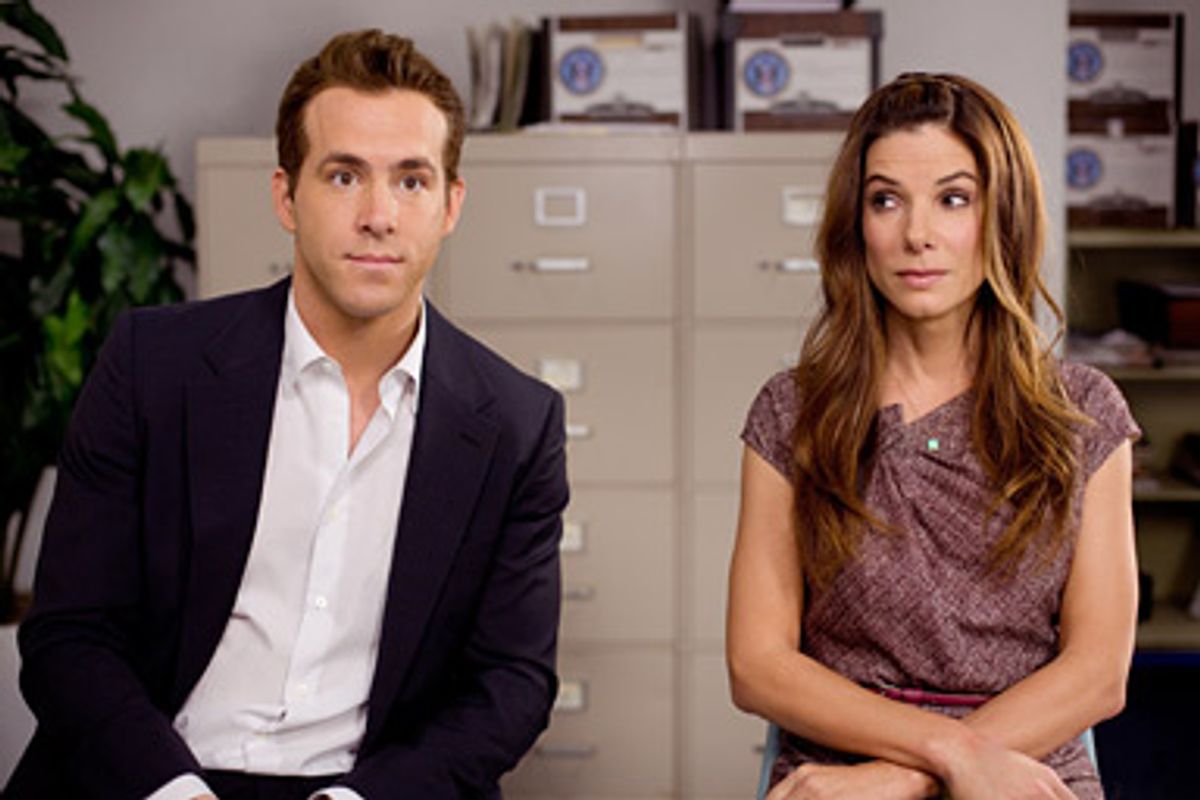 Ryan Reynolds and Sandra Bullock in "The Proposal."
--

"The Proposal" is a romantic comedy set in mythic days of yore, a fantasy era in which a grown-up could actually make a living -- and even become financially successful -- by working as an editor at a publishing house. If you can suspend disbelief enough to run with that crazy concept, you'll have no trouble buying the idea of Sandra Bullock as a rather monstrous Manhattan publishing executive who, in order to avoid being deported to her homeland of Canada, blackmails her earnest, hardworking assistant (played by Ryan Reynolds) into marrying her. The expected romantic complications ensue when Reynolds' character, Andrew, brings bitchy bride-to-be Margaret to his Alaska homestead, where his grandmother (played by Betty White) is about to celebrate her 90th birthday, and his parents (Craig T. Nelson and Mary Steenburgen) both, for different reasons, bemoan the fact that they rarely see their son. When Margaret begins to see Andrew as a person and not just an eager gopher, she begins to see the error of her ...

But you already knew that, didn't you? There's nothing unexpected or particularly original about "The Proposal," which was written by Pete Chiarelli and directed by Anne Fletcher (whose previous credits include the dread bridesmaid rom-com "27 Dresses," as well as the urban dance drama "Step Up"). A romantic comedy doesn't need to be original to be enjoyable, and yet "The Proposal" still falls way too short of the mark. Its appeal rests on how much we can bring ourselves to love Bullock: She can be an extremely appealing actress (my favorite Bullock performance is in the 2000 movie "Gun Shy," in which she plays an enema-expert nurse), and at worst she's just sort of vaguely inoffensive. It's probably possible to actively dislike Sandra Bullock, but she gives off such an approachable, nice-girl vibe that it barely seems worth the effort.

And so, in "The Proposal," Bullock is certainly watchable, even at times enjoyable. Her Margaret is a tough boss, and not necessarily a fair one: She expects Andrew to anticipate her every whim. When she struts into the office, the employees snap to attention, alerting one another to her presence via IM. She spends part of the movie toddling around in crisp suits and towering Christian Louboutin heels, her hair pulled into a high Barbie Doll ponytail that says, "Look, but don't touch." Both her appearance and her attitude soften during the course of the movie, and it's hard not to feel a grain of sympathy for her character (who lost both of her parents at a relatively young age) when Granny makes a gesture that assures her she's welcome in the family. There's a softness, and a kind of thoughtful openness, about Bullock's face that suggests a girl who always wants to do the right thing, and she brings that quality to her character here.

There's a degree of warmth in "The Proposal"; there just isn't enough crackle, particularly between the two stars. Reynolds, whom I'd pegged as a dull, flavorless actor until I saw his nicely shaded performance in Greg Mottola's recent "Adventureland," actually gives a better performance here than Bullock does. Admittedly, his best moments are the ones in which he's required to wear a look that's the equivalent of a "Vacancy" sign outside an end-of-the-road motel. Reynolds is very good at wearing that look, but he also knows how to subtly tip it over the edge into being inexplicably funny. Though I didn't laugh much at "The Proposal," I'm sure I laughed more at Reynolds than I did at Bullock (even the scenes in which she tussles with a mischievous white puffball of a puppy). Maybe that's because it's easier for me to identify with Reynolds' character, a well-meaning young man who loves to read and wants nothing more than to make even just a meager living as a book editor. His dream should be manageable, achievable. But the one certain grain of truth in "The Proposal" -- at least in light of the current dismal state of the publishing industry -- is that what Reynolds' Andrew wants is even more elusive than true love. "The Proposal" is a romantic fairy tale, all right. If, in the end, Andrew gets the girl and the job, he's the luckiest man on Earth -- not least because he has the luxury of being a fictional character.