Woody Allen and Larry David return to New York, bringing their crotchety self-mockery with them 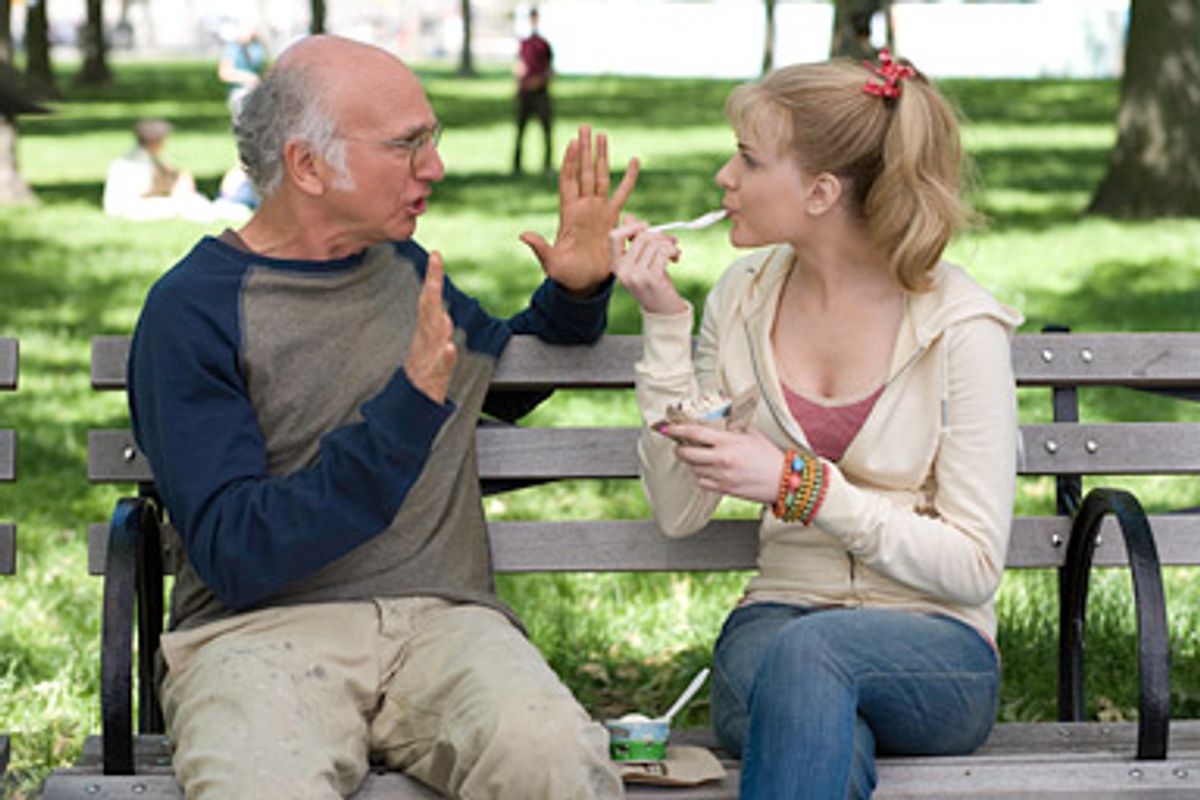 "Whatever Works," a picture that beneath its willfully crotchety exterior is ultimately about finding love, comes as close to optimism as Woody Allen is capable of getting. But it's a graft that doesn't quite take: Allen's return to New York, after several years of making pictures in Europe, is a belabored trifle that's occasionally amusing but often just bewildering, beginning with the movie's intentionally outlandish setup: Boris Yellnikoff (Larry David), a knobby-kneed, plaid-shorts-wearing, know-it-all New York geezer, grudgingly helps a pretty, coltish young runaway with the shiksa-princess name Melody St. Ann Celestine (Evan Rachel Wood). Before long, enchanted by his vast wealth of so-called knowledge (he keeps loudly proclaiming that he came close to winning a Nobel Prize for quantum mechanics) and his willingness to hold forth even on topics he knows nothing about, she falls in love with him. Somehow, his fossilized views about life and art get her very, very hot.

Or maybe it's the knobby knees. Regardless, the idea of a sexy-sweet, undereducated teen runaway falling for a charmless curmudgeon like Boris is a fine enough joke in itself, and Allen is certainly in on it: No matter how many lousy movies he's made in the past 20 years or so, he has enough sense left to see what's funny about the use of old-fart gasbaggery as a seduction tool. And so it would probably be easy enough to defend "Whatever Works" by noting that Allen is just poking fun at himself, and having a grand old time doing it. David (the much-beloved, if that's the right word, star of "Curb Your Enthusiasm" and the co-creator of "Seinfeld") is Allen's stand-in here, and his deadpan surliness suggests an Allen who's aware of his own faults and of his own aged geekiness. He knows it's absurd that a cutie like Melody would fall for a guy like Boris -- or like Allen.

Maybe that self-awareness -- and Allen is, if nothing else, the most self-aware of filmmakers -- is supposed to make "Whatever Works" funnier. But the movie picks its way along in fits and starts. A few gags are lilting and clever, albeit in a silly way, helped along by terrific performers: Patricia Clarkson shows up as Melody's pert but proper mom, a Mississippi matron in matchy-matchy clothes, who upon her arrival in New York sees how limited her life is and sheds her Junior League ways for a far more eccentric boho lifestyle. And the story's numerous farcical turns suggest that Allen is at least trying to return to the kind of lighthearted absurdity that has, at times, made him a brilliant comic writer.

But so much of "Whatever Works" is just strained and overexplained. The picture is less aggressively distasteful than some of Allen's recent so-called comedies ("Melinda and Melinda," "Anything Else"), less pretentious than his dreary moral exercises ("Cassandra's Dream," "Match Point") and less desperately Euro-sophisticated than his last picture, "Vicky Cristina Barcelona." (Although it wasn't intended to be funny, I still giggle when I think of the way the character played by the gifted English actress Rebecca Hall announced she was getting a degree in "Catalan identity." Because of the flatness of her faux American accent -- she'd obviously been heavily coached in Allen-style diction -- I thought her specialty was "cattle and identity.") But the gag of having a charmless lead character who keeps announcing how charmless he is wears thin very quickly. David's Boris is certain he knows everything and makes sure no one around him ever forgets it: He holds forth regularly, hanging out with his chums (played by Michael McKean, Lyle Kanouse and Adam Brooks) at this or that neighborhood outdoor cafe, and now and then faces the camera to address us as well: "I'm not a likable guy," he assures us, and this he quickly proves to be true. He makes money by teaching chess to little kids, though mostly he just loudly berates them for their inferior intelligence. He doesn't talk to people, he barks at them, often out of the corner of his mouth. His derision for those who don't match his level of braininess (in other words, 99.9 percent of the population) is as obvious as a bad toupee.

We're not supposed to like him -- at least not in the conventional way of "liking" characters -- but we're nonetheless stuck watching him, and as David plays him, there's not much there. Everything David does is on the surface, a rehearsed routine; his incessant snarling is supposed to be exaggerated, but it's still too much like a pose. Wood's Melody is, at least, an appealing foil for him, and if at first we see her mostly as Boris does -- as a gangly, gum-snapping naif -- it's not long before we get an idea of her own unvarnished common sense. Wood, doing less pouting and posturing than usual, is a relaxed, lively presence here, teasing her own kind of logic out of wonderfully ridiculous lines like, "If you throw me out and I end up an Asian prostitute, it'll be on your conscience!"

But Allen doesn't get good mileage out of the May-December romance concept. It's not the difference in age between Boris and Melody that makes their relationship seem unsavory. It's just that the character of Boris is so resolutely unappealing. You can see why Melody might be impressed by his steady stream of factoids and opinions. But does she actually have an OK time in bed with him? That's a question Allen never asks or answers, perhaps because he thought it would be in bad taste to do so -- and maybe it would be. "Whatever Works" isn't "about" sex, per se. But you do have to wonder if Allen cares at all what might be going on in the mind of the young woman character he's written. He seems to care most about his alter ego, Boris, the guy who gets the babe. He sees Boris's shortcomings and pigheadedness with piercing accuracy. The problem is that he can't see beyond them.