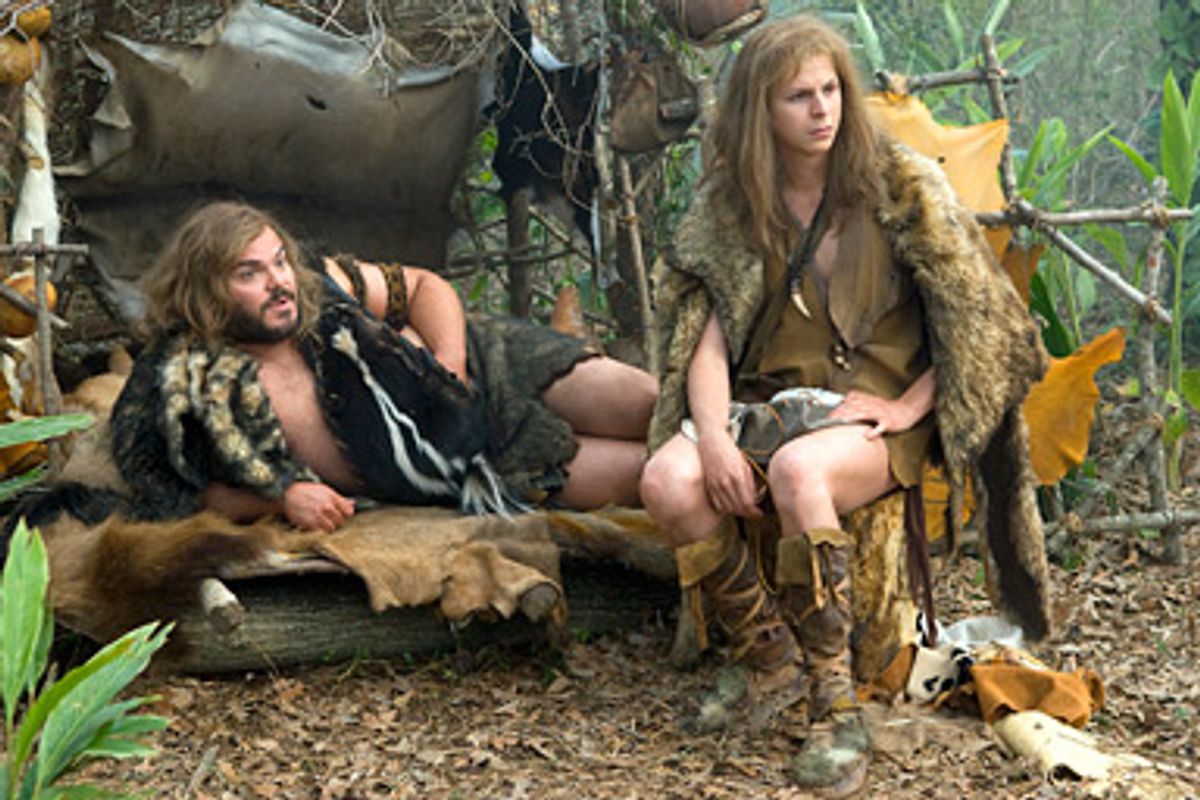 Even if the movies directed by Harold Ramis haven't always been great, there's usually a seed of greatness nestled in the concept. A mob bigwig who works out his insecurities on the shrink's couch ("Analyze This"), a husband who clones himself with absurd and disastrous results ("Multiplicity"): These are ideas that give good actors (in the first instance, Robert De Niro and Billy Crystal, and in the second, Michael Keaton) something to run with. And even if Ramis had directed no movie other than "Groundhog Day," with Bill Murray as a TV weatherman doomed to live the same day over and over again, he'd still be able to claim the honor of having made a masterpiece: "Groundhog Day" is bliss, the kind of comedy that feels so effortless, it makes you wonder why more comedies can't be even half as good. Can making a decent -- let's not even use the word "great" -- comedy really be so hard?

The harsh truth hits like a rock with Ramis' "Year One," in which Jack Black and Michael Cera play lazy Paleolithic hunter-gatherers who stumble through an adventure that includes encounters with squabbling siblings Cain and Abel (played by David Cross and Paul Rudd, respectively), romantic intrigue with a headstrong princess (Olivia Wilde), and an introduction to the novel concept of circumcision at the hands of the prophet Abraham (Hank Azaria). "Year One" is slow to get going and fails to gather the momentum it needs -- it never catches you up in its craziness, the way even a low-quality "dumb" comedy often can. Instead, it ambles along uncertainly, hobbled by the lack of chemistry between its two lead actors, and by gags that either try too hard or suffer from being barely there: With "Year One" (which was written by Ramis, Gene Stupnitsky and Lee Eisenberg) there's no satisfying in-between.

In fact, the funniest thing in "Year One" is the visual idea of Black and Cera (their characters' names are Zed and Oh) as prehistoric hut dwellers: The initial sight of Black, with his sexy barrel belly, and Cera, in all his innocent scrawniness, both decked out in vests of shaggy fur, is momentarily amusing. But the jokes wobble from the beginning: Zed, a hunter (albeit one with bad aim), spears one of his fellow tribe members; Cera, a gentle gatherer who forages through the wilderness for edibles, has resigned himself to the drudgery of locating the berries least touched by bird poop. After Zed devours some forbidden fruit -- that is to say, the forbidden fruit -- he's banished by the tribe, even before he gets to make time with sexy tribe girl Maya (June Diane Raphael). Oh reluctantly tags along with him, leaving behind his own crush, the pouty Eema (Juno Temple).

During the course of their odyssey, which involves unexplained travel through several eras, Zed eats poop, and Oh is forced to rub the chest of a hirsute high priest (Oliver Platt) with hot oil. It's not that those things couldn't potentially be funny. But in "Year One," they simply aren't. The timing of nearly every actor is strained and tentative (with the exception of Azaria, who seems to be on a roll lately, after his entertaining turn in "Night at the Museum: Battle of the Smithsonian"). It's a relief when nerd sensation Christopher Mintz-Plasse (aka McLovin from "Superbad") shows up as Abraham's would-be sacrificial son Isaac. But he has little to do and disappears all too quickly, leaving Black and Cera to carry most of the action.

They seem as indifferent to that task as their characters are to hunting and gathering. Black can be a marvelous comic actor, but he's on autopilot here: There's something mechanical even about the way he arches his fuzzy eyebrows. And Cera, who's building a fledgling career on his shy, deadpan demeanor, gives a performance that's merely watery and indistinct. It's hard to say if the writing and direction in "Year One" has failed them, or if they just weren't able to muster the enthusiasm to make Ramis' gags work. Either way, there's nothing in "Year One" that's even half as funny as Carl Gottlieb's rapturously silly 1981 "Caveman" or Mel Brooks and Carl Reiner's genius "2000-Year-Old Man" (which Ramis has cited as an influence). "Year One" sets prehistoric comedy back at least 20 years.