Going down in the downturn

More women are turning to sex work in a bad economy. Does it beat working at McDonald's? 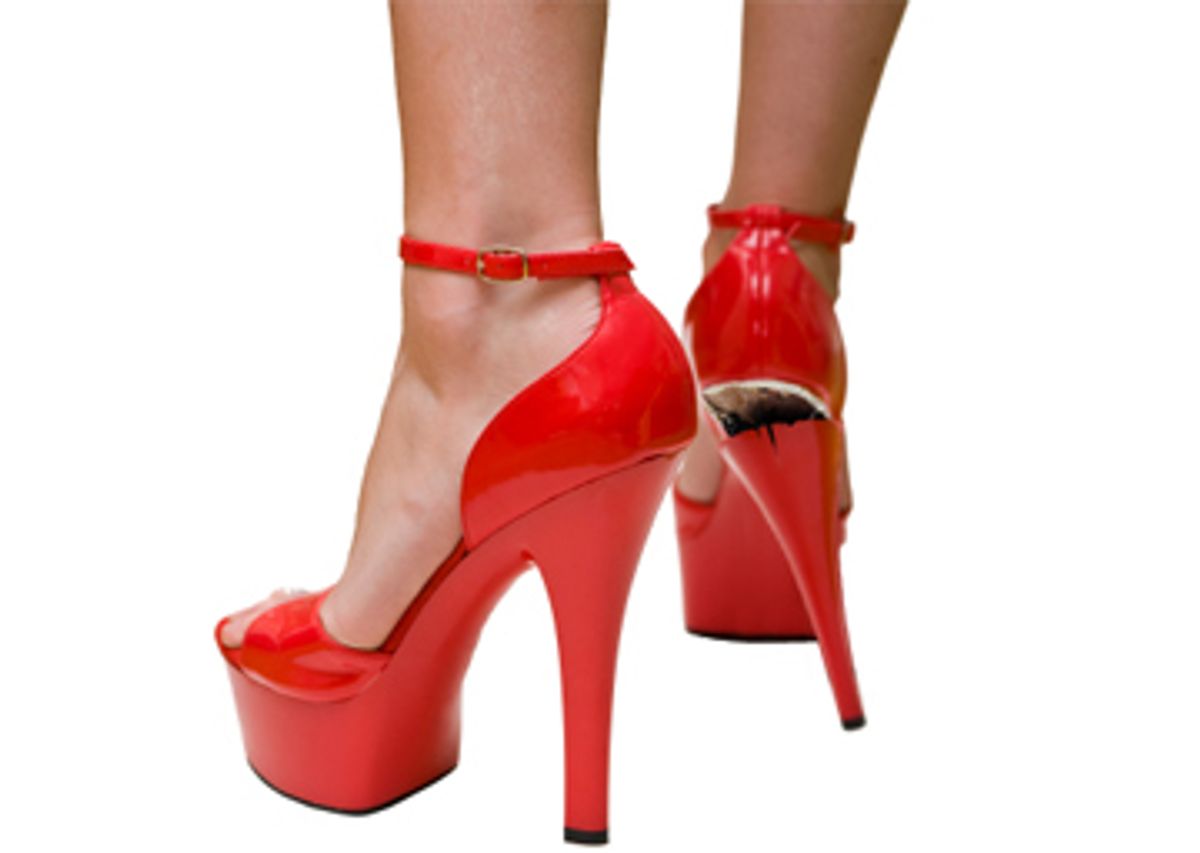 "Boob play," "pics of kitty," "topless housecleaning" and "hypno role play." The list, scribbled in a lined yellow notebook, is followed by a double-underlined figure: $725.

It's 9 a.m. on a Friday and 30-year-old Marie is sitting on her couch clad in Donald Duck pajamas, munching on buttered toast and staring at her cellphone like she can will it to ring. If someone calls in response to the ad she posted this morning on Craigslist, she can add $75 to her projected income for the month.

Five months ago, before being laid off, Marie was bringing in $45,000 a year at Enterprise Rent-A-Car. Now, she operates out of two offices: her living room and a regularly changing hotel room. Her uniform is different, too: Instead of conservative business attire, she dons a lace bra and booty-hugging capris. The former corporate supervisor has become a sex worker.

She's applied for every strait-laced office gig she can find -- regardless of hours, pay or whether her University of California degree makes her absurdly overqualified. She went from being a manager to fighting for personal assistant positions. But last month, after innumerable unanswered cover letters, overdue bills and a delay in her unemployment checks, she entered a world of code words and cash wads. It was baptism by -- bodily fluids: She peed on a guy in her own bed for $100. Since then, she's been paid more times than she can count, or cares to count, for sex, blow jobs, hand jobs and sensual massage.

Of course, Marie is far from the only woman pushed into the sex industry by these harsh economic times. Strip clubs, X-rated Web cam companies and escort managers across the country have reported an increase in job applications in the last several months -- ironically, at the same time that business is largely going down. The same phenomenon was seen after the dot-com bust, when out-of-work techies turned to everything from S/M dungeons to porn sets. Both booms saw a series of salacious news items about good girls gone bad, a narrative that is at least as old as the Bible -- but I wanted to know what was unique about this particular cultural moment.

Industry insiders like to say that they're seeing more "normal" people, girls "with good minds." Mike of A&M Studios, a producer of X-rated video chats, says: "A couple years ago, we'd have a lot of strippers or people who might be on meth -- a lot of shiftier people." He continues, "Now we're seeing performers who are more educated and used to working on a regular schedule. There's been a shift to a very different class of people." Much as his phrasing gives me chills, it isn't just a cliché that women with limited job opportunities often turn to sex work.

The difference in these dark days is that middle-class advantages, like a solid college education and professional work experience, don't offer the same level of protection that they once did from being pushed to make such a choice. Not to mention, it's easier now to make the decision because the Internet has bulldozed the barrier of entry into the sex industry. Just a few clicks away from Craigslist's job board is an array of immediate, cash-upfront adult gigs.

It took me all of five minutes, and a couple of hesitant keystrokes, to create a Craigslist account, verify my phone number and submit a fake adult ad reading, "Looking for some fun? I'm a 30-year-old professional woman who recently lost her job. Now I'm offering top notch sensual services. E-mail for details." An hour and a half later, the posting was approved and a $10 fee was charged to my credit card. The next time I checked my e-mail, I had 68 enthusiastic inquiries, and a photo of a penis, waiting in my in box.

Like a blogger or message board troll hiding behind a handle, I felt safe and unaccountable in my anonymity. I could lean back in my chair and detachedly watch my solicitation bobbing in a sea of nearly 100 other local adult ads. Some argue that prostitution always requires a certain level of disassociation -- letting your brain vacate and your body drive -- but the online marketplace allows for that on a whole new level. Our cultural hooker hard-on has also made selling one's body more tenable. In the age of Sasha Grey and "The Girlfriend Experience," "sexting," "Secret Diary of a Call Girl," Ashley Dupre, courtesan bloggers and strip aerobics, so many girls and women are already flirting with the idea of sex work. Nowadays, it seems we're capable of looking at prostitutes not just with pity, but sometimes admiration -- particularly escorts whose work affords snazzy clothes, designer handbags, fine dining and world travel. (Never mind that those women are largely mythical: As an upscale sex worker told Salon after watching Showtime's "Call Girl" series, "Guys aren't going to pay $1,000 for pussy.") That's not to say that it's socially acceptable to have sex for money, but we're so much more familiar with the idea these days. In fact, Hollywood has walked so many miles in working women's stilettos that HBO is turning to the opposite gender to give sex work some edge: In late June, the channel debuts "Hung," a series about a high school basketball coach who becomes a male escort. We know -- or think we know -- all about sex work, how it looks and what it feels like. The truth, according to most of the newbies I spoke with, is that it's much harder than they expected.

Take 55-year-old Jennifer of the Bronx, N.Y., who was laid off from her financial bookkeeping job: She talks about her entry into sex work with the shell-shocked detachment of someone who's recently lost a loved one. "It's hard. It's an awful thing to have to do."

"How do you cope, considering you can't turn to your family or friends?" I ask. Suddenly, there are sobs on the other end of the phone line and the rhythmic sound of air being sucked in. It almost sounds like she's hyperventilating. "You're the first person I've told," she says. Moments later she has to excuse herself to blow her nose.

Her husband, a subcontractor, also got the boot five months ago. He managed to find a part-time gig but, despite three decades of work experience in her field, Jennifer hasn't been able to land anything. Meanwhile, bills have piled up and they're six months behind on their mortgage; that's why Jennifer started turning tricks on Craigslist.

Jennifer's family thinks she has a temp job. She uses the same computer she shares with her son to post her ads online and e-mail back-and-forth with clients. Jennifer methodically deletes her browser history (although she worries about whether her son can read her e-mails). Her marriage, on thin ice for some time, is now submerged in frigid waters. Sometimes she starts fights with her husband, just so he doesn't get close enough to pick up another man's scent. "I feel like the family would disown me if they knew," she says.

Some women wade into the cesspool instead of diving right in. Alicia started doing adult modeling after losing her job last July as a nutritionist near San Francisco. The 23-year-old single mother masturbated for men in gnarly budget hotels for four months, lying to her boyfriend and living as "two people." Eventually she was doing POV shoots where a guy -- "older than my dad," she says -- would finger her while taking photos. Then, last month, she found a full-time job as a waitress and, much to her relief, hasn't seen the inside of a roadside motel room since.

Like most of the women I spoke with, Alicia wasn't willing to ask for financial aid or a place to crash from her family or friends. For her, it was a matter of pride, of independence, not to mention control. For them, slinging burgers at a fast food joint means you've really hit bottom, while sex work at least allows for the illusion of being in charge. Looking back, Alicia found that calculation didn't exactly compute: "Sometimes I'm like, Dude, why didn't you just get a job at McDonald's? It's a paycheck," she says, slipping into the second person. "But you were at a point in your life where you had zero money to put food on the table. You had to do what you had to do. It's a survival thing." Not to mention a money thing: When it comes to a paycheck, turning tricks trumps minimum wage.

After a while, even I began to wonder what kind of cash could be made -- after all, I wouldn't mind paying off my credit card bills and medical debt. Ken Viper of Viper Entertainment, an X-rated Web cam company, waxed poetic to me over the phone about how one of his girls got paid $1,400 for an eight-hour virtual date in which she ate popcorn and watched a movie. After calling me "babe" for the umptillionth time, he proclaimed: "I haven't even seen you, but just from talking, I know you'd do great." Later, speaking to his colleague at another Web cam company, I found that my reputation preceded me: "Ken told me, 'She sounds hot! You should get her to work.'" I won't lie: For a moment, I contemplated making mad money while talking to lonely divorcés and noshing on microwavable popcorn. (As they say, every woman has her price. Perhaps mine is popcorn.) Just like when you hear about women selling their eggs or auctioning off their virginity for large sums of money, it's difficult not to greedily run the numbers in your head. One Web cam operator told me point blank: You could make three times your current salary.

These Tony Robbins-esque industry pitches have an obvious seductive allure. It's like a late-night infomercial that promises to make your dreams of becoming a millionaire, or having blindingly white laundry, come true. (Buy now for the low price of -- well, the cost is different for every woman, now, isn't it?) When the responses to my faux-adult ad started rolling in -- at a rate of roughly five an hour -- I reflexively calculated the potential income with dollar signs in my eyes. It can seem like a "get out of jail free" card, a lottery ticket, a get-rich-quick scheme.

But the recession reminds us that there are few quick fixes, and there is no get-out-of-jail-free card. For the women I spoke with, sex work was like bailing water out of a leaking boat: You stay afloat, so long as you don't stop.

More and more, Marie seems to be reconsidering her position. One week she was giving a married man a blow job in his car, the next she was turning down a "sensual massage" client because he demanded sex before she offered it. She was signed on to film a porno, but pulled out when the director, and his roaming hands, took personal license with her body. For a few weeks, she talked about getting a professional massage table, so that she could continue doing physical therapy, without the extras, until she landed a corporate job. Now, she's looking for gigs cleaning men's houses clad in a teddy. But if that doesn't work out, a $10 sensual massage ad on Craigslist will net a guaranteed 75 bucks. As prostitution advocate Margo St. James once said, "A blow job is better than no job."