Jon minus Kate plus eight

The beleaguered couple calls it quits, but the show must go on! 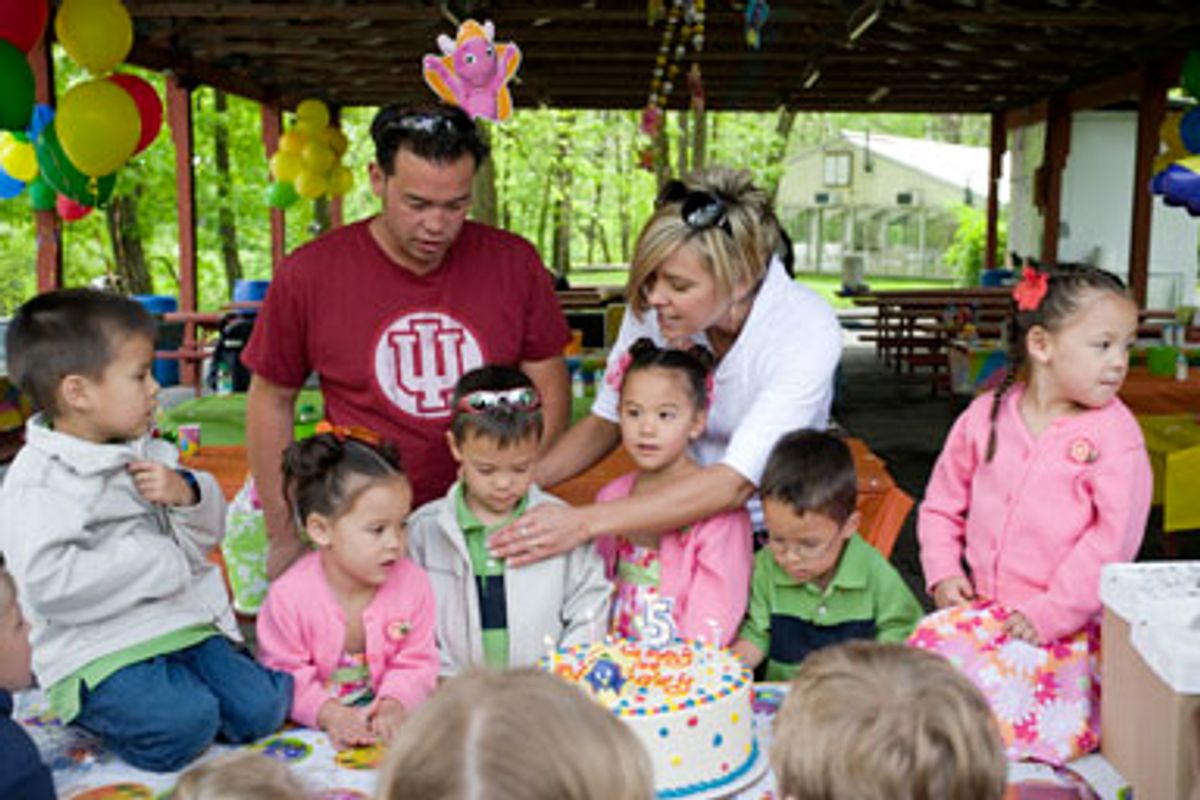 The Gosselin sextuplets' fifth birthday party on "Jon and Kate Plus 8."
--

Reality sextuplet parents Jon and Kate of  "Jon & Kate Plus 8" don't like each other. We don't like them either.

Needless to say, the marriage had to die before the TV show did: Jon and Kate announced that they were getting separated. "I have become very hardened, very crass, very jaded, maybe," Kate Gosselin explained to the camera last night, in her typical hardened, crass, jaded (see also: robotic) tone. "But that is my survival self digging in and saying I will not lay down and die. I will go on for my kids, and I'll say it 'til my dying day. And if I've gotta pull this whole ship on my own, I'm gonna do it. I will survive, and they will survive."

Wait, is Kate talking about her divorce, or her brand-new, single-mom-plus-sextuplets show on TLC, "Kate Plus 8: I Will Survive!"? This is the disadvantage of filming someone whose bread and butter relies on charming the camera and working the publicity circuit: Even vulnerable emotions (however robotically they're expressed) are easy to confuse with promotion. And make no mistake about it, the show must go on.

"How does the show go on?" Kate asks. "I will continue to be here, be with the kids, do the things that I've always done with them. I realize that Jon will not be a part of those. He may do his own thing."

Jon sounds a little less certain of his continued involvement in the show, or of anything at all, really. Like many a passive but resentful husband before him, he's perplexed and disappointed but otherwise has no words for his emotions. All he knows is, he wants out. "It's day by day for me, I don't know what's going to happen. I mean, I could get offered a job or ... and that would change the whole schedule." At least we can respect him for having the audacity to suggest that he might do something else with his life if the show doesn't suit him. Or is that just a strategic maneuver to help with an upcoming contract negotiation?

Gripe as they might over the paparazzi, neither of these two seem strong enough to pull the plug on the publicity machine that's consumed their entire lives. You'd think that Kate might feel some relief, imagining a world where no one would take note when she spanked her kids or denied them water when they were thirsty? Does she even remember the person she was before she had a bad haircut and a book deal and a brother and sister-in-law doing the talk show circuit about her crappy parenting style? (Seemingly well-intentioned people but, let's get real, who deals with their concerns about a close relative by calling a talk show booking agent?)

But Jon and Kate Gosselin don't bother us because they're a bad couple who make questionable parenting decisions. People like that are everywhere. That's the reason these two got their own show in the first place. Back when Kate bossed Jon around openly and only the stray stay-at-home mom marveled privately over what a control freak she was, it was possible to pretend that cameras crews weren't involved, that we, the viewers, just happened to be in the room when Kate put three little toddler heads in ponytails and yelled for Jon to get the boys dressed, pronto.

What bothers us is that our attention played a part in their becoming worse and worse parents and a less and less viable couple. Their marriage may have been doomed from the start -- Jon was only 22 when they got married, and having eight kids overnight would put a major strain on the best pairs --but the book tours and the fawning fan girls who want to soothe poor, misunderstood Jon couldn't have helped.

The charm of "Jon & Kate Plus 8" lay in its obscurity. Once these two became wildly popular, we didn't want to see them on TV anymore. When being in front of the camera became their job, they stopped being all that interesting in front of the camera. Instead of getting a privileged glimpse of their lives behind closed doors, all we were viewing was just another day at the office.

Now Kate prattles on in that overconfident actress tone we can't trust. Jon still doesn't know how to use his words, but feels more justified than ever to sulk and shrug and mumble as the camera crew falls asleep on its feet. Worst of all, the two oldest girls already sound like tiny talk show hosts, thanks to the fact that there are cameras trained at their faces and people asking them what they think around the clock.

Or maybe all little girls sound like tiny talk show hosts. It's so hard to tell the difference. When appearances are everything, everything becomes nothing.

No one seems more confused than Jon and Kate themselves. When asked what worries her the most about the divorce, Kate answers, "The label, that we've failed." Terrified of being judged badly, but unable to remove herself from the camera's eye: hell in the time of reality TV.