The president has condemned the government and said the U.S. "stands with" protesters. What more does the GOP want? 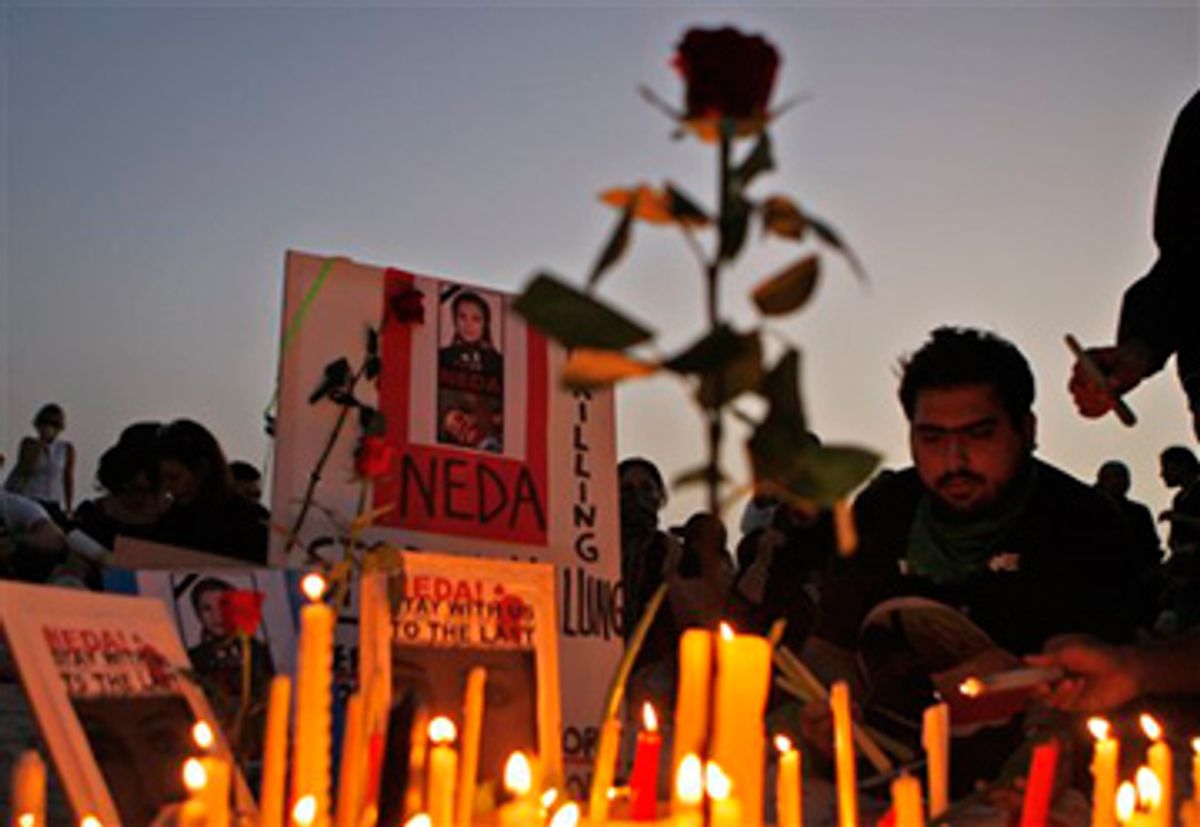 Iranians light candles in front the image of Neda Agha Soltani, who was reportedly killed when hit by a bullet during a protest in Tehran two days ago, in Dubai, United Arab Emirates, Monday, June 22, 2009. Hundreds of supporters of reformist presidential candidate Mir Hossein Mousavi attended a silent rally today.
-- Iranians in Dubai, United Arab Emirates, light candles in front of the image of Neda Agha Soltani, who was reportedly shot to death during a protest in Tehran Saturday.

I haven't been able to shake the image of the Iranian martyr, 26-year-old Neda Agha-Soltan, dying, live, on a cellphone video in Tehran on Saturday. The way her eyes follow the camera -- follow us, the global bystanders, seeming to demand that we do something -- has haunted me ever since.

I'm not the only one: Neda is a hero worldwide, a top search term on Google, a trending topic on Twitter. I mostly agree with Kate Harding that over-identifying with Neda is silly -- we are not Neda, and mourning her isn't exactly bringing down the Iranian government -- but she's catalyzing a crucial global reaction nonetheless. Even the late news that Neda herself wasn't terribly political, just a philosophy student who loved to sing, doesn't blunt her impact. Women are banned from public singing in Iran.

Paradoxically, I want the world to stand up for Neda -- and stand with all the other Iranians, especially the Iranian women, fighting and dying for freedom this week. But I think President Obama has had nearly perfect pitch in his statements on the struggle there. Now he's holding a Tuesday press conference that most people believe will feature some new statement on Iran. We can only hope he will recast his already strong statements condemning the Iranian government's "unfair and violent" crackdown and pledging to "stand with" the Iranian protesters. Amid the din of braying Republicans, which has somehow become as big a story as the Iranian uprising itself, no one seems to be listening to Obama.

Instead, unbelievably, people seem to be listening to deranged neocons and Republican opportunists demanding Obama do more. Guys like William Kristol and Michael Ledeen, who are wrong about everything. Paul Wolfowitz, who with Kristol and Ledeen sold us the Iraq quagmire, compares Iran to the Philippines, and says we should do what we did to Ferdinand Marcos and tell him it's time to go. Is Wolfowitz really so blinkered that he doesn't remember Marcos was our ally? How do we make Mahmoud Ahmadinejad or Ayatollah Ali Khameini step down?

Congressional Republicans, though, have been the worst. Neocon grifters are paid well by think tanks and the Washington Post to be wrong; Congress members, who have to face election, should be a little bit smarter and more honest. Sen. John McCain in particular should be ashamed of himself; he really knows better. The callow Eric Cantor may in fact not know better; he's a camera hog and an opportunist. The Republicans calling Obama "weak" and "passive" have no formula for an effective U.S. reply to the protests. We have no diplomatic relationship with Iran, so we can't call home our ambassador and staff there. On "Hardball" today, GOP Rep. Mike Coffman said Obama should be demanding a "recount," as though Iran's Guardian Council would listen. Even the recount the council completed, which showed that in 50 cities there were irregularities -- more people voted than live there -- only led the Council to reaffirm the election's validity.

In Congress, Sen. Richard Lugar has been the lone informed GOP voice backing the president; we can only hope others listen. And really listen, because Obama's been saying more than he's getting credit for. In Friday night's conversation with CBS's Harry Smith, these two paragraphs didn't make it onto the broadcast -- but the White House posted the full exchange on its blog. It's a strong defense of the protesters claiming their civil rights and condemnation of state violence:

What you're seeing in Iran are hundreds of thousands of people who believe their voices were not heard and who are peacefully protesting and -- and seeking justice. And the world is watching. And we stand behind those who are seeking justice in a peaceful way. And, you know, already we've seen violence out there. I think I've said this throughout the week. I want to repeat it that we stand with those who would look to peaceful resolution of conflict, and we believe that the voices of people have to be heard, that that's a universal value that the American people stand for and this administration stands for.

And I'm very concerned based on some of the tenor and tone of the statements that have been made that the government of Iran recognize that the world is watching. And how they approach and deal with people who are, through peaceful means, trying to be heard will, I think, send a pretty clear signal to the international community about what Iran is -- and is not.

When that statement got ignored, the White House released this one on Saturday:

The Iranian government must understand that the world is watching. We mourn each and every innocent life that is lost. We call on the Iranian government to stop all violent and unjust actions against its own people. The universal rights to assembly and free speech must be respected, and the United States stands with all who seek to exercise those rights.

What more is Obama expected to say? We'll find out Tuesday. Robert Gibbs gave a hint in Monday's briefing. "I think he has been moved by what we've seen on television," Gibbs said, adding that the president was particularly affected by images of women braving the crackdown "to speak out and be heard."

So expect to hear that Obama was moved, especially by the women of Iran and their bravery. I'm sure some reporter will ask Obama if he watched Neda die, and his answer will be interesting, and likely both moving and circumspect. I think Obama has said all he needs to say on this issue, and he's right about the bigger stake: The U.S. can't be seen as meddling. The Iranian story is still unfolding. Stay the course, Mr. President, stay the course.