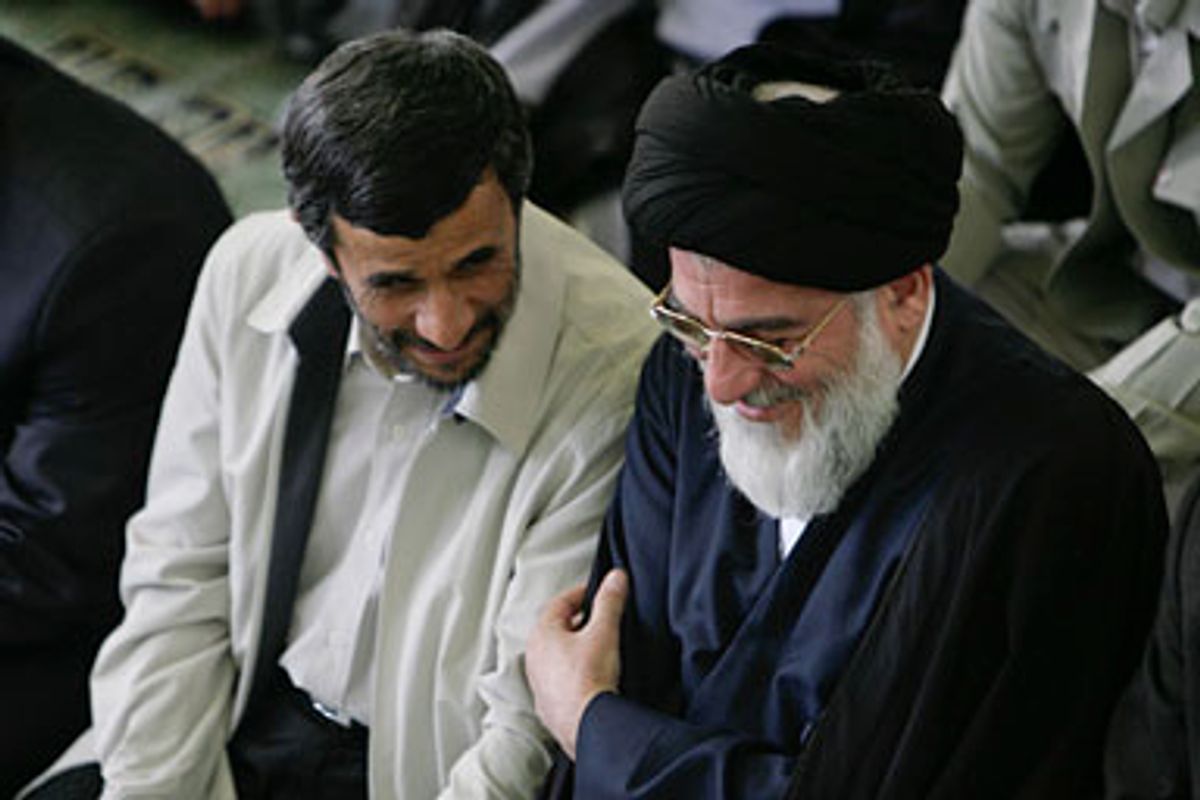 In the summer of 1968, as Soviet tanks rolled into communist Czechoslovakia to end the brief period of liberalization known as the "Prague Spring," W.H. Auden composed a poem titled "August 1968":

The Ogre does what ogres can,
Deeds quite impossible for Man,
But one prize is beyond his reach,
The Ogre cannot master Speech:
About a subjugated plain,
Among its desperate and slain,
The Ogre stalks with hands on hips,
While drivel gushes from his lips.

Secular government is the basis of both liberty and democracy. It is important to emphasize this, because of the tendency to portray the struggle in Iran in terms of a global conflict between democracy and dictatorship. Set aside, for a moment, the fact that former Prime Minister Mir Hossein Mousavi was one of four candidates, including President Mahmoud Ahmadinejad, who were approved to run as presidential candidates last May by the clerics of Iran's Guardian Council. It does not take away from the heroism of Mousavi or his followers to point out that if Ahmadinejad stole the election he stole an election that was already rigged.

The larger issue is the question of what comes first: separation of church and state, or democracy. America's Founders had no doubts on that score. Democracy requires citizens who are free from "superstition" and "priestcraft," to use 18th-century language. Americans have usually believed that religion can play a constructive role in a democratic republic by encouraging moral behavior. But in the traditional American view, theocratic democracy is nothing more than majoritarian tyranny, whether the clerics have a formal role in the state or merely tell the voters how to vote. And even secular democracy is not a goal in itself. It is merely a means to an end: the protection of natural rights.

The idea of universal, basic natural human rights is incompatible with theocracy in any form. While Christians and adherents of other religions can believe in natural rights, the theory of natural rights itself, influenced by ancient Greek sophists and Epicureans, is inherently secular. Natural rights by definition are those that ordinary people, using only their reason, can agree upon -- things like life and liberty and property or happiness, meaning access to subsistence. The list of natural rights varies from thinker to thinker, but they all have one thing in common -- they are not revealed by a divine intelligence to a prophet or priests.

Combine the two ideas of natural rights -- the governed as the bosses of the governors, the rights of the governed identifiable by reason -- and you get a conception of government as something that is limited in its purposes, if not necessarily its means. In the words of Thomas Jefferson in his "Notes on Virginia": "The legitimate powers of government extend to such acts as are injurious to others. But it does me no injury for my neighbor to say there are 20 gods, or no god. It neither picks my pocket nor breaks my leg."

A government, in short, is a limited-purpose, secular, worldly agency, not a divine institution. It is more like a property-owners association than like a church. There would be no point in a property-owners association that sought to do its limited, straightforward business according to the precepts of Catholic natural law, or Baptist theology, or Orthodox Judaism. Likewise, from the natural rights liberal perspective the very idea of a Christian state or an Islamic republic seems absurd, like a Buddhist municipal water utility district.

But what if 100 percent of the people in a water-utility district are Buddhist and want the district's charter to promote Buddhism? It doesn't matter what they want. Promoting Buddhism is beyond the legitimate scope of the activities of a water utility district. Buddhist monks are free to promote Buddhism privately, but the water-utility engineers should stick to keeping the water clean and safe for everyone, Buddhist and non-Buddhist alike.

Replacing a Muslim monarch like the shah of Iran with an "Islamic republic" is merely replacing a more autocratic with a more populist form of theocratic tyranny. Liberal democracy is sometimes defined as "majority rule with minority rights," but that is misleading. If a religious majority rules, not on the basis of secular reason, using arguments that can convince nonbelievers as well as believers, but on the basis of supernatural dogma, then you simply have a form of religious tyranny with a multitude of small religious tyrants.

"SECTION III. And though we well know that this Assembly, elected by the people for the ordinary purposes of legislation only, have no power to restrain the acts of succeeding Assemblies, constituted with powers equal to our own, and that therefore to declare this act irrevocable would be of no effect in law; yet we are free to declare, and do declare, that the rights hereby asserted are of the natural rights of mankind, and that if any act shall be hereafter passed to repeal the present or to narrow its operation, such act will be an infringement of natural right."

Secular government, even in a country with a religious majority, is therefore the indispensable basis of genuine democracy, if the purpose of democracy is to allow a group of people to achieve their common, limited, this-worldly goals while securing their natural rights. To be sure, this understanding of democracy as subordinate to natural rights is disputed by many thinkers in the West and the world. Often democracy and self-determination are treated as though they were ends in themselves, rather than as means to realize the basic natural rights of individuals.

But if you sever democracy from the idea of universal, human rights discernible by secular reason, with no need for assistance from divine revelation, you run the risk of sanctioning majoritarian tyranny by means of free and fair elections. You then have no grounds for objecting, if reactionary Christians in a Christian majority country vote in biblical law, or if a majority of Muslim voters vote in sharia law. Majority rule did not justify racism in the American South. It cannot justify "religionism" anywhere.

Is it "cultural imperialism" to insist that natural rights be the basis of limited and secular government? That cultural-relativist argument can hardly be made by theocrats, who claim that the legitimacy of governments depends on their conformity to the will of God, as interpreted by their scriptures and their clerics. Pakistan's Ministry of Religious Affairs takes its motto from a Quranic verse: "Islam is the only religion acceptable to God." Those who hold this view cannot argue that their version of government is the only divinely sanctioned one and then defend it by claiming to be defending their local traditions and customs, as though their would-be universal religion were just a local style of costume or cuisine. Religious tyranny today predominantly is found in Muslim countries like Saudi Arabia and Iran. But that does not make critics of religious tyranny "anti-Muslim," any more than the fact that white supremacy was found, obviously, in white nations and white-ruled empires made criticism of racism "anti-white."

If I am right, then enlightened people around the world should oppose official religion just as they opposed racial apartheid. In the aftermath of European colonialism, cultural relativists have mocked distinctions between "civilization" and "barbarism." But if it was barbarous for South Africa to be a Nazi-like white supremacist state, why is it not barbarous for Saudi Arabia to ban the public practice of other religions by its citizens? If constitutions declaring Iran, Iraq and Afghanistan to be "Islamic republics" are not relics of a more primitive stage of human civilization, then what is? Fear of hurting the feelings of Muslim theocrats should not deter our disapproval any more than fear of insulting Afrikaaners did during the campaign against South African apartheid.

None of this means that the U.S. government or other governments should try to reform religious tyrannies, including "democratic" Islamic republics, from the outside. In the aftermath of George W. Bush's crusade in the name of democracy, we do not need a foreign policy crusade in the name of secularism. President Obama's caution during the Iranian upheaval has been appropriately statesmanlike. Nor would it be wise to recommend ostracizing the inhabitants of clerical states. Treating white South Africans as pariahs helped to accelerate the demise of apartheid, but in the case of some of today's semi-liberal and semi-democratic Islamic republics, engagement of their populations and leaders with the wider world may have better effects.

The one thing that we in liberal countries can do, while reformers in Iran fight and sometimes die for their principles, is to understand our own. And the most fundamental principle of all is that ordinary human beings are capable of governing themselves without the guidance of other ordinary human beings who pretend to speak on behalf of God.