"Transformers: Revenge of the Fallen" 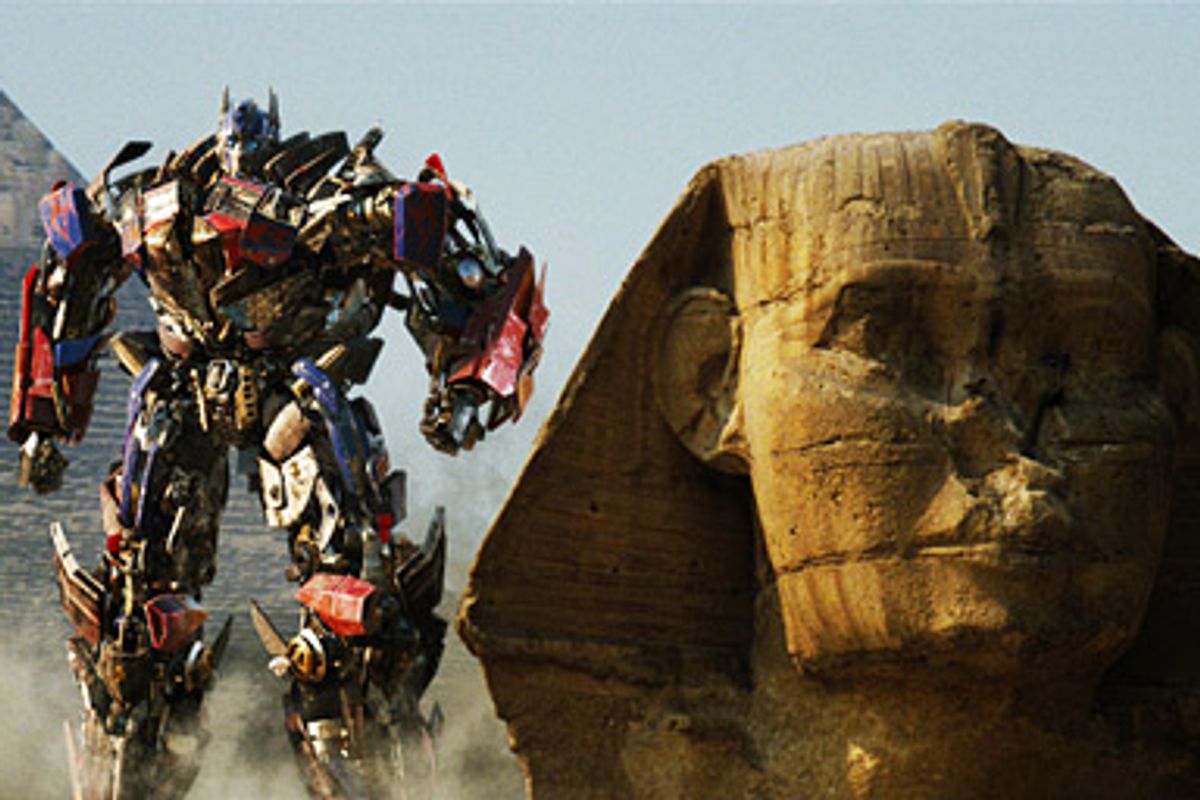 "He's here -- I smell him." That's a line from "Transformers: Revenge of the Fallen," but funnily enough, it's also what I think every time I sit down to watch a Michael Bay movie. As you can probably guess from the title, "Transformers: Revenge of the Fallen" is the sequel to Bay's hugely successful 2007 "Transformers," and it's roughly more of the same -- and yet less. "Revenge of the Fallen" picks up two years after Sam Witwicky (the perpetually clueless-looking Shia LaBeouf) and the Autobots have saved the human race from the Decepticons. Don't clutter your head with worrying about exactly what this means: Bay and his screenwriters, Ehren Kruger and Roberto Orci, sure didn't. All you need to know is that the Autobots are good and the Decepticons are bad; both are humanoid robots that can fold themselves up into various vehicles and other mechanical objects. (This is a movie franchise based on a toy, after all -- a credit line at the beginning tells us it's being presented in association with Hasbro.)

Now the Decepticons are back to stir up trouble -- their aim is to destroy the sun; why not? -- and Sam, who's just headed off to college, must temporarily put his education on hold. Meanwhile, his girlfriend, Mikaela (Megan Fox), prances about in teeny-tiny shorts and other assorted form-fitting garments. She makes her entrance crouched on the seat of a motorcycle, her pert butt aimed at the heavens. Later in the movie, a once-aggressive robot she's befriended and tamed eagerly humps her leg. This is what it means, in the Bay universe, to be a movie sex symbol.

In "Revenge of the Fallen," the action jumps from Los Angeles to New York and other points on the East Coast, as well as to France and Egypt. We must, of course, end up somewhere in the desert so Bay will have a chance to give us lots of scenes in which soldiers (they're part of a top-secret outfit called NEST, who work with the Autobots to keep Earth safe, and they're led by stalwart Capt. Lennox, once again played by Josh Duhamel) get to shoot the bejesus out of the enemy among the dunes. The plot of "Revenge of the Fallen" is extremely busy without being particularly rewarding: There's something happening every minute, including lots of clumpy robot battles in which it's impossible to tell who's coming from where. Bay seems to think that just showing us a bunch of brightly clashing metallic limbs (accompanied by lots of noise) is enough to make us faint in our seats with excitement.

Of course, all Michael Bay movies are loud: He accessorizes his shoddily conceived and executed action sequences with heaps of gunfire, explosions and crashes, ostensibly to make them more thrilling. But if "Transformers" was loud, "Revenge of the Fallen" is louder. You could argue that in the first movie, Bay at least attempted to make us care about the human and robot characters, particularly Bumblebee (voiced by Mark Ryan), the sensitive robot/car who becomes Sam's guardian; here, they're an afterthought, a shadowy sidecar to the action. "Revenge of the Fallen" is also exceedingly crass. I don't believe it's the job of movies to safeguard the purity of our youth. At the same time, I'm not sure I see the point of robots using words like "bitch" and "pussy" in a movie inspired by a line of toys. "Revenge of the Fallen" just comes off as a bratty kid showing how many swear words he knows.

Bay is a purveyor of clunky, occasionally enjoyable crap: I sometimes get pleasure out of his movies by marveling at the astonishingly low level of craftsmanship that he consistently gets away with. (My favorite is "The Island," a fine example of futuristic claptrap.) And maybe "Revenge of the Fallen" is no worse than any other Bay movie: You probably can't sink much lower after making a piece of pseudo-historical hokum like "Pearl Harbor." Still, big, dumb and clumsy is no way to go through life. "Transformers: Revenge of the Fallen" is shiny and loud, all right. But do you really want it humping your leg?