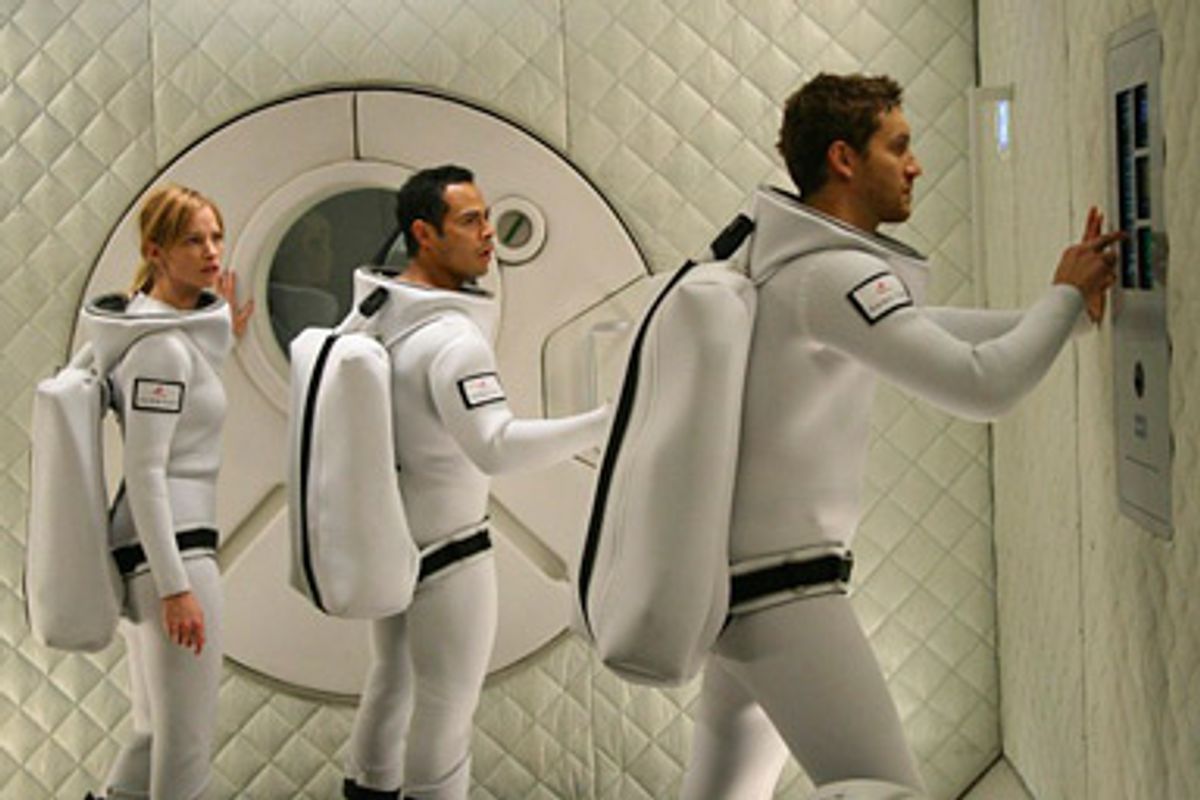 Context matters. A really great sitcom can make a horrible play. A fantastic play can make a terrible movie. An excellent movie can make an awful TV miniseries.

Fox's "Virtuality" (8 p.m. Friday, June 26) proves that a really good pilot for a TV series can make a truly awful TV movie. But don't be mistaken: This excursion into the far reaches of space, brought to you by "Battlestar Galactica" producers Ronald D. Moore and Michael Taylor, proves far more compelling than most made-for-TV movies – and most TV pilots, for that matter – up until its abrupt, hair-pullingly inconclusive ending.

"Virtuality" offers exactly the sort of story that "Galactica" fans will sink their teeth into. As Earth is ravaged by global warming and is rapidly becoming unlivable, a small crew aboard the starship Phaeton begins its 10-year mission to find a habitable planet orbiting a nearby star. Conditions on board the ship are beyond claustrophobic (how Galactican!) after just a few months: Couples bicker, young crew members second-guess themselves, personalities clash, a crew member falls ill, and the commander of the ship begins to lose control. To make matters worse (far worse, in fact), the entire crew is being filmed for a reality show, so they navigate the pressure cooker of ship life knowing that their worst (and most private) moments are being broadcast to viewers back home.

In order to offer a reprieve from the tireless strain of their mission, crew members are provided with virtual reality devices that allow them to star in their own fantasies. But when some mysterious malevolent force invades this one last respite from the confined drudgery of ship life, interpersonal relations on the Phaeton begin to deteriorate in earnest. We can feel it: Tensions are rising to the point that they're beginning to endanger everyone on board.

And then, just when things start to get really interesting, the so-called movie is over. Remember how some of the very best episodes of "Battlestar Galactica" ended with truly breathtaking cliffhangers? Well, "Virtuality" is just like that, only it's not a series, it's a stand-alone movie. Guess you’ll have to wait forever to find out what happens next!

But the fact that there are no real answers to the mysteries set up here is only the tip of the iceberg. We're presented with stories and characters that are quite clearly meant to be explored over the course of a season, which makes the whole thing feel, very palpably, like an utter waste of time. Essentially, "Virtuality" is a two-hour-long teaser, an extended trip to a really excellent strip bar that ends with a cold shower. Unless you're a masochist, the flash of credits will make your heart sink.

Of course, many die-hard "Galactica" fans will be interested in watching in order to advocate that the series get picked up by Fox. And it's true, as a pilot, "Virtuality" is fantastic. Why wasn't it picked up in the first place? Cool tricks, heavy drama, clever dialogue, twists and turns -- what more could you want from a space soap, anyway?

Maybe the real question is, why torture us with what might have been? Why air a two-hour pilot that only works as a pilot, with a cliffhanger ending that's sure to piss off more than a few casual viewers thinking they just tuned in for, well, for an actual movie, with an actual ending? Those who watch without realizing that "Virtuality" is a pilot (that was never conceived as anything but a pilot) will think that they've suffered through a TV movie with serious art film delusions of grandeur -- in a bad way.

But then, maybe Fox is airing "Virtuality" to motivate "Galactica" fans to do all the marketing work for them. When asked if Fox will pick up the show, Moore told IESB.net, "I think they want to see what the reaction is going to be … Right now, it doesn’t look like it’s going to series, but if enough people watched and got excited about it, anything is possible." Is this all just a savvy publicity scheme? Do Fox executives already love this series in secret, and they're just setting us up to believe that an outpouring of fan support forced them to add it to their schedule? Or has an increasingly manipulative world of viral marketing rendered us hopelessly paranoid?

Ultimately, airing "Virtuality" will either look like a smart publicity maneuver or a really bad programming choice, depending on how many viewers rally behind the cause. As usual, Fox will let the fans decide.