As an aging courtesan, Michelle Pfeiffer brings beauty to this Colette adaptation -- but can she bring heat? 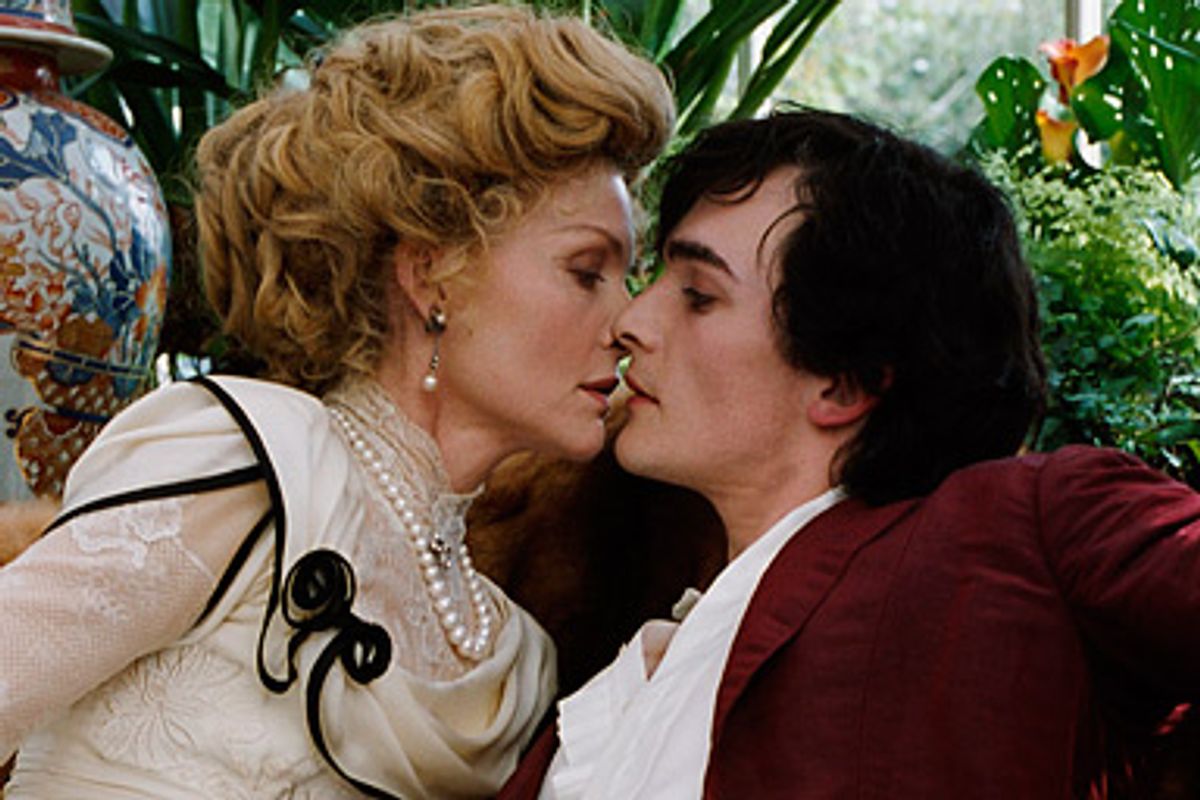 Even if the French and the English have traditionally maintained a grudging tolerance for one another, there's no reason an English filmmaker shouldn't attempt an adaptation of French source material -- particularly if that filmmaker is Stephen Frears, whose 1988 "Dangerous Liaisons" (based on Pierre Choderlos de Laclos' "Les Liaisons Dangereuses") achieved a perfectly acceptable level of Frenchness. In theory, Frears should have been able to repeat that magic with "Chéri," based on Colette's slim duo of novels "Chéri" and "The Last of Chéri," particularly considering that he'd be working once again with one of the earlier movie's stars, Michelle Pfeiffer.

But there's no way around it: Frears' "Chéri" is just too English. Pfeiffer stars as Léa de Lonval, an aging courtesan who takes up with a much younger lover, nicknamed Chéri (Rupert Friend), the son of one of her former rivals, Madame Peloux (played, with too much comic eye-rolling, by Kathy Bates). Léa doesn't intend to build a relationship with Chéri; she takes him on as a diversion, a fling. But after six years, she gets used to having him around, and she's dismayed when she learns that his mother has decided to marry him off to Edmee (Felicity Jones), the pretty young daughter of another one of their old-time colleagues, Marie-Laure (played by Iben Hjelje). Léa can't, of course, express that dismay openly: As a professional, she's built a reputation as a fabulous lover who's also cool about love. But the loss of Chéri forces her to reckon with her own loneliness -- and with the fact that she's getting older, if no less beautiful, by the day.

"Chéri" was clearly made with a great deal of meticulousness. Christopher Hampton, the go-to guy for classy adaptations, wrote the screenplay; cinematographer Darius Khondji has given the movie a satiny, candy-box look; Consolata Boyle gets the pre-1920s costumes just right, putting Pfeiffer in an assortment of drapey columnar dresses in macaroon colors; production designer Alan MacDonald has sought out all the proper art nouveau flourishes, including a Mucha-like dream bed for Léa.

But "Chéri" is a perfect example of a movie that gets many of the details right and the vibe all wrong. Despite the movie's lavish trappings (and the fact that it was filmed on location in France), "Chéri" is all efficiency and no luxury. It clicks along like clockwork when it needs to be languorous. And Hampton's adaptation fails to capture the sharp wit, and the creeping melancholy, of the source material. Frears himself narrates the story in voice-over, offering an introduction and a too-clipped conclusion, perhaps as a way of adjusting the movie's tone. But the whole enterprise is far too jolly and jaunty, and while Colette's writing may be many things, "jolly" and "jaunty" -- at least in the English sense -- it is not.

The casting may not have been perfect: Colette's Léa is a rosy, robust figure, and Pfeiffer is perhaps a bit too delicate. But that's not the chief problem. Pfeiffer is beautiful here, but she's also chilly and stiff. She's most believable when she lets us see the vulnerability, and the self-possessed coldness, in those perfect almond eyes. But her line delivery is static and stagy; she's all composure and no fire. Friend, as her young paramour, comes off a bit better: His high, sculpted cheekbones lend him an almost girlish beauty, and he's good at registering the nuances of bewilderment and joy that Lea brings out in him.

But on film, these two lovers don't have the spark, or the casual sensuality, that they need. At one point, Léa explains to Chéri that his eyes are beautiful because they're shaped like a sole, as opposed to a flounder. Sadly, these characters are trapped in a movie that can't make that distinction. Sole, flounder, who cares? The only thing that matters is that a fish be cooked all the way through, which is how you get a "Chéri" with all the Frenchness boiled out of it.