The studs of summer TV

Fallen heroes forge new lives, from the well-endowed has-been of "Hung" to the angsty star of "The Philanthropist" 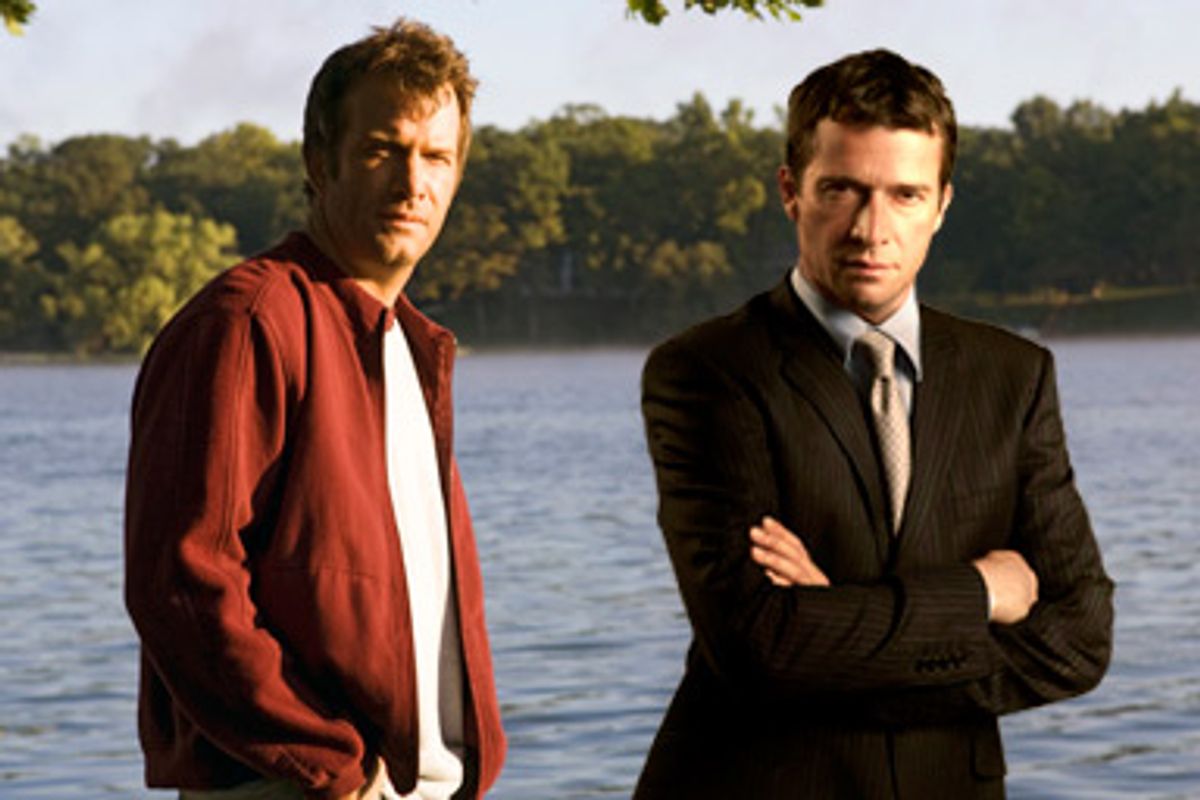 We don't need another hero. The fact is, we don't trust your run-of-the-mill hero anymore. We're suspicious of that fearless look in his eye. (Who isn't scared these days? Has he been drinking?) We're unnerved by that steely set to his jaw. (Is he smoking meth?) If a man rode in on a white horse and swept us off our feet, we'd probably sue him for the back trouble we suffered as a result of his valiant gesture.

Most of us don't want a beefy, confident hunk anyway. We don't want swagger and dimples and piercing eyes and gigantic meat Chiclets. We don't want guys who look like extras from "The 300." You can take your firm handshakes and your courage and your lifelong calling to save the day using your fists. We're no longer charmed by the smug romancer who never second-guesses himself. Bush Jr. killed any remaining interest we might've had in a James Bond or a Han Solo or a Crash Davis.

This is the age of Obama. Give us your lanky thinkers, your flawed do-gooders, your hunchy neurotics yearning to breathe free. What we long for these days is a man of ideas, a man of compassion leavened by pragmatism, a well-intentioned fly swatter. We'll happily swap smooth-talking bravery for the worried, thoughtful ramblings of an honest chickenshit.

This sea change in our view of manliness is what gives HBO's new dramedy "Hung" (premieres 10 p.m. Sunday, June 28) its oh-so-timely bite. At first glance, "Hung" looks like yet another terrible concept snatched up by the comedy department at HBO, which has a weakness for frat boy humor that most of us --  even former frat boys and those who once cavorted with them -- don't find all that amusing.

Drecker, like Diggler, is the product of a bygone era. Remember how, when the '70s gave way to the '80s in "Boogie Nights," everything went sour? You can almost see how Drecker's wild and woolly '80s and '90s as a confident high school athlete and tanned, happy newlywed gave way to his no-good, very bad new millennium: He got a low-paying job as a high school basketball coach and teacher and his beauty pageant wife, Jessica (Ann Heche), left him for a nebbishy but loaded dermatologist. His two kids (both a little awkward and plain-looking and chubby for the offspring of a star athlete and a beauty queen) move back in with their mom when an accidental fire and unexpected financial woes leave Drecker sleeping in a tent in his own backyard. He has no money, his house needs major repairs and is mortgaged to the hilt, his kids are gone, and his jerk neighbor, who lives in a brand-new, towering nightmare of a mansion, keeps urging him to sell.

"I used to be a big deal, I used to be going somewhere. Now all I ever seem to do is try not to drown. When did life become something you buy?" This is Drecker's thoroughly modern lament, a lament echoed across the country over the past year as we watched our things get dragged away by the banks, which got dragged away in turn. Middle-aged, simple-minded, vaguely honorable but utterly unself-aware, Drecker feels like a dinosaur who's overstayed his welcome. As a living, breathing metaphor for a once overly indulgent, now regretful nation, Drecker is a deeply sympathetic character. Whether he's standing under a burned-out roof he can't afford to repair or shivering in his little tent, Drecker is as forlorn and overwhelmed as most of us feel.

But like most old-fashioned heroes, Drecker is also a romantic. The first thing he tells us, in a voice-over, is that his parents taught him "to take responsibility and get the job done, no excuses. You do your best with whatever gifts God gave you." Drecker stubbornly refuses to sell his parents' home so the creep next door can bulldoze it and put in an Olympic-size pool. He has to find a better way to live in this crazy, confusing, mixed-up modern world!

The answer, of course, is in his pants. But for a show with a premise this crass, "Hung" is all quiet moments and nuanced humor. Drecker never says, "My kids are fat losers!" or "My ex's new husband isn't nearly as handsome as me!" Of course, if "Hung" were produced in the '80s or '90s, the kids would be gorgeous but outwardly bratty, the ex-wife would be a vain, unflappable beauty, and the new husband would be a rich stud. Instead, what we see is a picture that's just cartoonish enough to be funny, but just thoughtful enough not to feel like a cartoon. Drecker's kids are a realistic combination of lovable and pathetic, his ex is a nice mix of self-involved and misguided. Even his dermatologist nemesis is reasonably nice, if something of a chump. Drecker himself isn't a complete idiot, he's just not that smart. Somehow, the gray areas and idiosyncratic details are what make this show work.

Of course, this crooked picture wouldn't be complete if Drecker, a former hero and current loser, didn't get help from Tanya (Jane Adams), a former loser who slowly but surely becomes Drecker's hero -- or his pimp, at least. As scrappy-looking as Drecker is traditionally handsome, Tanya is smart and hardworking but hasn't lived up to her potential, thanks to a bad habit of settling for less than she deserves. Tanya could seem plain and pathetic, but Jane Adams lends her an endearing lack of self-consciousness. She's solemn and wide-eyed one minute and giddily enthusiastic the next, prone to doing geeky little dances whenever Ray agrees to submit to some fresh humiliation in pursuit of filthy lucre. Tanya believes in Ray, but more important, she knows what women want. She's certain that she can transform Ray's gifts -- or, um, gift -- into a profitable brand.

Ultimately, like Drecker and the manly heroes who swaggered along before him, "Hung's" success will depend on its writers' courage to create exciting stories about a man-whore week after week. The first four episodes were satisfying, but can they get it up again -- or, rather, keep it up? If they have enough passion and stamina, the future looks bright for this lovable but peculiar, fly swatter of a dramedy.

Back on mainstream television, NBC has its own, eight-part version of "Hung" coming out this summer: "The Philanthropist" (10 p.m. Wednesdays). Like Ray Drecker, Teddy Rist (James Purefoy) is a born hero. He's good-looking, dimpled, suave and incredibly rich. He would be on top of the world right now, but his young son died and his marriage fell apart. See how it works? On premium cable channels, our tragic heroes stumble and fall because they're egotistical or sullen or lazy; on mainstream network channels, they fall because their kid dies. (See also: "The Mentalist" and 50 million other shows.) It's not his fault, get it?

In fact, nothing is Teddy's fault. He's handsome and clever and one hell of a guy, too -- deeply, abidingly righteous and honorable and caring. The very powerful loss he's suffered has led him to do what any heroic man would do, namely, to seek out the downtrodden of the world and help them in whatever ways he can -- preferably in ways that involve bamboozling corrupt militia leaders or riding through the hinterlands of third-world countries on scrappy little mopeds while rebels shoot at him from the trees. If "Entourage" is frat boy humor, then "The Philanthropist" is frat boy drama: The studly, flawless good guy saves an adorable foreign child with eyes straight out of a Keane painting, and then beds a steady lineup of sexy bartenders, sexy charity workers and sexy wives-of-best-friends.

OK, fine, Teddy does have one flaw. He just can't say no to the bastions of hot women who want him bad. He slept with his best friend's wife (Neve Campbell), but just look at the way she squints at him! (That squint means that Neve Campbell is acting.) But can you really blame him, guys? He's hot and he's a billionaire, after all. Again, this show is aimed at frat yuppies who long to make a difference in the world (or at least pretend like they do) by doing more than just signing checks. They don't want to just donate to Katrina victims online, they want to rent the 18-wheeler full of bottled spring water, personally drive it down to New Orleans, and hand icy cold bottles to the various thirsty brown people in the street. It's the modern macho fantasy for guilty honkies.

"I'm so not the heroic type," Teddy assures us, while acting heroically. This is the sound the guilty honky is supposed to make, of course, lest we think that any of his charitable urges (which clearly well up from the purity of his heart) are merely ego-driven. And look, there's nothing wrong with guilt (or ego for that matter), if it motivates you to lend a helping hand instead of buying a third or fourth vacation home.

But somehow this routine might play a little better if Teddy had real flaws beyond, "Oh, he's sometimes almost a little brusque with underlings!" and "Look, he gave in and slept with the chick from 'Wild Things.'" Like I said before, self-sacrificing, hopelessly hot masters of the universe just don't do it for us anymore. This is the age of the lean, mincing girly man, the insecure overthinker. We'll trade in a macho swashbuckler for a pensive mouth-breather any day of the week.

So even though "The Philanthropist" might've seemed like an incredibly modern, high-concept drama a few years ago -- "Dirty, Sexy Money" meets James Bond meets "Oprah's Big Give" with a little Brangelina thrown in for good measure -- today it feels about as compelling as an early '90s Gillette commercial ("The Best a Man Can Get!"). That doesn't mean it's not worth watching, of course: The story is dynamic and well-written and the on-location shoots in Africa are beautiful (between this, NBC's "Kings" and Fox's "Virtuality," it seems clear that the networks feel compelled to burn off their most expensive ventures during the summer, to soothe their own guilt at overspending). And James Purefoy, whom you'll remember as Marc Antony in HBO's "Rome," truly is charming and delightful and convincingly humble/dashing/heroic. Just give him some sweaty palms and an agoraphobic streak, and then we'll talk.

Because the world refuses to be saved again by a rich white man with perfect teeth and manicured hands. Far from reassuring, Superman only stirs up our suspicions: Why is he so confident? Is he a sociopath? What is he getting out of this? The rest of us -- the lumpy ruminators, the hesitant obsessives, the disheveled stick-in-the-muds -- are determined to work it out for ourselves this time.

Hbo Hung I Like To Watch Sex Work Television