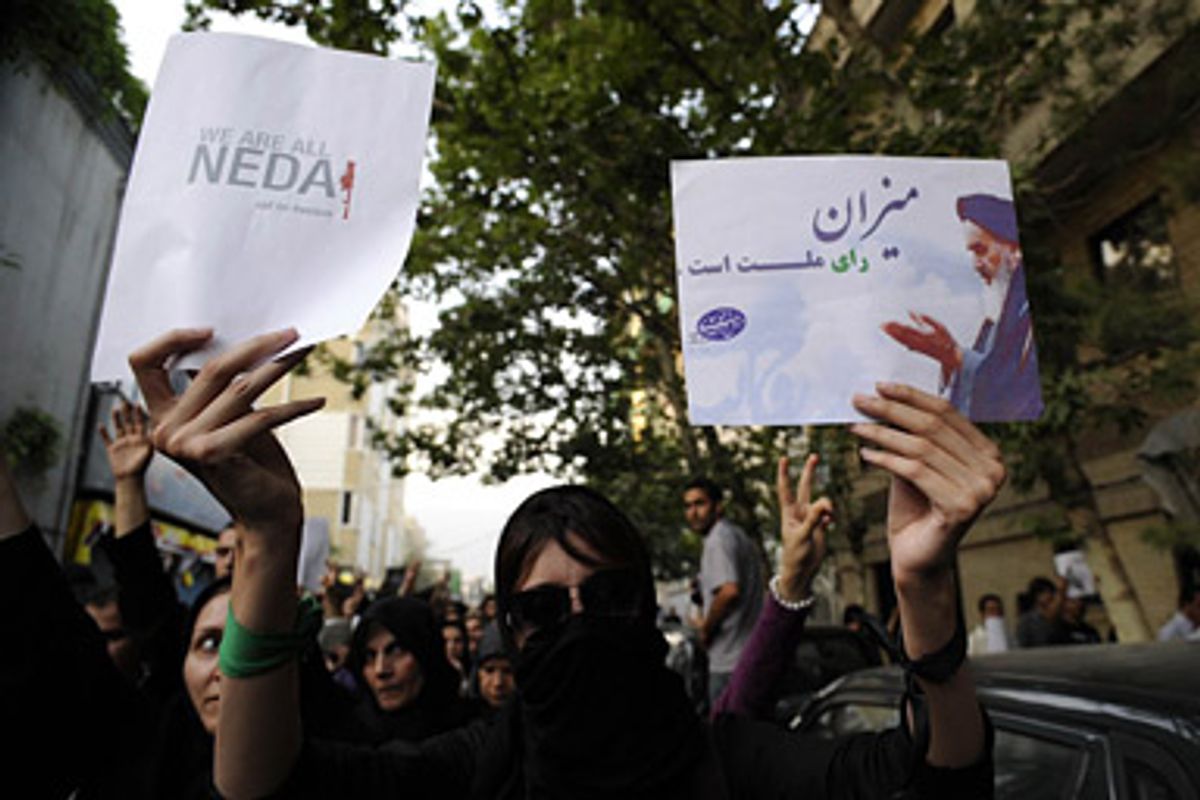 In this citizen photograph taken Sunday, June 28, 2009, a supporter of pro-reform leader Mir Hossein Mousavi, holds paper signs in Persian, reading " measure is people's vote", during a gathering at Ghoba Mosque in Tehran, Iran. Several thousand protesters who had gathered near north Tehran's Ghoba Mosque clashed with riot police in Tehran on Sunday in the country's first major post-election unrest in four days.
--

The phase of mass protest in the aftermath of the controversial election results of June 12 has drawn to a close for the moment. Movement activists can no longer put tens of thousands of protesters in the street because the security forces are too well organized and too loyal to President Mahmoud Ahmadinejad to allow it. Opposition leader Mir Hossein Moussavi has been increasingly indecisive on tactics even if he has been steadfast in demanding a rematch with incumbent  Ahmadinejad.

The AP reports that the march for Moussavi on Shariati Street Sunday by some 3,000 activists was violently repressed by the security forces, despite its having been a legal procession in part commemorating the killing in 1981 of revolutionary founding father Mohammad Beheshti (see below). Police used tear gas and clubs to disperse the marchers, attacking them and in some cases breaking bones. The demonstrators had been chanting "where's my vote?" and some were wearing green, the symbolic color of the Moussavi movement. They also by their chants tied Moussavi to Imam Hosain, the grandson of the Prophet Muhammad, who was killed by the repressive Umayyad government in 680 CE. The implication is that Supreme Leader Ali Khamenei is the equivalent of the Umayyad Caliph Yazid, who is despised by Shiite Muslims as the author of the martyrdom of Imam Hosain.

Opposition leader Mehdi Karroubi himself had joined in the march on Sunday.

Reuters reports that late Sunday some of the embassy personnel were released.

In a bad sign for Moussavi, his ally former President Akbar Hashimi Rafsanjani appeared to desert him on Sunday. The USG Open Source Center translates from official Iranian radio:

Vision of the Islamic Republic of Iran Network 1

Tehran Vision of the Islamic Republic of Iran Network 1 in Persian at 1630 GMT on 28 June broadcast its scheduled newscast, which included an item on remarks by Ayatollah Hashemi-Rafsanjani, Chairman of the Expediency Council, in a meeting the families of the "martyrs" of the 7 Tir incident, that is 28 June 1981, when the head of Judiciary and some other officials were killed in a bomb blast.

Rafsanjani said: "We should all make a step with cooperation and solidarity to remove the obstacles and solve the problems." He also said: "We should always end the election results with solidarity. If every election would result in discord -- we have an election once a year -- and there would be hatred and fighting, then there will be nothing left" ...

(Description of Source: Tehran Vision of the Islamic Republic of Iran Network 1 in Persian -- state-run television)

Rafsanjani has clearly decided to defer to Supreme Leader Ali Khamenei on handling the outcome of the elections, and has come out as critical of the crowd politics and occasional turbulence they produced. As a multibillionaire and man of the establishment, he may well have been frightened that the massive street rallies for Moussavi a week ago signaled a danger to the status quo, which he is attempting to preserve. From Rafsanjani's point of view, Khamenei, Ahmadinejad and others have been making a slow-motion coup, reducing the significance and openness of the system by excluding the reformists from running for office. Wanting to go back to 1997 is not the same as wanting a revolution.

On the other hand, Grand Ayatollah Bayyat Zanjani issued a statement defending the right of the protesters to rally peacefully and condemning the violent crackdown on them. There are nearly 30 grand ayatollahs in the Shiite world, the majority of them resident in the holy city of Qom in Iran. Despite their lack of political power, they could be influential in determining how the public remembers the election and what aspirations Iranians have for the future.

The real victors of a successful squelching of the protest movement would be the Revolutionary Guards, who have been making a hard-line slow-motion coup for some time.

Dilip Hiro explains the background of the current events and concludes that Iran's regime has moved in an authoritarian direction, raising questions about whether a fundamentalist Muslim movement is compatible with democracy.

Middle East Report has a substantial overview of the Iran crisis and its historical roots.