Johnny Depp may be the sexiest gangster ever in Michael Mann's stylish, brutal heist movie 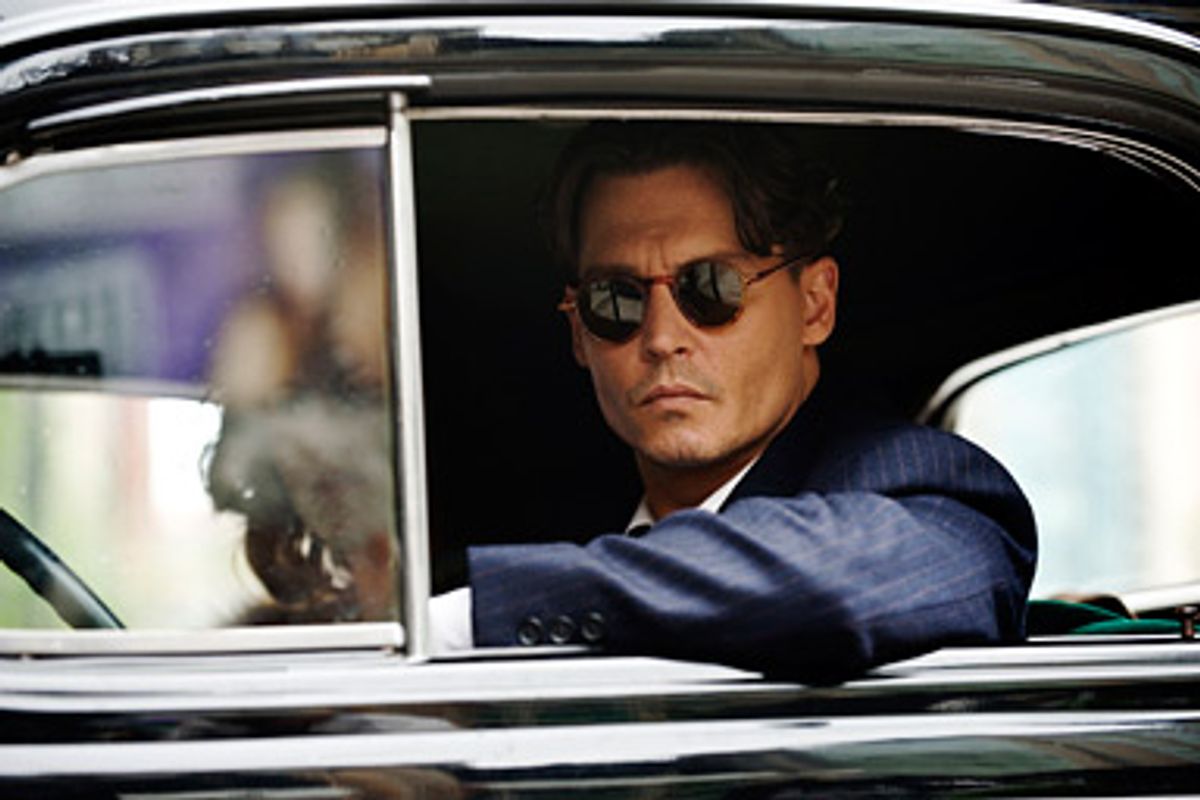 Michael Mann is a highly imperfect director, a filmmaker who's sometimes lauded as great when perhaps he's really only a smart storyteller with good visual instincts. Then again, in an age when an expensive, miserable mess like the recent "Transformers: Revenge of the Fallen" is viewed by Hollywood as movie gold because of its box-office performance, maybe that's enough. At the very least, Mann's movies always feel as if they were made by a human being, and if he's sometimes guilty of allowing flashy filmmaking style to overwhelm his subject -- as in the case of the uneven but intriguing "Ali" -- at least his movies always suggest a guiding visual and narrative sensibility. He's driven by a desire to make stuff look cool, sometimes at the expense of characterization, but he at least understands that his desire isn't the star of the show. You can't wish coolness into being; it simply has to happen, as the result of small choices as well as big ones.

Coolness happens, if just barely, in Mann's "Public Enemies," which tells the story of how Depression-era celebrity bank robber John Dillinger (Johnny Depp) repeatedly and gleefully escaped the clutches of stalwart FBI agent Melvin Purvis (Christian Bale) for some 13 months, until the inevitable end, outside Chicago's Biograph Theater in 1934. "Public Enemies" is a folk song rendered in visual shards instead of notes, hopscotching through parts of the Midwest as it follows Dillinger's numerous bank robberies and evasions.

Over and over again, he slips through the clutches of the awestruck Purvis, leaving the venerable G-man stroking his extra-square jaw, which further stokes the rage and determination of FBI chief J. Edgar Hoover (played, with stylized hamminess, by Billy Crudup). Strict narrative clarity isn't the picture's strong suit: Time and again Mann -- who co-wrote the script, along with Ronan Bennett and Ann Biderman, based on a book by Bryan Burrough -- fails to introduce characters properly, allowing figures like Stephen Dorff's Homer Van Meter, an associate of Dillinger's, to drift on-screen so unceremoniously that we're not always sure exactly who they are and what they're doing there. Mann orchestrates several murky chases through wooded areas, in which it's difficult to tell who's in pursuit of whom. There's a massive cast of guys in fedoras in "Public Enemies," and while it's easy enough to tell the good guys from the bad (the good guys are the stiff, boring ones), Mann doesn't bother to make much of a distinction between the members of Dillinger's various gangs, among them Alvin Karpis (Giovanni Ribisi) and Baby Face Nelson (Steven Graham).

But what the picture lacks in clarity it makes up for in visual vitality. Words aren't the strong suit of "Public Enemies"; instead, Mann lays out his vocabulary in the tilt of a fedora, or the easygoing manner in which Dillinger tucks a machine gun under his arm, or the way Marion Cotillard, as Dillinger's lady love Billie Frechette, lounges in a bathtub, extending a glorious naked leg to caress its rim with her foot. The glamour quotient in "Public Enemies" is high, and in a landscape of contemporary movies in which "sophistication" is seemingly a dirty word, it's a relief to see actors in period dress rather than outlandish Willy Wonka get-ups and superhero costumes.

Even the movie's violence has a grown-up gloss: Mann doesn't necessarily glorify Dillinger's violence, but he is attuned to all the ways in which, in the movies, cruel acts can also have a brutal elegance. When Dillinger and his cohorts storm into any of the various banks they rob during their big spree, Mann and Dante Spinotti (who frequently works with Mann) shoot these glorious, fragile institutions with a suitable degree of respect: With their polished oak railings and delicately veined marble pillars, they're like temples under assault. Concordantly, when Dillinger and his gang storm in, with their trim but supple overcoats and sharply creased hats, they're dressed for a day of business -- they show at least a modicum of respect for the physical institutions they're robbing, even if they have nothing but derision for the government that allowed such places to fail during the Depression.

I'm sure plenty of people will want to make the case that "Public Enemies" is exceedingly relevant in our own economically troubled era, but I don't think it is: Dillinger was a charming figure who courted the press and spoke directly, even flirtatiously, to his public. As criminals go, he was a dashing one, a movie-star-caliber figure for a time when we still had movie stars. It's hard to imagine a contemporary real-life equivalent, and I think even Mann knows that Dillinger was purely a product of his own day. And Mann isn't pretending to give us stark history here; he's in thrall to the legend, and he's picked the right actor to fill in the outline of that legend.

Depp is as close to being a '30s-style movie star as we've got these days, and his Dillinger offers a peculiar mix of star quality laced with pathos: Even as he flashes that instant charmer of a smile, there's also something gaunt and haunted about him, as if he were living his life in reverse, as if he already knows how it's all going to end. Maybe that's why, when he woos lowly hat-check-girl Billie with a gift -- a coat with a luscious fur collar, nicer than anything she'd previously dreamed of owning -- the flash of pleasure that crosses his face actually seems to mean something. Depp doesn't shade his performance with obvious shadows of foreboding. What he does is more complex and more difficult: He acknowledges that the grab-it-and-run approach to pleasure, and to life, has its limitations.

Beyond what Depp conveys with his characteristic subtlety, "Public Enemies" doesn't offer a particularly deep psychological study of either Dillinger or Purvis, even though it attempts to limn their delicate rivalry. We're supposed to root for Dillinger yet harbor a grudging respect for Purvis -- but the latter is something of a tough sell, with a dullard like Bale in the role. I don't think Bale is a lost cause as an actor -- or at least, I hope not: He's been terrific in fairly recent pictures like Todd Haynes' Bob Dylan nonbiopic "I'm Not There" and James Mangold's western remake "3:10 to Yuma." But too often these days -- particularly in the Christopher Nolan "Batman" pictures -- his performances have been marked by a dully mechanical efficiency. In "Public Enemies," you can practically hear those delicate veins in his temple throbbing: They're acting as hard as they can and Bale doesn't let us forget it for a minute.

Mann doesn't waste Bale -- if anything, he gives the actor way too much screen time. But others here become lost in his mixmaster shuffle, and "Public Enemies" would be a better movie if certain performers had been shifted to the foreground. Cotillard is the biggest casualty: Her Billie is a storybook moll, a wide-eyed smart cookie with a keen sense of class consciousness. (As she reveals to Dillinger, she's part Native American, and her mixed-race background will always mark her as an outsider.) Cotillard and Depp are wonderful together -- Billie's insecurity is like a welcoming little well for Dillinger's tenderness -- but they have only a few scenes together; the movie leaves us parched and longing for more of them. Late in the picture, Cotillard has an exceptionally fine moment with Stephen Lang, who gives a carefully shaped performance in his small role as Charles Winstead, one of the Dallas lawmen ultimately called in by Hoover to take Dillinger down. Mostly, though, she's a delicate presence lost in the movie's swirl of style; Mann could have, and should have, made more room for her.

That doesn't completely diminish the pleasures of "Public Enemies," which is ultimately an odd blend of frustrating and satisfying. The picture throws off an aura of wistfulness, which may be Mann's acknowledgment that of course he can't re-create the past. The best he can do is to honor the idea of it, storybook-style, and to remind us that before there was gangsta, there were gangsters.