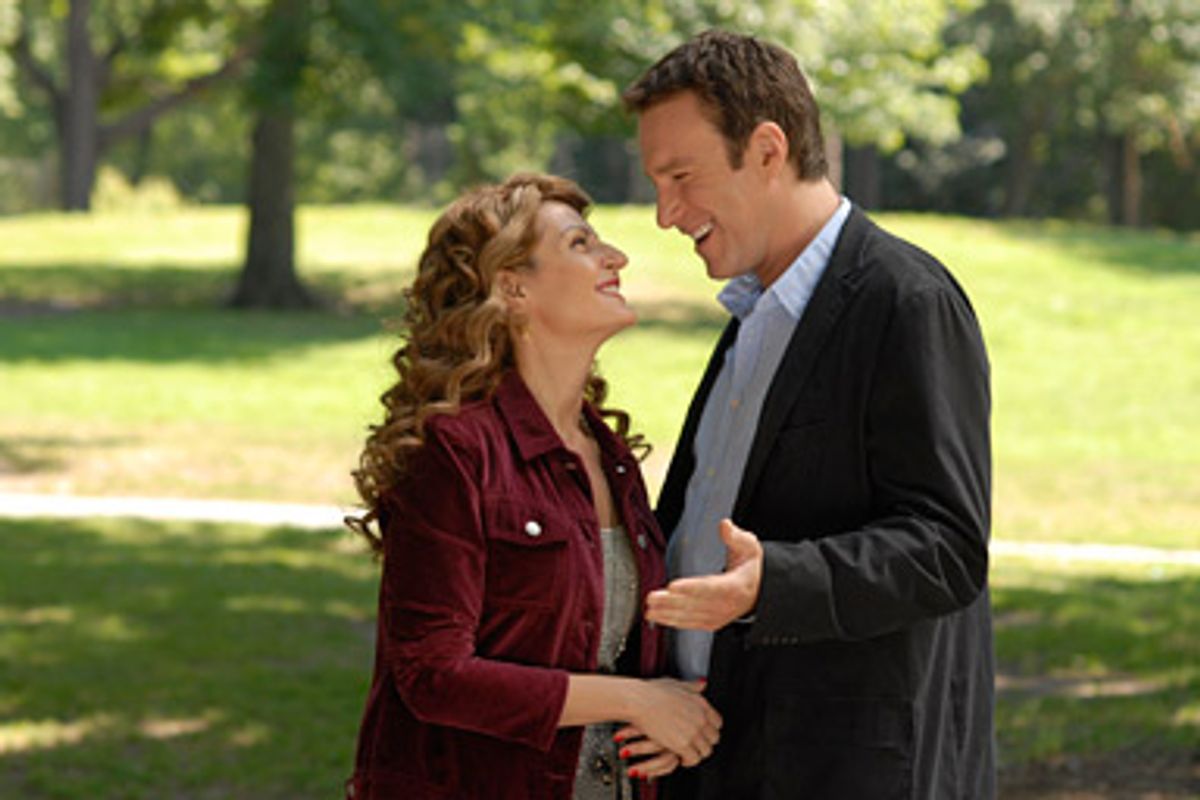 Nia Vardalos and John Corbett in "I Hate Valentine's Day."
--

It's one thing for a romantic comedy to feature two actors who make a valiant go of it but just don't gel: When performers don't connect well in a romantic comedy, they often attempt to act out the idea of chemistry in a kind of pantomime, and even when you can't buy their connection, sometimes you can at least keep yourself busy and amused by filling in the blanks for them.

But it's something else again to have a romantic-comedy star who gazes at her beloved with the intensity of a crazed tiger ready to strike. Nia Vardalos co-wrote (with Stephen David and Ben Zook) and directed "I Hate Valentine's Day." She also stars in it, as Genevieve, a vivacious Brooklyn florist who likes to date but doesn't want romantic entanglement. Her prey -- I mean, her love interest -- is Greg (John Corbett), the shambling nice guy who runs the tapas restaurant next door to her shop. They meet; she thinks he's cute. So she schools him in her method, which consists of a series of pretty strict rules: The guy has to make nice, thoughtful, romantic little gestures; the dates he takes her on must be creative and well-executed; the rules about having sex are a little murky at first, but ultimately, a roll in the hay is A-OK; and, most important, after the fifth date, it's all over. After that point, in Genevieve's view, romance dies, and it's not worth going on any further.

Of course, there's a reason Genevieve doesn't trust men and thus insists on imprisoning herself in her own fake bubble of romance. And toward the end of "I Hate Valentine's Day," she does recognize that her system is a little selfish: It finally occurs to her that once in a while, she should reciprocate a guy's efforts by doing something nice for him, like baking him muffins. Clearly, any love affair should flourish amid such boundless generosity.

And if a girl is going to make muffins for any guy, Corbett is a pretty good candidate. He also appeared, of course, in Vardalos' 2002 big fat breakthrough picture "My Big Fat Greek Wedding." Otherwise, he's perhaps best known for playing Carrie's boyfriend Aidan on "Sex and the City," although he also had a starring role on "The United States of Tara." And in "I Hate Valentine's Day," he's appealing enough, in a laid-back, "What, me worry?" kind of way. He also has to be the calmest restaurant owner ever committed to film -- or perhaps just the laziest. At his busiest, he stands numbly in the midst of his establishment with bland pride, like a dullard king surveying his kingdom.

Even so, the casting is smart: You need a low-wattage personality to play against Vardalos. It takes a secure, stalwart actor to survive being assaulted by that big, peppy smile and those unblinking Maybelline-enhanced eyes for 90-odd minutes. But not even Corbett, sturdy as he is, can do it. Vardalos just doesn't know how to tone it down: She's the star of her own show here, and she never lets us forget it. Everything she does is loud, even when she's not talking: When Greg hurts Genevieve's feelings, she lounges around her apartment, pouting noisily in her negligee. In the middle of a potentially embarrassing karaoke situation, she grabs the mike and belts out a tune, with gusto. She has no problem hiking up her skirt, the better to yank up her pantyhose, while standing on the street, in full view of a group of restaurant patrons. With Vardalos directing Vardalos, the yuks just keep on coming.

Vardalos works so hard at being flirty, fun and charming, that at times you almost feel cajoled into buying her shtick: She's like a department-store cosmetics saleswoman who insists on spritzing you with perfume even as you try desperately to scurry past her. But when Vardalos turns those crazy eyes on Corbett -- those "I'm gonna eat you up, you silly-willy boyfriend, you!" eyes -- she breaks the deal for good. Even though I consider myself a fairly intrepid movie watcher, I wondered if I shouldn't flee immediately: Was Genevieve going to reduce Greg to a little pile of moist bones? I didn't want to stick around to watch (though I did).

"I Hate Valentine's Day," which was filmed on location in Brooklyn, does have a strong and cozy sense of place: Vardalos and cinematographer Bryan Przypek have managed to capture the gruff-friendly feel of a certain type of Brooklyn neighborhood. And Vardalos did have the good sense to cast some potentially engaging actors (including Zoe Kazan and Rachel Dratch) as second bananas, although she gives them very little to do. But those eyes -- they'll haunt me in my sleep. "I Hate Valentine's Day" is a horror show masquerading as a romantic comedy. Maybe Vardalos is just in the wrong line of work.