And so are his Fox News pals, who lambasted Sen. Al Franken's "stolen election" 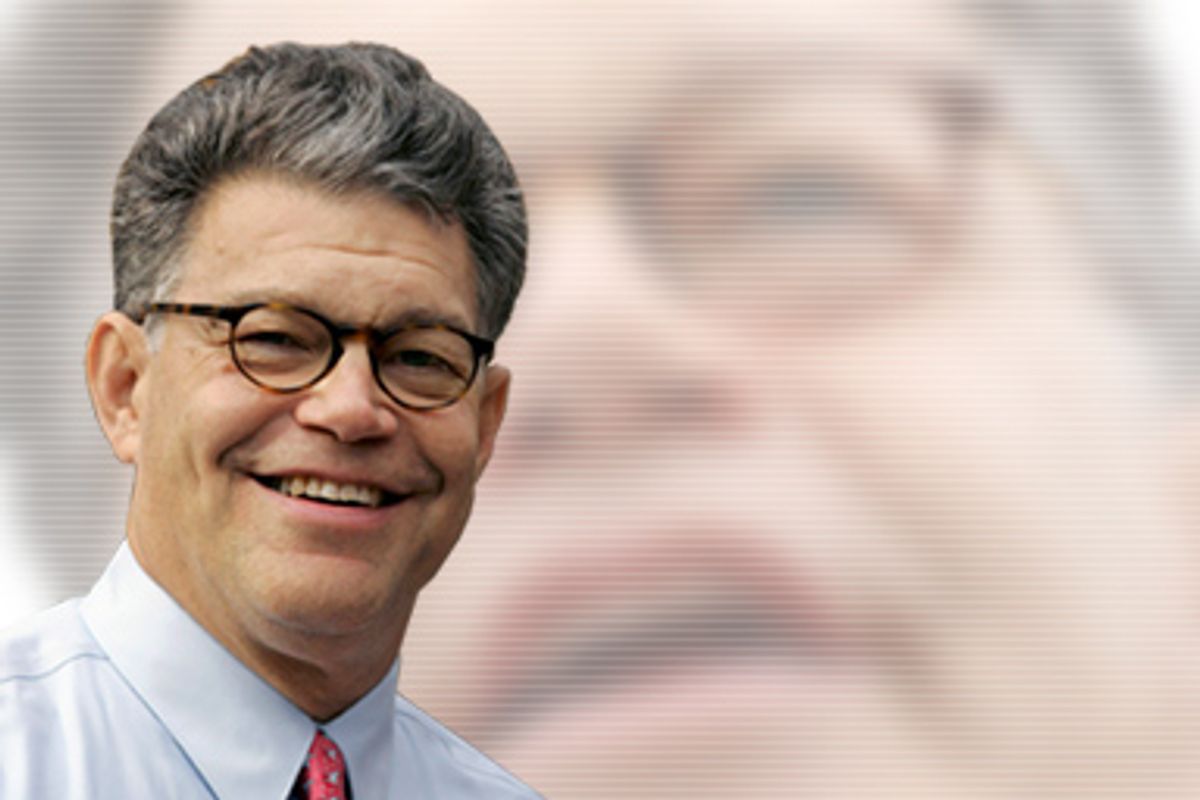 Background: Sen.-elect Al Franken, D-Minn. speaks to supporters during a rally at the mall of the Minnesota State Capitol in St Paul, Minn., Wednesday, July 1, 2009 (AP Photo/Craig Lassig). Foreground:Ã‚ U.S. Democratic senatorial candidate Al Franken (DFL-MN) smiles as he encourages students to vote on the campus of the University of Minnesota in Minneapolis, November 4, 2008 (Reuters/Eric Miller).
--

It wasn't surprising when, after seven months of legal wrangling, the Minnesota Supreme Court declared that Al Franken had won the 2008 Senate race against incumbent Norm Coleman. Still less surprising (although vastly more entertaining) was the simultaneous breakdown of nearly all of Franken's adversaries on the right, whose regurgitated insults, whining complaints and exploding noggins revealed nothing about him or his victory -- and everything about them.

Upon learning that Franken had prevailed in a unanimous decision by his home state's highest court, the usual suspects on Fox News Channel and in the Limbaugh wasteland of radio immediately threw up a barrage of furious invective. Wasting no time on gracious concessions, they concentrated on two themes. First: Franken himself is wild, spiteful, menacing, bigoted and, most of all, deranged (as must be anyone who voted for him). Second: Franken's ascension to the Senate is tainted by the process, which his opponent insisted on prolonging.

Sadly, the most notorious Franken antagonist, Bill O'Reilly, was absent from the airwaves on the evening of Franken's victory. Demure guest host Monica Crowley seemed bemused by the Minnesota outcome. But Glenn Beck, in his semiliterate way, heaped on enough abuse to keep Billo's fans satisfied for the moment. "It shows how crazy our country has gone," he began. "It shows that we've lost our minds. It's like we've slipped through a wormhole. It's like, this look likes the country I grew up in, but no -- Al Franken would never be a senator … We have entered a place to where there isn't statesmanship anymore."

The tenor of the Fox attacks grew more feverish with the ranting of Brian Kilmeade, who judged Franken "barely sane if you read his books, and quite angry in every facet of his life." Kilmeade went on to describe the new senator as "hateful," "evil," bitter," and "maniacal," and again as "angry." Sean Hannity echoed Fox's other amateur shrinks, saying, "This guy, Franken, he's not all there."

So did R. Emmett Tyrell, the Human Events columnist and former editor of the American Spectator, who appeared to confuse Franken's portrayal of a fictional character with the former comedian's own personality, and went on to predict that he will need "anger management counseling" during his Senate term. "He was weird on 'Saturday Night Live' in the 1970s, on which he popularized a goofball character named Stuart Smalley, a self-help guru who repeated over and again, 'I'm good enough, I'm smart enough, and doggone it, people like me!' … My guess is that the Stuart Smalley character is the essential Al Franken, a weirdo."

Speaking for Pajamas Media, Rick Moran called Franken "a bat guano crazy liberal" and gloated over the "rabid, unbridled, hateful partisanship" that will bring both the senator and his party to grief. "It is a pathological, almost clinical condition that will explode from time to time in bitter denunciation of the opposition, supplying bloggers and commentators with a cornucopia of material," wrote Moran with grim satisfaction, adding that "Franken's psychosis" includes a pathological hatred of Christians and particularly Catholics (which may come as a shock to his Catholic wife, Franni).

Then there was Limbaugh, the capo di tutti right-wing capi, who warned with pithy brevity that the 60th Democratic vote in the Senate is "a genuine lunatic."

Calmer but no less nasty was the assessment of the Wall Street Journal editorial page, which insisted that the Democrat had somehow hijacked the Senate seat from the rightful Republican victor. "Mr. Franken now goes to the Senate having effectively stolen an election," said the editorial, without deigning to mention that Republicans in Minnesota, including the governor, had effectively vetted the recount and canvassing from Election Day forward, up to the final Supreme Court decision.

In fact, the most credible assessment of the "stolen election" comes not from Democrats or liberals but from the Republican conservatives in Minnesota. Foremost among them may be Sara Janacek, who told Washington Post readers that those accusations are false. "The state media -- and a majority of the public -- do think Franken's election was legitimate," she said. "We had an open and very public recount process."

As always, the sneering critics of the comedian turned candidate underestimated him, and they still do. Anyone who knows Franken, as I do, sees little of him in the caricatures that have dominated his coverage in the conservative media and too often have shaped his image in the mainstream media. He certainly isn't crazy. He isn't mean. He isn't frivolous. And he certainly didn't cheat his way into the Senate.

In fact, Franken is considerably brighter and far more stable than his enemies, a group whose public behavior and personal conduct are replete with embarrassment, not to mention disgrace. Unlike many of them, he has a solid marriage and raised two outstanding children who adore him -- a personal accomplishment that belies the ugly nonsense about his "anger" and "bitterness." It is the Fox loudmouths who are bitter, no doubt remembering the day their company's stupid lawsuit against Franken was laughed out of court (and made a lot of money for him).

While all the wacky attacks emanate from discredited sources, there are responsible and decent conservatives in America, as Franken would be the first to say. He has made plenty of right-wing friends over the years -- including some of the other entertainers with whom he traveled to Iraq and Afghanistan on USO tours while his blowhard critics were sitting on their butts at home.

Yet perhaps Franken should be grateful to the wingers who have defamed him so relentlessly. It will certainly be easy for the real Franken to vault the low bar set by their dire predictions for his political future.

Franken had the courage to stand against an incumbent Republican in a state with a GOP governor because he wanted to vindicate his late friend Paul Wellstone. Everything his enemies say about him is true of them. They're just too angry -- and maybe too crazy -- to admit to themselves that he beat them with sharp strategy and hard work.