How does your city garden grow?

Seed sales are way up, and raising your own food is all the rage. It's a good time to be an urban farmer 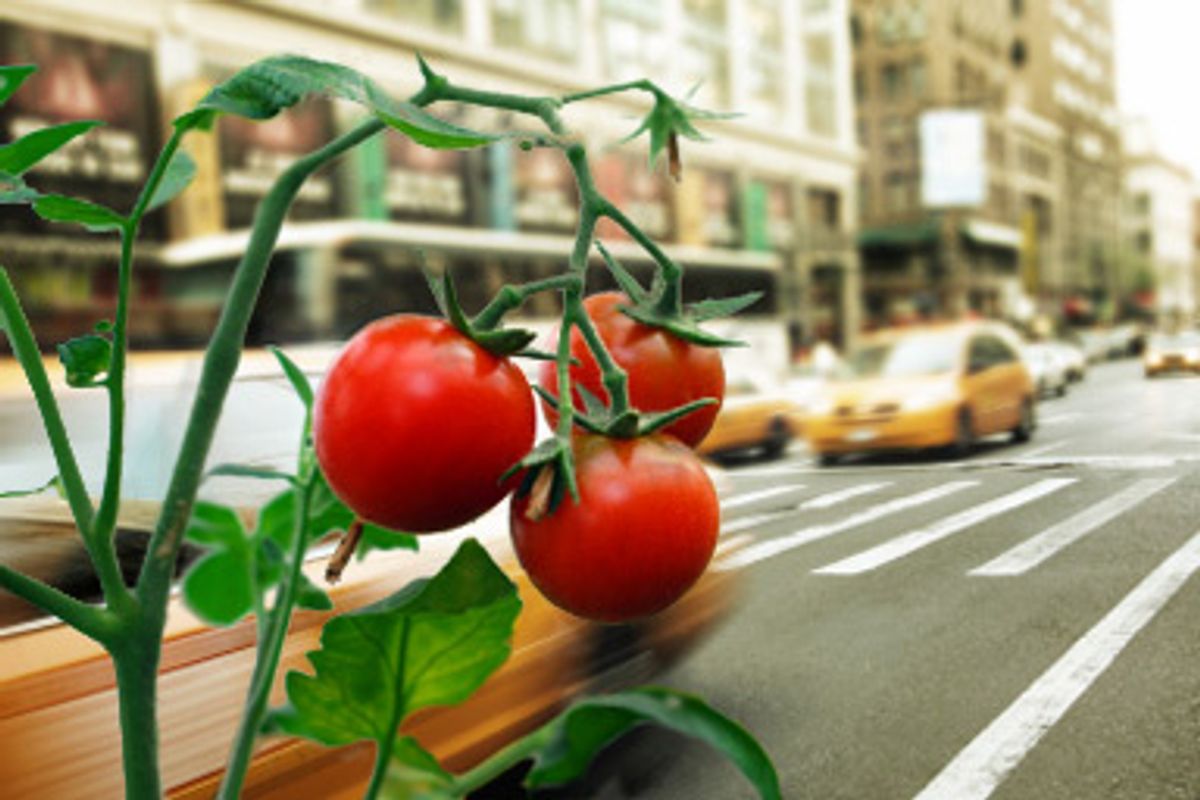 To get to the apartment I share with my boyfriend and teenage daughter, the directions go something like this: Take the R train to Brooklyn. When you get out, you will see a check-cashing place on your right, and a discount coffin outlet to your left. Go straight, past the abandoned gas station, toward the Brooklyn-Queens Expressway. When you reach the building between the abandoned house and the tire shop, you have arrived.

But keep going: Down the stairs, past the bikes, the custom-built shelving and the work bench, you will come to the cement steps that lead you into the yard. And then you might understand why a guest once compared it to that old "Saturday Night Live" skit about the dude with the old banged-up car that opens up to reveal the sweet, pimped-out interior.

In one corner is a flowering mimosa tree; in the other, a rosebush with bright fuchsia flowers that when we first moved in were the only spot of color amid the dirt, discarded toys and 4-foot-tall weeds that we cut down and replaced with a patio made from scavenged bricks, then laid by hand. Running all around the perimeter is our garden: two 16-foot-long raised beds with a dozen heads of lettuce, 10 kinds of heirloom tomatoes, Brussels sprouts, Italian striped zucchini, eggplants, cucumbers, chard and French breakfast radishes, most of which we bought as seedlings at the Polish grocery down the street. We have a Meyer lemon tree, a pomegranate tree and a pineapple, all in large pots that I found at a garden shop in Brooklyn’s Chinatown. Edamame, snap peas, nasturtiums and alpine strawberries snake up the metal utility pole. In early spring, we have lilacs and peonies; by midsummer, we’ll see the star lilies and blueberries and raspberries.

This is, without a doubt, a good time to be an urban gardener. Wandering through our neighborhood, one can spy pots of tomatoes dangling from fire escapes and whole plots of veggies planted on rooftops. In part, this is due to the proselytizing of locavore foodies like Alice Waters, Michael Pollan, and all the city chefs who have created a fetish for lumpen, mottled and thoroughly delicious heirloom tomatoes and, for meat eaters, free-range, grass-fed beef, and the food activists who insisted that access to fresh food is a social justice issue.

One can see the general influence of the same DIY movement that brought us hipster feminist knitters and open-source appliance hackers. And once the recession kicked in, growing one’s food from seed started to look a hell of a lot better than paying the prices at farmers’ markets or Whole Foods: By some counts, seed catalog sales are up 19 and even 75 percent over last year and “recession gardens” are all the rage. And certainly it helps to see Michelle Obama outside pulling weeds with local schoolchildren in the White House organic veggie garden.

But city gardening is nothing new. My boyfriend’s grandfather, raised in Italy, began growing tomatoes, cucumbers and figs in his yard in Sheepshead Bay, Brooklyn, in the '50s. My friend Amy remembers her father, who grew up on a farm, filling their front yard in suburban Park Forest, Ill., with lettuce, broccoli, carrots and marigolds (the latter repelled the pests) during the '70s and '80s. And during World War II, backyard "victory gardens" supplied as much as a third of the produce consumed in 1943. “It bothers me when the media frames this as something new,” says Bryant Terry, food justice activist, author of “Vegan Soul Kitchen,” and a host of the PBS series “The Endless Feast.” “It’s really just the old practices being reinvigorated.”

Over the past nine years, Terry has worked to get fresh, local, sustainable food back into cities and the Deep South; his next book will be about how he and his fiancée managed to live entirely off the food grown in their garden in the front yard of their home in the Laurel District in Oakland, Calif., and from Community Supported Agriculture (CSAs). “When people talk about eating sustainably, they always say it’s too expensive,” he says, “Well, yeah -- if you’re relying on the organic line at a corporate-owned supermarket, it’s going to be expensive.”

But the current fad for fresh food is rooted in the deep traditions of the kitchen gardens kept by Appalachian grandmothers, European immigrants, and African-Americans in the Deep South. “So many of the things I’ve been trying to educate people about food go back to the lessons I learned as a child,” he says. “My grandparents took the lessons they learned as farmers in rural Tennessee into the city. My paternal grandfather had an urban backyard where every available inch was used to grow food. There was a shed in back where he raised chickens. In the front yard was a mini-orchard — pear trees, peach trees, plum trees. We always had far too much food for two elderly people. They gave a lot away to their children, to neighbors, to church members. We essentially had a CSA program in Memphis in the '70s and '80s.”

Novella Carpenter, author of the new memoir “Farm City,” also learned how to raise food from her parents, back-to-the-landers who moved with their two daughters to a rural farm in Idaho during the '70s. But her mother couldn’t take the cultural isolation and her father, in Carpenter’s words, “went feral.” So when she found herself hankering for farm life, she knew one thing: she sure as hell wasn’t going to move to the country to do it. “I wondered if I could have it both ways,” she writes, “to sop up the cultural delights of the city while simultaneously raising my own food.”

By urban farming standards, Carpenter’s farm, located on a dead-end street in a West Oakland neighborhood known as Ghost Town, makes most of the rest of us look like rank amateurs: Her “garden squat” went up in a vacant lot next door; she raised bees; kept chickens for eggs; and ended up raising ducks, turkeys, rabbits and finally two pigs for their meat. “Looking back at my parents' history and comparing it to my present,” she writes, “I recognized that if my parents were Utopia version 8.5 with their hippie farm in Idaho, I was merely Utopia 9.0 with my urban farm in the ghetto, debugged of the isolation problem.”

Not everyone’s experience with urban livestock goes off quite so well: Jennifer in Boise, Idaho, was thrilled when she found out she could keep up to three hens within the city limits (most cities will allow you to keep hens for laying eggs, so long as you don’t have a rooster). But she was less enamored of the “wet, smelly, decaying, bug-attractive area of the yard” that came along with the three Rhode Island Reds she bought off Craigslist. She came around once the birds began producing fresh, perfect eggs -- until the whole flock was decimated by a rogue raccoon.

Even those without outdoor space can rent a plot to grow veggies at a local community garden (though in some cities, wait lists can run two years or more). For the past seven years Jeremy Barrows, of Hartford, Conn., has grown veggies on a community garden on the site of a former nursing home that burned down in 1945 due to faulty Christmas decorations, killing 21. “I pay a whopping $15 a year and I chip in the same amount to the foundation as a donation,” he says. “But having worked the same plot for several years, improving the soil with my own kitchen compost, I have more of a sense of ownership of it than I do of my rented apartment.”

The downside of urban gardening is that if you don’t test your soil, you might be growing your very own backyard poison apples (or snap peas, or collard greens or carrots), which sort of defeats the point. Some urban and suburban gardeners have been dismayed to discover that their organic veggies have been gestating in great vats of lead-poisoned soil: One organic gardener quoted in the New York Times earlier this year found his veggies contained more than 90 times the amount of lead expected to occur in nature.

We worked around that particular problem by building raised beds, lining them with landscape fabric, and trucking in 60 bags of fresh soil and lumber in borrowed cars and, more often, bit by bit in a metal granny cart from Home Depot and Lowe's and gardening stores, conveniently located across the expressway from us.

Unfortunately the soil alone, even at $6 a bag, was enough to make our garden the most expensive endeavor we took on last year. (Cheaper solutions include mixing lime and compost into the existing soil; Carpenter went all out and borrowed a friend’s truck to haul in rotting horse manure she got for free from local horse farmers). It’s for this reason I sometimes laugh when new gardeners talk about all the money they’ll save on fresh produce. This summer, however -- one in which we, like just about everyone else, are feeling much poorer than we did last year -- we probably spent less on our seed than we would have on veggies at the farmers’ market (or the often better produce sold wholesale at a shop under the expressway).

Yes, we are renters, and no, our landlord didn’t reimburse us for anything other than the wood for the fence we put up after the first one was butted down by the neighbor’s particularly energetic Rottweiler. But few things are as coveted in New York City -- or any other city -- as outdoor space, and we never could have afforded the rent for a two-bedroom apartment with a yard like ours if we hadn’t hacked it out ourselves. My boyfriend likes to think there’s a certain amount of renters’ karma in leaving something beautiful on an ugly block for the next person. Summer days, I write outside with our animals running between my feet, while pulling out the hose and nibbling on mint and arugula between paragraphs. Nights we have friends over and drink cocktails and project movies onto the white wall that adjoins the tire shop next door, while Marcello, the paranoid schizophrenic neighbor who has broadcast his opinions about politics, Cuba and lesbians -- along with the size of his penis -- since 1973, leans out his window bare-chested and reads the newspaper, and sometimes his court documents, at top volume. But when you are sitting on a patio you built with your own hands, next to a big pot of homegrown lavender, the cars on the expressway almost sound like the ocean.