Is Palin setting a poor example for her kids?

We don't yet know the reason for the governor's resignation, but that hasn't stopped the cries of "bad mommy" 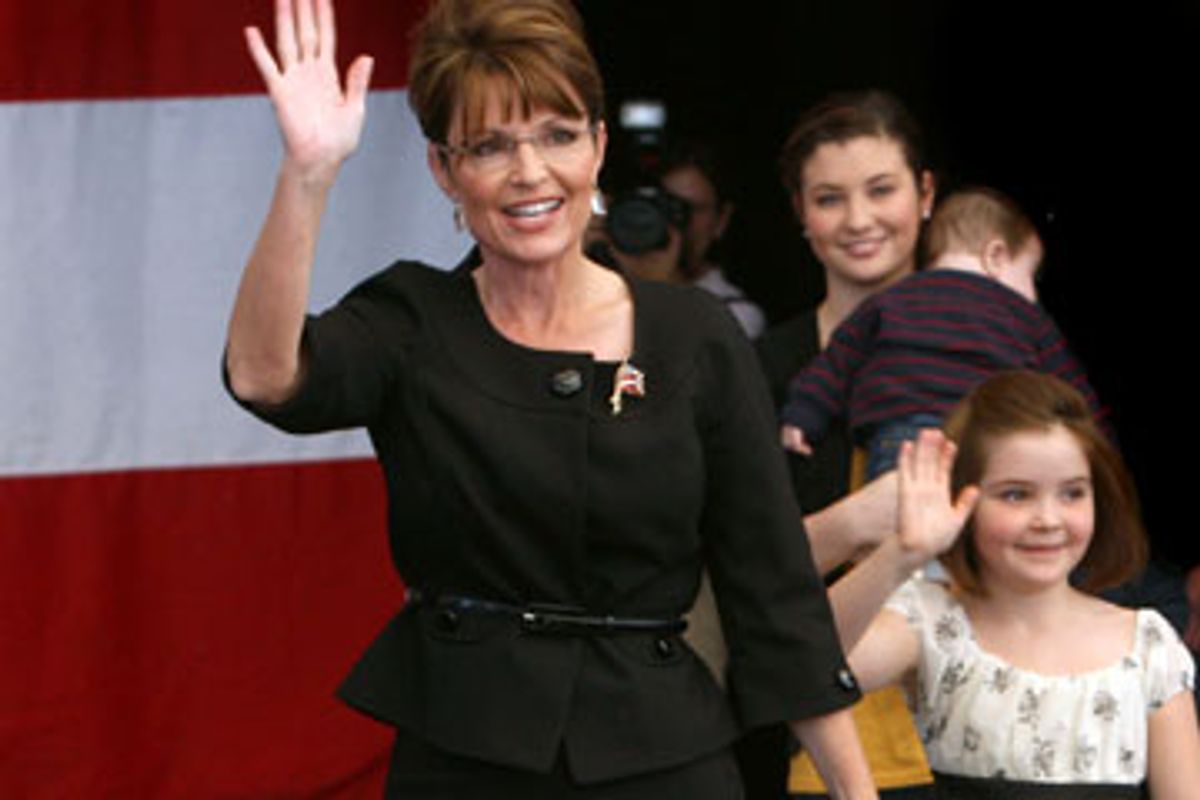 "I have no idea why she quit," begins Good Morning America reporter and "Womenomics" co-author Claire Shipman, writing on True/Slant about Sarah Palin's resignation. But if Palin quit for "personal and family reasons," says Shipman, "she made a really bad choice. It's exactly the wrong lesson to teach her children. They may, may, get to see more of her now. But what have they learned? That when things get tough, you quit? That when you don't like the way something is going, you can just pull out?"

Bad mommy! And Shipman has the good mommy cred to prove it: "As a mother who struggles with kids who want to drop out of soccer camp after one day, or abandon mother-son piano camp because it's boring (it was, and I was dying to quit too), it's clear that kids learn enormously from our example." Y'all got that? If you made an obviously poor choice about how to spend your time, you may not subsequently choose to curtail the misery. Many long careers and marriages have been built on the simple principle that hating your life is no good reason to change it. This is an important lesson for children.

Don't get me wrong. As recently as a week ago, I told a friend that part of me wishes my parents had forced me to continue with piano lessons. But then, as a grown person who's not (usually) interested in blaming my parents for everything, I am honor-bound to admit there are other reasons why I can't play piano -- primary among these that I have zero musical talent and even less enthusiasm for doggedly working to acquire a pale facsimile thereof. And my parents raised me to believe that if something makes you miserable, it is entirely rational to stop doing it. As life lessons go, I'm pretty OK with that one.

Of course, one hopes Palin didn't enter into public service as a hobby, and that the driving force behind her resignation was not excruciating boredom. (Hey, the piano analogy is Shipman's, not mine.) But that brings us back to the pesky fact that we don't yet know what Palin's true reasons for quitting are. She might really want to spend more time with her kids, or there might be a new scandal about to blow. Or it might be, as many of Palin's moves are, the result of greater ambitions. And if it's about her ambition, then the "bad mommy" line of criticism is even more sexist and irritating. Who cares if those poor, innocent children might be proud to see their mom become the first serious female Republican presidential contender? No one likes a quitter.

The great thing is, it doesn't even matter if this decision is the precursor to a 2012 presidential run or a quieter, richer family life for Palin. Either way, the important thing is that we all agree she's messing up those kids. When she was first announced as the Republican vice-presidential candidate last summer, pundits galore wondered how she would manage to raise her young children while campaigning and potentially serving as veep. Now, she announces that she's quitting a demanding job, ostensibly to spend more time with her family, and somehow, the criticism hasn't changed: A good mommy would never put her own desires first like that! A good mommy would... uh, well, it's not entirely clear what a good mommy would do in the same highly unusual circumstances. But Sarah Palin sure isn't one! Amirite?

For pete's sake, people. Given the many sound reasons to smack-talk Palin in particular, do we really have to keep coming back to stale criticism that's routinely used to disparage women in general?