Riots and a clampdown by the Chinese government have left 140 dead. A primer on who is rioting -- and why 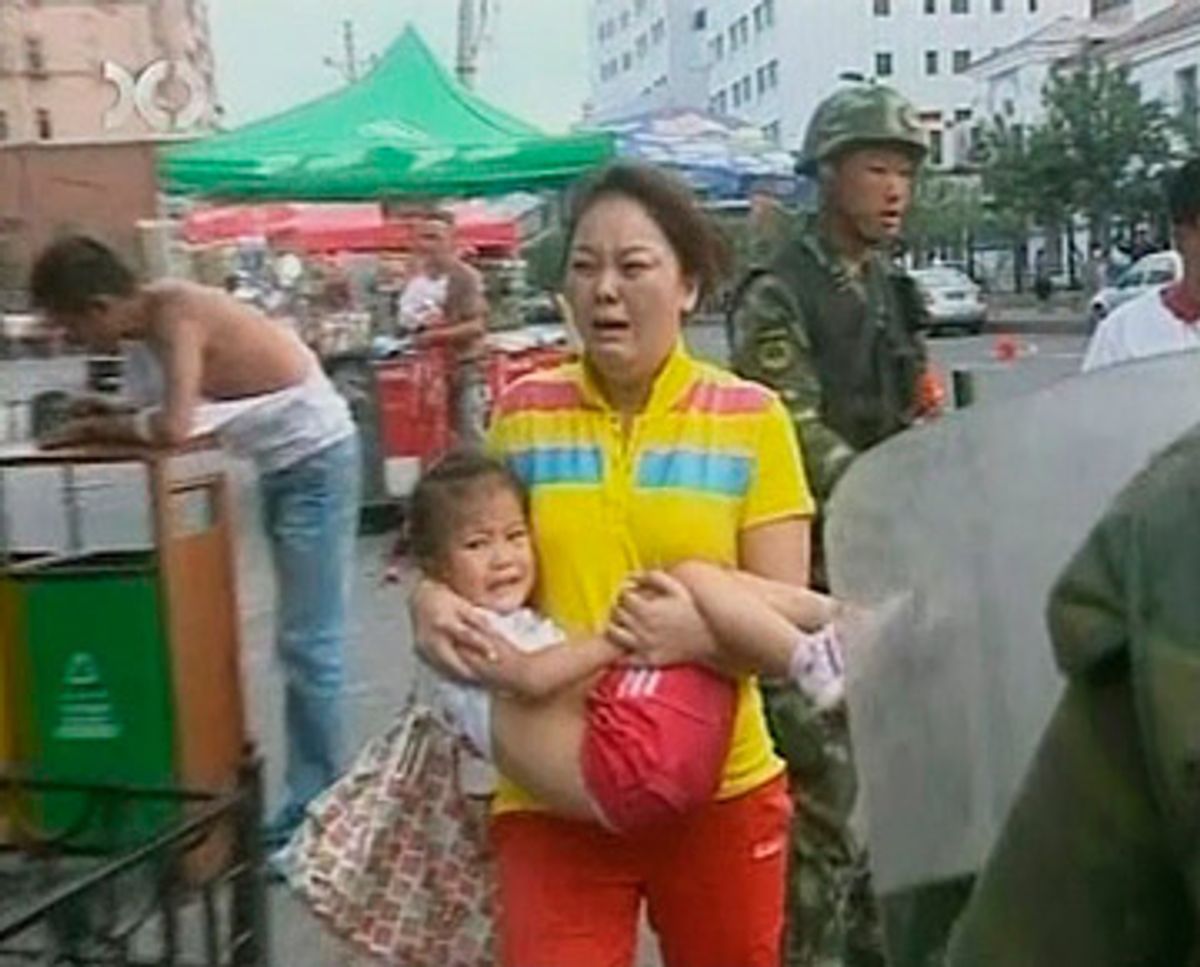 A video grab from Xinjiang TV shows a crying woman carrying her baby next to a soldier in Urumqi, Xinjiang Autonomous Region, China July 6, 2009.

Every week lately seems to bring a new round of unrest in some corner of the world. Iran, Honduras and now Xinjiang, where 140 people died in rioting yesterday. Any such outbreak of civil conflict, of course, has its own complex history, with rival factions and long-held grievances that aren’t immediately obvious to far-off observers.

Situated in China’s remote northwest, resource-rich Xinjiang is in many ways more akin to neighboring central Asian neighbors like Kazakhstan than it is to heartland China. The predominant population in the far west is not Han, as in much of China, but Uighur -- a Turkic-speaking, Muslim ethnic group, which has periodically attempted to separate from China. The Uighurs have been restive under Beijing’s repressive rule for years (as Glenn Greenwald points out, if they were Christians, we might have noticed), and in the 1990s the region saw a wave of protests, riots and bombings, which brought down a heavy-handed government response.

Sunday’s violence was apparently prompted by a fight at a toy factory in Shaoguan, in the south of China. Last week, local Han workers followed up accusations that six Xinjiang boys had raped two girls by attacking Uighur workers at the factory. Two were killed, and 118 were reportedly injured. The rape story now appears to be false. However, Uighur victims of the factory fight have issued statements to Xinhua, China’s state-run news service, denouncing Xinjiang rioters in terms that are suspiciously friendly to the government. "I believe the government will handle the brawl appropriately," says one. "Why did the rioters destroy our beautiful and peaceful Xinjiang region in such cruel manners?"

The rioting yesterday, apparently touched off by the Shaoguan fight, occurred in Urumqi (pronounced Urumchi), Xinjiang’s capital. Though Xinjiang as a whole remains Uighur-dominated, the Chinese government, as with Tibet, has encouraged Han Chinese to resettle in Xinjiang, and the Uighurs are now a minority in their own regional capital of Urumqi.

This tension appears to be at the heart of what happened yesterday. China has long sought to paper over its vast ethnic heterogeneity, and obviously does not look kindly on separatism, especially in a resource-rich region. Not only are the Uighurs occupied, exploited and repressed by Beijing, but they face the prospect of being gradually overwhelmed culturally, and without the worldwide attention Tibet has received for the same danger. (For a comprehensive description of the Uighur's problems, this story is a good start.)

Rioting erupted in the city’s market area, and involved at least 1,000 people before riot police and soldiers managed to lock down the city, likely halting any further public unrest. Demonstrations apparently spread today to Kashgar, another major Xinjiang city.

China has suggested that the victims of yesterday’s violence were members of Urumqi’s Han minority, targeted by angry and fanatic Uighurs, and blamed Rebiya Kadeer and other exiled, Washington-based Uighur activists for instigating the violence. But the Uighur exiles deny the charge, and claim that police fired into the crowds with live ammunition.

It’s extremely difficult to get reliable information out of China, especially at a moment of chaos and lockdown. Nobody will answer phone calls. The government has disabled Twitter, and China Mobile has limited service in Urumqi.

The closest available equivalent to the Twitter feeds coming out of Iran several weeks ago has been the trickle of cellphone videos posted online, apparently from Urumqi. Obviously, we can’t verify them, but these videos below, purporting to be of the riots, are compelling and disconcerting.