Inside the biggest, weirdest funeral ever

Not nearly as crowded or wild as expected, the Michael Jackson memorial was a strange, somber affair to witness 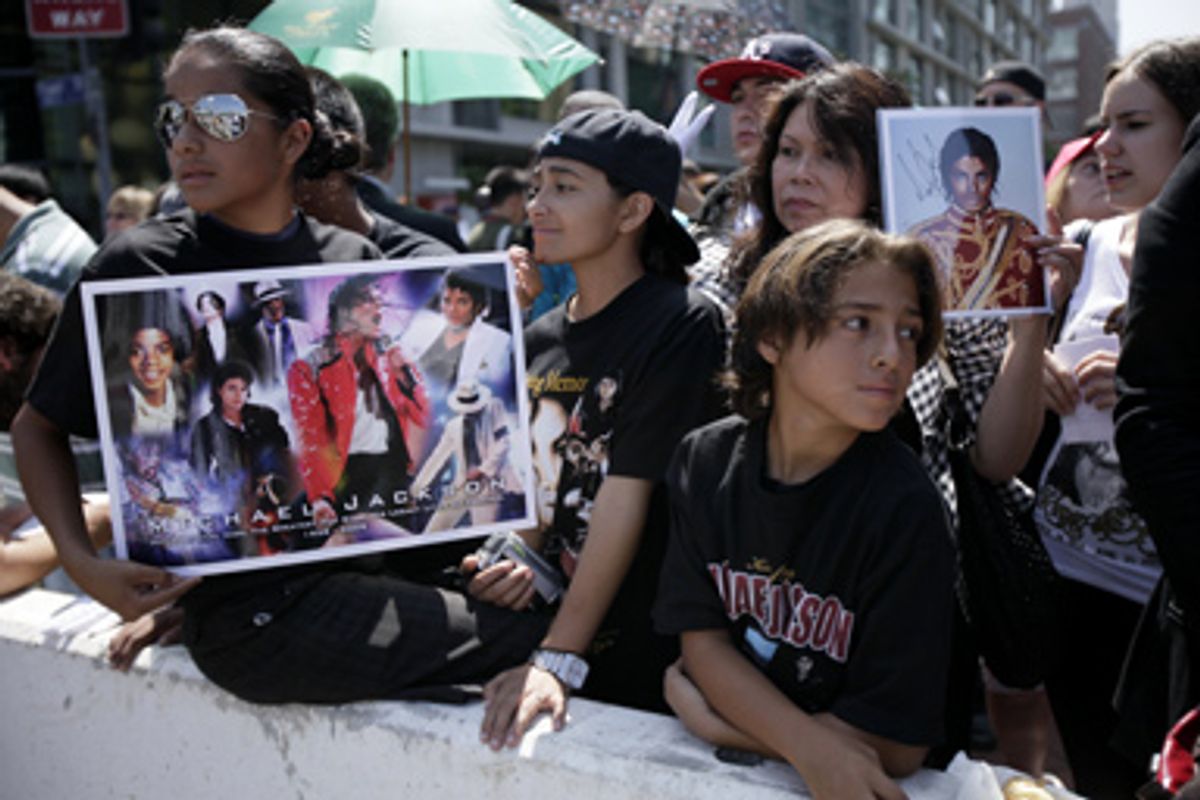 Fans outside a memorial service for Michael Jackson Tuesday, July 7, 2009, in Los Angeles
--

On a warm, overcast early morning in downtown Los Angeles, the 8,000-plus lucky souls who won tickets to Michael Jackson's memorial donned the requisite wrist gear -- glittery hospital bracelets -- and began to swim through the sea of police officers stationed around the Staples Center. This was not your usual summer-day crowd dressed in T-shirts and flip-flops but a somber bunch shrouded for mourning in black suits and heels and skirts. They had come to pay respects to their hero.

Arriving at the venue, the loose procession began to splinter, with some heading into the building, some signing a graffiti wall set up for the anticipated emotional outpouring and others preening before the network and cable media, which had assembled on a catwalk raised slightly above the pavement.

Though much of the crowd appeared to be middle-aged -- at least three attendees told me they were "the same age as Michael" (that's 50, by the way) -- the streets were filled with plenty of young people who would not have been alive to witness the phenomenon of the Jackson 5 or even "Thriller."

"We made 'em last night," two young Latina girls told me, pointing to their identical white ties appliquéd with "I [heart] Michael Jackson." They were cousins, 24 and 16, who had traveled from Palm Springs and Pasadena for the occasion. "Michael's been my idol literally since I could talk," Jacki, the 24-year-old, told me. "Bop! Black Beat! I had all the magazines since 1984, and I literally made a shrine of them the day he passed away." Never mind that she was born in 1984: "My mom got me into him." Her cousin, 16-year-old Natasha, shifting from foot to foot with teenage self-consciousness, noted that she "didn't have the fortunate experience of the '80s." Jacki, meanwhile, had begun to detail the bedroom shrine she had erected: roses, records, those old magazines. "I also have a Michael Jackson pillow," she added, "and I'm sleeping on it."

"The King of Goth is here to celebrate the King of Pop!" yelled a burly man adorned in Kiss face paint and numerous skulls. But it appeared that, like so many of the attendees, he had instead come to burnish his own stardom, a state more hoped-for than real. "I've been on so many casting calls," he said, though I hadn't asked. "ABC wants to me to live with a family for a week and a half," he added, referring to a reality-television opportunity on the horizon. "I've been on 'Gene Simmons Family Jewels.'" He held up his sparkly-gloved hand and began vogueing for photos, introducing himself to another woman as "Fifi LaRue." "Before Kiss and Alice Cooper," he said, to no one in particular, "there was the Jackson 5."

Around 9:30 a.m., a half hour before the show was to begin, I met up with two Norwegians dressed in mirror-image outfits: one in a black brocade suit, the other in a white suit made of shiny synthetic fabric. "We came Thursday," said Espen Eckbo, the one in black. "We didn't even know what were the plans for the funeral, so we just flew over to be here." Eventually, he and his buddy, Steinjo Grieg Halvorsen, obtained tickets via some Norwegians on Facebook. (Several people I spoke to paid for their tickets; one pair of sisters purchased them for the "good price" of $400.) "We are comedians but we are also hard-core Michael Jackson fans as well at these times. That is overshadowing what we are," Eckbo told me. He explained that it had been difficult to be a comedian-fan throughout the years, with "Michael Jackson the subject of so many jokes." "Are you famous in Norway?" I asked him. "You could say that," he said dryly, "but then again, Norway is a very little country, like a few blocks in L.A."

Little eddies of reporters and amateur photographers swirled around such characters, inquiring about their bright costumes and florid memorabilia. But overall, the crowd was sparse, the mood downbeat. The broadcast journalists on their catwalk filmed the print journalists on the pavement. The ubiquitous police began to herd docile lines of spectators into neat, obeisant lines. ("It looks like more cops and media than people," one clean-cut gay man said to his partner. "It's kind of nice," his partner replied.) As the thin crowd thinned further, several people, probably more Europeans, lit up cigarettes, arousing general annoyance and dismay. Police Chief William Bratton could be overheard giving an interview: "The crowd is much lower than some estimates …"

No kidding. Inside the stadium, minutes before the memorial was to begin, pods of seats remained empty. I counted at least five unoccupied spots in my row. Perhaps the warnings of traffic and crowds had so intimidated people that they just stayed home, like they did with the 1984 Los Angeles Olympics. In front of me, a journalist in a siren-red jacket was rattling off her copy in Spanish into a cell phone while the people around her shushed. It was difficult to tell whether the mood was heavy with energy or lacking it entirely. An overhead announcer asked for quiet, and everyone was. The hush was eerie. Were attendees anesthetized or just self-contained? People vigorously punched in text messages, but no one looked up or attempted to converse with their fellow mourners. There was no crying, no yelling, none of the palpable gravity of Princess Diana's memorial. As I watched the man next to me push buttons on his iPhone, it began to dawn on me how much and how fast our society has changed. These days, the best way to collectively experience a mass event may be alone, in front of one's television or computer.

The many celebrities gathered for the event began to speak. The story of the Jackson 5 was recounted, and Queen Latifah read a Maya Angelou poem. (What's a big schlocky event without one?) Maybe, I thought, the low energy derived from the fact that Michael's death, despite what we keep hearing on TV, wasn't an unexpected tragedy. He had been sick, mentally and physically, for so long -- he was, in many respects, the world's youngest invalid -- and it had been ages since he had made any good music. Maybe the loss of the singing, dancing Michael, the early Michael, had been mourned so long ago, that when he finally died -- of self-ordered anesthesia, it would seem -- it was hard to feel much of anything.

Blocks away from the Staples Center, another crowd, cordoned off by LAPD barricades, swelled. This was a more multi-ethnic group; little English was spoken. One man, an MJ look-alike, told me in Franglais that he had taken three days off of "circuitry" work to travel from French Guyana. Another impersonator dragged around a sad little dirty poodle in a glitter-spangled sweater. An Asian man stood rigidly in a backpack from which a television screen playing Michael Jackson videos sprouted. "Moon walk! Moon walk!" the crowd yelled to him in broken English. The cops attempted to break up the festivities. "What did they say?" someone wondered. A lanky black man wearing a thick silver cross necklace answered. "In English," he hollered, "that means, Go Home!"