Michael's daughter spoke movingly at his memorial. Was it a moment of genuine affection -- or exploitation? 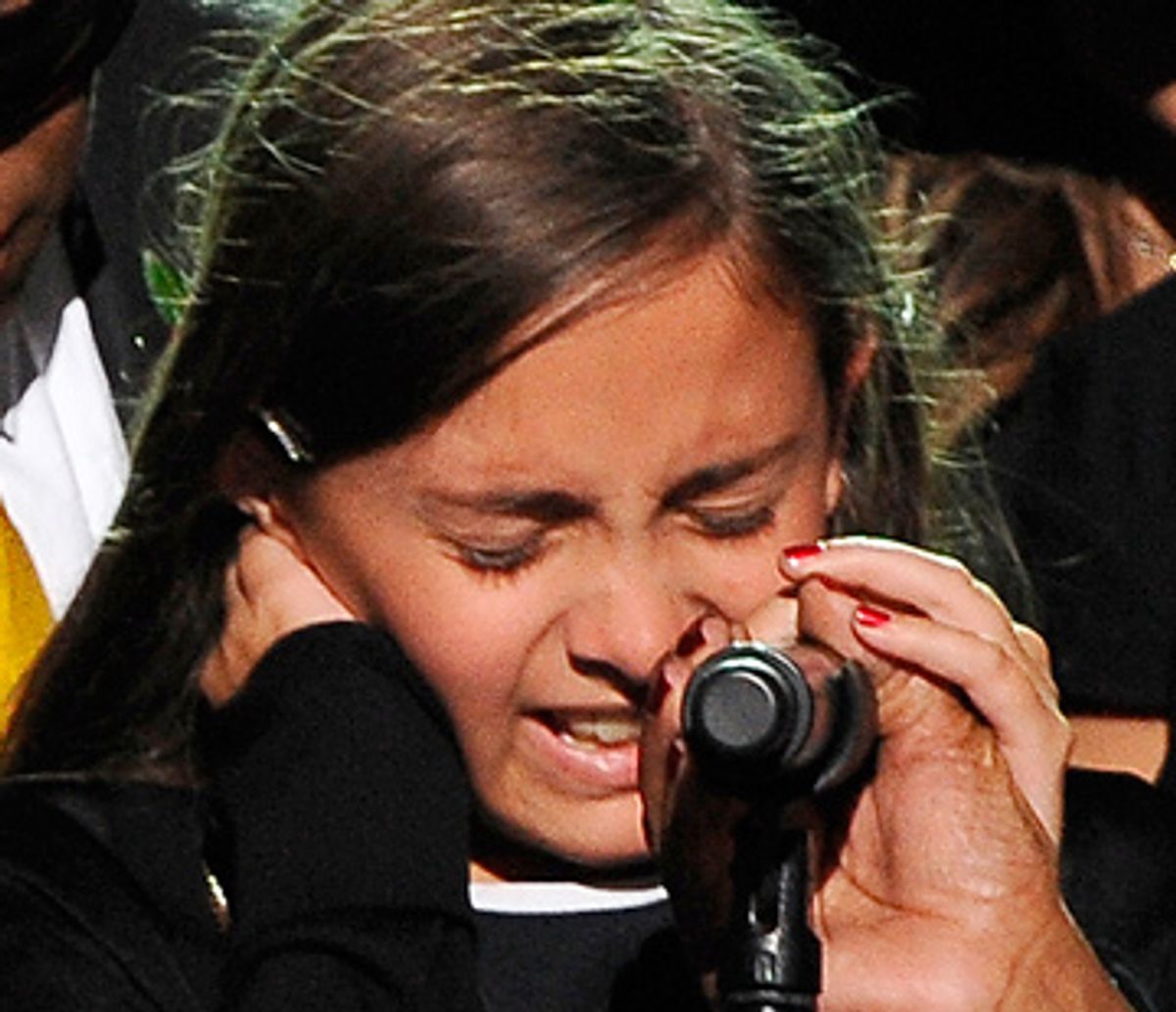 Like most people who watched all two and a half hours of Michael Jackson's televised and webcast public memorial service Tuesday, I have mixed feelings about it. By far the most ambivalent moment, for me, happened at the very end. Clutching Janet Jackson's hand, Michael's daughter Paris stepped up to the microphone. "Ever since I was born, Daddy has been the best father you could ever imagine," she said, through tears, in a speech that has already made its way onto countless talk shows, "and I just wanted to say I love him so much." At the time, I was genuinely touched. The fear so many of us had -- that, no matter what we believe about Jackson's child molestation charges, there's no way he could have been lucid and stable enough to make a good, sane home for his kids -- vanished, and there I was, in tears too. It's a moving thing to witness: a deeply upset 11-year-old girl who, less than two weeks before, lost the only parent she had ever known.

But, later, I started to wonder about Paris' speech. As Joan Walsh wrote, the speakers at the memorial, in their insistence on deifying Jackson and defending his legacy, refused to acknowledge the true weirdness and pain that characterized Jackson's life -- to the point that the funeral verged on propaganda. Were Paris' words all part of the show?

The Jackson family is, first and foremost, a brand. The clan, helmed by notoriously ambitious and abusive patriarch Joe Jackson, has self-preservation instincts that are second to none. And while I would like to believe that Paris' statement was nothing more complicated than a spontaneous display of love and despair, I think it's worth asking whether the moment was orchestrated. The family is, after all, preparing for what looks to be a difficult child custody fight between Katherine Jackson and Debbie Rowe. Paris' words summed up the underlying thesis of Tuesday's memorial: Michael Jackson was a hero, not a pedophile. (Never mind that he may have been both.) If his surprisingly normal-seeming children loved him, the logic goes, could he really have been such a dark and bizarre human being?

But even if Paris' words of affection and loss were completely genuine, I can't help but worry that her emotional debut was exploitative. Shouldn't a truly loving family know better than to spotlight the grief of an 11 year old who has just lost a parent?