And still our vote mattered 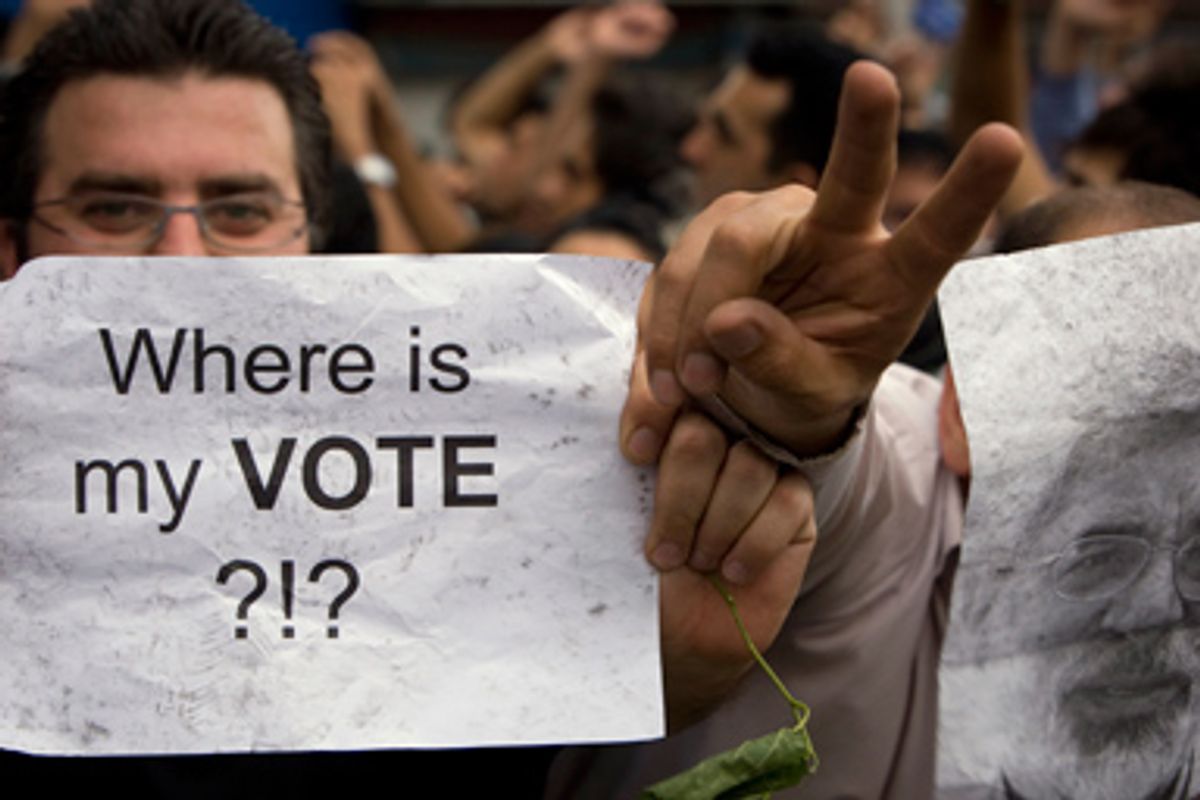 Omid e man ba shoma javanha hast (My hope is with you, the youth). -- Message by Imam Khomeini, found on the first page of Iranian elementary textbooks.

Four Saturdays ago, millions of Iranians woke up to grim news. The early election results came in, improbably bleak at first, then impossibly conclusive. Mahmoud Ahmadinejad had won and in those first hours the recriminations were turned inward. What did I tell you? What did I say? Didn't I tell you that we shouldn't vote?

These are days of questions in Iran, of doubt and reassessment. Had we done the right thing by participating? Had we been fooled? More than any other question, "Where is my vote?" has become the slogan of the post-election movement. A friend wants to know, Who will answer our question? Ki soal e ma ra pasoq mide? Asking where our vote is, is not enough. Democracy must also be about who gets to reply.

Officially the election is validation of the "system." Everyone who turns out votes "yes" to the Revolution and the idea of the Islamic Republic. The larger the turnout the greater the legitimacy. What's important is that domestic and international audiences see that Iranians showed up to vote. BBC and CNN are ushered in to register approval of the election -- the same BBC and CNN now being ushered out, accused of engineering the post-election protests and unrest. No matter, the results showed that we were all winners, 40 million strong.

Of course, as voters we were not obliged to accept the state's premise for our participation. Iranians understood the utility of the occasional vote in a bowed but familiar framework. Four years of runaway inflation, increased trade embargoes and an already devastated international reputation -- with nothing of substance to show for it -- was evidence enough that "change" was needed. Citizens were willing to use whatever political resources were at their disposal to make their lives just a little bit better, which in this case was their right to vote against Ahmadinejad and for Mousavi. They went to vote with the democracy they had been given. It was not perfect, but in the absence of viable alternatives and faced with the impossibility of suffering through another four years of Ahmadinejad, they took it.

That the vote was against Ahmadinejad there can be no doubt. Consider this: Over the 30-year history of the Islamic Republic of Iran, some 30 percent of the population has never voted. These are the true disbelievers, citizens who take pride in having a blank shenasname, or identity booklet. They are the friends and family members who take every opportunity to remind the rest of us, at the dinner table, caught in traffic, sitting in the park, that voting is a mistake, that you ought not participate in a system that is at its core rotten.

Except ... Except this time a good half of these nonbelievers came. They came, pulled, pleaded -- coaxed into voting by sons and daughters. They came this year, dramatically reversing what had been a steady decline in participation, lifting turnout to heights not seen since the early days of the Revolution. With the much ballyhooed rural vote already in the bank for the president, the only place left for Ahmadinejad to make up his reported 6 to 8 million new votes was with the apostates. Are we really to believe, as some are now insisting, that these many millions showed up to vote for the incumbent?

There's no doubt the vote mattered. Had we not voted, had we not stood in line and suffered this fate together, then we would not have come to the square, we would not be climbing the rooftops every night to sing protests that our votes were so clumsily and needlessly taken away. The fact is that up until four Saturdays ago, Iran's system, with all of its limitations and compromises, was not completely rotten. Our peculiar democracy permitted faith in a residual uncertainty, in the possibility that the guy who can't possibly win, whom they won't let win, still just might. June 12, 2009, ended that uncertainty, brought clarity.

This is the age of questions in Iran, of hope and reevaluation. One marvels at the opportunity lost in these elections and what might yet be gained. A friend, no foe of the Revolution, describes standing in line for two hours with his 10-year-old son to vote. He tells us with some difficulty how his child now cannot sleep; at night he watches television to see what will happen next. This father understands what has happened to his boy. His son wants to know, Why has this happened? How do they steal votes? They'll fix it, right?

Who will answer his question? Will he answer it for himself?