Is the Airbus a lemon?

Two Airbus crashes in two months: Should we worry? Plus: Welcome to the Six Continent Club! 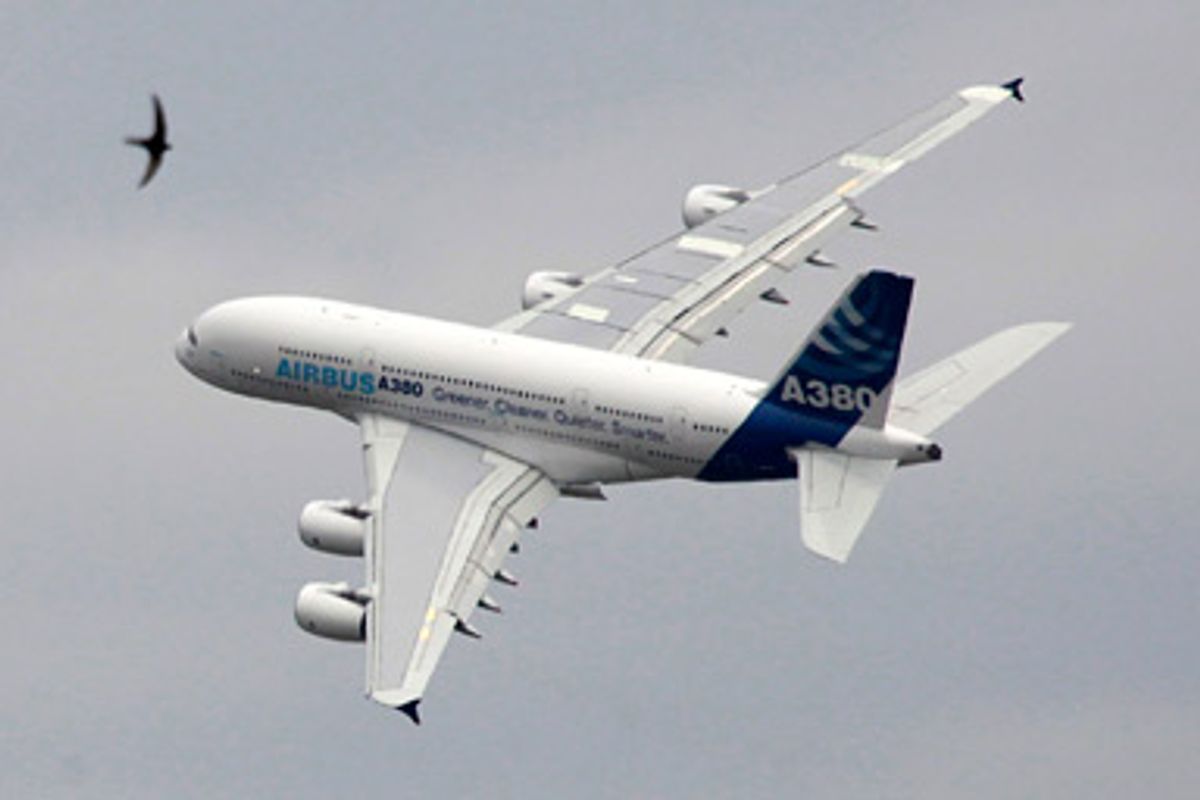 An Airbus A380 takes part in a flying display three days before the opening of the 48th Paris Air Show at the Le Bourget airport near Paris, June 12, 2009.
--

Last week's crash of Yemenia Airways Airbus A310 in the Indian Ocean was the second major accident in two months involving an Airbus. The other, of course, was the crash of Air France Flight 447 near Brazil. Several e-mailers have wondered if this pair of disasters hints at some widespread danger specific to planes manufactured by Airbus. Are they in some way defective?

Both incidents are a long way from being solved, but the answer, at least for now and probably for good, is no. Remember that approximately half of all large commercial transports out there are Airbus products. Nearly 5,000 Airbuses operate tens of thousands of flights every day, in more or less perfect safety. Two incidents in quick succession, while certainly an aberration, is not a sign of some deadly pathology.

The quasi-controversy over Airbus' use of composite materials in the construction of its vertical stabilizers (tail fin) is something I talked about in this space several times, dating back to the crash of American 587 in 2001. Yes, it's possible this construction renders certain Airbus models more likely to suffer structural failure in very extreme conditions. But this is unproven, and even if true it does not make the aircraft unsafe in any practical sense.

Ditto for the high-tech automation peculiar to Airbus cockpits. There are quirks to the plane's automation that, to be frank, not all pilots are fond of. Under certain edge-of-the-envelope conditions, the plane locks out input from the crew. Airbus engineered it this way to keep pilots from unintentionally making a bad situation worse, but there are perhaps a few one-in-a-million scenarios where the ability to override this automation is warranted.

I say "the plane." Actually, there are several Airbus models of various sizes and capabilities:

Airbus Industrie was formed in 1970 as a multinational consortium of the state aerospace industries of France, Germany and the U.K. Spain joined later. Its first plane, the 250-seat "air bus" A300, was the world's first wide-bodied, twin-engine jetliner. It entered service with Air France in 1974. Eastern Air Lines became the U.S. launch customer, deploying the big jet on routes along the Eastern seaboard, including its famous Air Shuttle between New York and Boston.

Production of the original A300 ceased in 1984, and was replaced by the A300-600. The -600 was bigger and considerably more advanced, with a two-pilot crew and a host of other improvements. A limited number remain in passenger service today, including several with American Airlines.

The A310 is a derivative of the A300-600, with a shorter fuselage and redesigned wing. It entered service with Lufthansa in 1983. You don't see many A310s carrying passengers anymore, though about 70 are currently hauling freight for FedEx.

The A320 is the consortium's narrow-body twin, and one of the most successful commercial aircraft ever built. Over 3,000 have been sold around the globe, including the smaller A318 and A319, and the stretched A321 derivatives. Its direct competitor is Boeing's even more successful 737 series.

The twin-engine A330 and four-engine A340 are the wide-bodied, long-haul workhorses. The elegant A340 debuted first, with Lufthansa in 1992, and is arguably the best-looking of the Airbus fleet. It comes in four flavors, the -200, -300, -500 and -600. The ultra-long-range -500 currently flies Newark-Singapore for Singapore Airlines -- the longest scheduled nonstop in the world.

The A330 is essentially a twin-engined A340, with a slightly shorter range and payload. The plane offers excellent per-seat efficiency, and competes well against Boeing's 777. More than 500 have been sold.

Then there's the double-decked A380, history's biggest and newest jetliner, now flying with Singapore, Emirates and Qantas. The order book stands at around 200, and the jury is still out with respect to this beast's success. All we know for sure of the A380 is that it's the ugliest commercial jet ever conceived.

On the drawing board is the A350, something of a widened and upgraded A330, destined to compete heartily with Boeing's beleaguered (for now) 787 Dreamliner.

The Yemenia crash has also kindled talk about the safety of foreign airlines. Somehow the national airline of Yemen doesn't inspire confidence in the minds of most Americans. As it happens, Yemenia has been around since 1961 and this was its first-ever fatal crash. The airline carries 1.3 million people annually using a fleet of about 20 planes, including A310s, A330s and 737s.

The notion that airlines from the developing world are categorically less safe than American or European airlines is a stubborn myth that I have long tried to dispel, admittedly with limited success. Some are, some are not. And virtually no airline is outright dangerous.

Below is a partial list of airlines that have gone fatality-free for at least the past 25 years. This list was first presented in this column four years ago and is little changed since then.

You may or may not be surprised by some of the second- or third-world finishers. And allowing for one fatal mishap opens the list to several others, including Royal Air Maroc, TACA, Mexicana and, yes, Yemenia.

Whether this necessarily attests to exemplary levels of oversight and professionalism is available for argument, and a caveat is due. Air Zimbabwe, for instance, is a tiny outfit with fewer than a dozen planes. Compare it to American Airlines, for example, which has close to 700 planes and makes thousands of daily departures. Nonetheless, any unblemished legacy lasting a quarter century is impressive on its own accord, particularly when the setting is an underdeveloped nation with substandard facilities and infrastructure.

The Yemenia A310 carried a French registration. Contrary to some reports, the airline had not been banned from operation into the European Union, though it was subject to special scrutiny by European safety officials.

In 2005, the EU began compiling its long and controversial airline blacklist. The list is reviewed every three months. The most recent version bans select airlines from various countries, as well as all carriers from Congo, Angola, Benin, Equatorial Guinea, Indonesia, Kyrgyzstan, Liberia, Gabon, Sierra Leone and Swaziland.

Importantly, the vast majority of the forbidden operators are airlines that a typical traveler wouldn't ever fly on in the first place. They consist mainly of small cargo outfits, most of them based in West and Central Africa. To give you some idea, the highest-profile names on the blacklist have belonged to Indonesia's national carrier Garuda, North Korea's mysterious Air Koryo and Afghanistan's Ariana. (The latter is a company with a storied history going back more than 50 years, but for obvious reasons lacks the resources to currently meet European standards.)

African flying tends to be particularly and often unfairly maligned.

It is important to make the distinction between mainline African air carriers, which are very safe, and lower-tier cargo and non-scheduled commercial operators. Flying on South African Airways, Tunisair or Ethiopian Air Lines, for example, is not  the same as flying aboard some Congolese upstart or air taxi outfit. Africa's "dangerous" airlines are not even airlines as most people think of them.

On an entirely different note ...

L.A.-Sydney is an intensely competitive route, with up to five daily nonstops split among four different carriers. Delta will have its hands full against the likes of Qantas, United and the newest Richard Branson venture, V Australia. There are those who believe that Delta has handicapped itself by choosing the wrong plane for the mission. Qantas flies the A380, and V Australia use a 777-300 -- aircraft with better economies of scale than the smaller 777-LR.

But right plane or wrong plane, speaking as both an aerogeek and an American, this inaugural excites me quite a bit. It excites me because Delta thus becomes the first U.S. airline in over 20 years to operate scheduled passenger service to all six continents simultaneously (no haggling about Antarctica, please).

For two decades, membership in the vaunted Six Continent Club (as it was dubbed and created by yours truly, writing here some months ago) has been the exclusive province of a handful of Asian, European and Middle Eastern carriers. Delta becomes the first U.S. member since the legendary Pan Am. (And it achieves this status, by the way, independently of any routes from Northwest, with whom it is in the process of merging.)

As for why the average American citizen might care, let's go back for a moment to the weeks and months following the terrorist attacks of 2001, when as a nation we were becoming increasingly withdrawn and insular, at times xenophobic. The nation's airlines rapidly curtailed many international routes. One of Delta's first moves, for example, was the elimination of Dubai and Cairo from its network. Was this fearful and isolationist trend more than a simple, temporary affliction of economics? Was it a withering of national spirit?

"In the months after September 11th, and before the 2003 Iraq invasion, international bookings on US carriers were off as much as 40 percent," I wrote in my now embarrassingly out-of-date book, published back in 2004. "As of yet there has only been partial recovery. How long this downswing lingers remains to be seen, and depends on the political climate and American mindset. Frankly, the latter worries me almost as much as the former. Cutbacks in the name of economics are one thing, but at the same time they strike me as an echo of America's growing isolation from the world at large. I find it disturbing that our airlines no longer serve vast regions of the world -- indeed whole continents."

Well, that was then. The turnaround has been fairly unprecedented. The effects of the ongoing economic malaise notwithstanding -- and indeed they are serious -- Americans and their airlines have turned out to be a lot less squeamish than I had feared. And although it plans to trim several money-losing international routes this coming winter, Delta more than anybody has been leading the charge. One can make the argument that Continental's overseas network is no less impressive, but Delta is back to Cairo and Dubai, not to mention routes into Jordan, Israel, Turkey and six cities in sub-Saharan Africa. Cape Town service will be cut this fall, but more African destinations are tentatively on tap, including Angola, Kenya, Liberia and even Equatorial Guinea. Prior to 2006, the total number of African cities served by any major U.S. airline stood at exactly zero.

A free plug for Delta, sure, but it got there first.

This might sound crazy, but as citizens we occasionally need to take pride in our airlines. That's a very tough task for the average disgruntled traveler, but love them or hate them, airlines are more than mere corporations. They operate, in a sense, as de facto ambassadors, carrying the flag -- and us -- to the world's far corners. Pan Am did this with an almost mythic dignity and flair, its trademark blue globe once as internationally recognized as the logo of Coca-Cola. That will never be matched in quite the same way, but give credit where it's due.

Everybody hold hands now and feel the love ...

OK, maybe that's a bit too romantic, and possibly delusional, but I hope you'll see my point. It's so easy to take flying for granted, but how can a traveler not appreciate the fact that countries and cultures, separated by once-insurmountable distances, are now so eminently connectable? And it's the airplane that makes it happen. Flying to all six continents? No matter which airline gets your money, it's a rediscovery of adventure -- the thrill of striking out somewhere new.

Lastly, the Sydney inaugural isn't the only reason July 1 was special. It also marked the 23rd anniversary of my near-death experience over Nantucket Sound. The story of that close encounter is told here, in one of my favorite-ever columns.