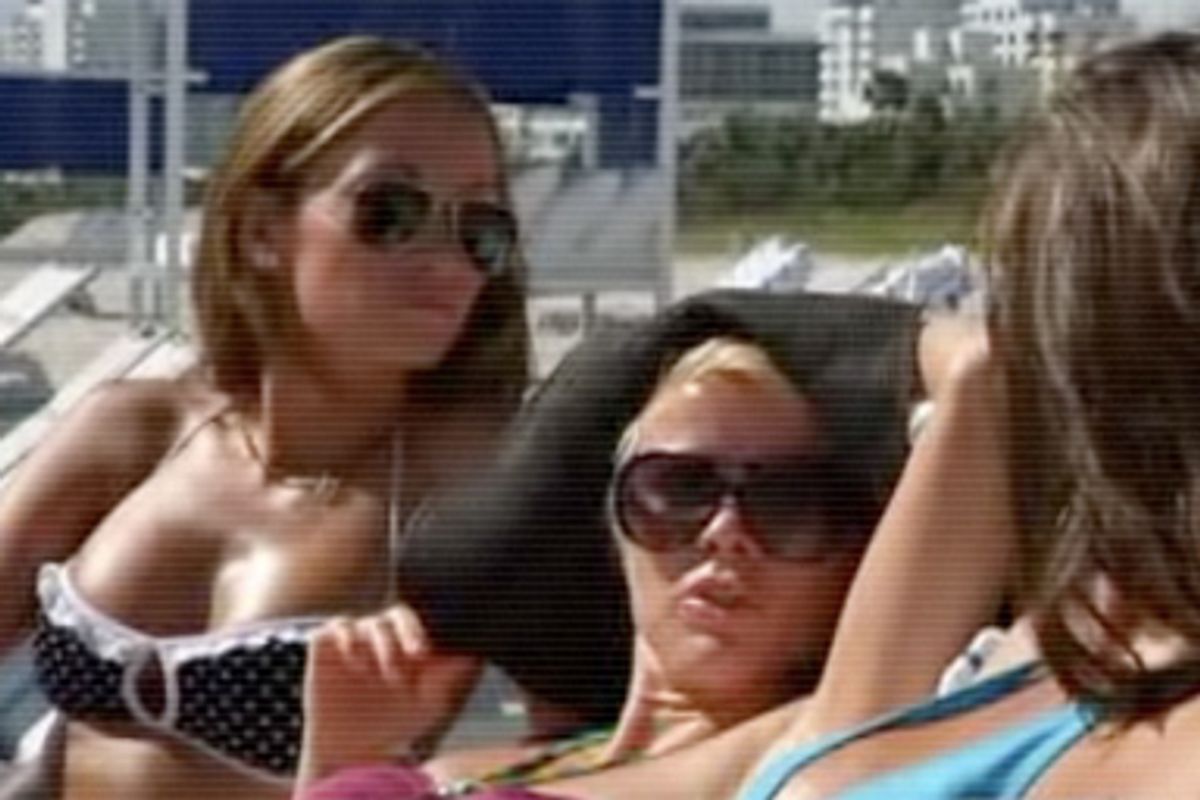 Now that Bravo has thoroughly mined the realm of the filthy rich housewife, its programming prospectors are searching for fool's gold on brand-new demographic frontiers. First came "NYC Prep," a cautionary tale about teenagers whose parents are too rich and important to do the inconvenient work of child rearing, and now there's "Miami Social" (premieres 10 p.m. Tuesday, July 14), a very special TV experiment examining the lobotomizing effects of far too much sunshine, top-shelf rum and tacky, gold-lamé-draped glamour.

Since we all secretly feel that we should be far richer and far more attractive than we actually are, any show about hot rich people is bound to enrage us. Why must we toil away at our lackluster jobs, when we could be teetering around town in bad shoes, letting smarmy macho men sip icy cold tequila out of our spray-tanned bellybuttons? Next, our envy sours to self-righteousness: What has our culture come to, that such vulgar indulgences are paraded in front of our faces every few seconds?

Although it's easy to mistake "Miami Social" for part of the problem, the show actually performs an important service to the public by revealing just how unspeakably dull the life of the club-hopping socialite actually is. Sure, stretching ugly tops over your enormous fake tits and spending way too much money at awful, overpriced night spots might sound like living the dream, but get to know these overly bronzed, gel-haired, empty-eyed souls a little better, and you'll no longer spend your afternoons at work (the way we all do) daydreaming about fishing your bra out of a South Beach trash can at 4 in the morning. Despite its strenuous attempts to glamorize the lives of these young, wealthy, ultra-beautiful denizens of Miami's hottest circles, "Miami Social" reveals them to be horribly mundane.

Not that any of them will admit that there's trouble in paradise. No, no! Everything is perfect.

"I love my job -- it's probably one of the coolest jobs you could ever find," says Hardy, a club promoter, right before we see his "friend" Ariel scolding him for not letting him sit at a cabana that's been reserved for some other guests.

"I really, really like this chick," George, a mortgage broker, tells Hardy of his new girlfriend Lina, the one who's about to skip town and lie to him about it.

"We're the best of friends!" Katrina, a real estate agent, says of Ben, her husband, seconds after announcing that the two of them are getting a divorce. "Nothing's really changed."

"Every bartender, every door girl, every doorman knows me. If Hardy's doing something fucked up, I get a text message like that," says Hardy's longtime girlfriend Trixie, who wants a baby that he seems to have no intention of giving her. "We trust each other," she explains, apparently unaware that trust typically isn't based on an elaborate network of texting spies.

Now keep in mind, these people aren't teenagers with scary parents. They aren't housewives trapped in the suburbs. These are busy professional adults, adults who have a world of choices spread out before them, but who still choose to gel their hair, bleach their teeth and then sit around in small clusters, chatting aimlessly about how much more adorable and special they are than the gel-haired, bleach-toothed crowds closing in around them.

"You know, you're really good at what you do, I admire it," Ariel, a slick-haired lizard of a man, condescendingly tells Hardy. "You say hi to all the people, whether they're good-looking or ugly." Ariel, who describes himself as "one of the most incredible fashion producers here in Miami," is the kind of person who not only doesn't say hi to the ugly people, he wants them kept far, far away from him. "Get the fat girl out of my table!" he barks into his cellphone at one event.

Like the others, Ariel is a perfectionist. But unlike the others, Ariel doesn’t sugarcoat his feelings -- or maybe he’s just smart enough to recognize that playing the sociopathic villain will grant him center stage, particularly when surrounded by such self-consciousness and dishonesty. The only other Miami socialite who’s happy to snipe and demean himself for the cameras is Michael, a celebrity journalist who gamely rambles on about his insecurities, pet peeves and the eternal question of whether he needs Botox or not.

Naturally, Michael and Ariel hate each other, providing the cameras with the only real fun to be found in this swampy beach town

"Kim Kardashian is a reality whore," blurts Michael when Ariel mentions that Kardashian is hosting a party. Ah yes, there's nothing quite like the wannabe pot calling the kettle black.

"She's done a lot of good," Ariel replies in an unusually subdued tone.

"You can do a lot of good and still be a whore," Michael snaps back.

That's true. Maybe these whores are actually doing a lot of good in the world, selling luxury real estate and working on photo shoots and so on. And who knows? Maybe they discuss great literature and analyze the efficacy of Obama's healthcare initiatives when the cameras aren't rolling.

Sadly, though, from what we can see, their lives are so repetitive and tiresome they might as well be toiling away in a Salvadoran sweatshop. Thanks for enlightening us, Bravo. You’re the network that proves you really can do a lot of good and still be a whore.