Are they funnier than a fifth-grader? 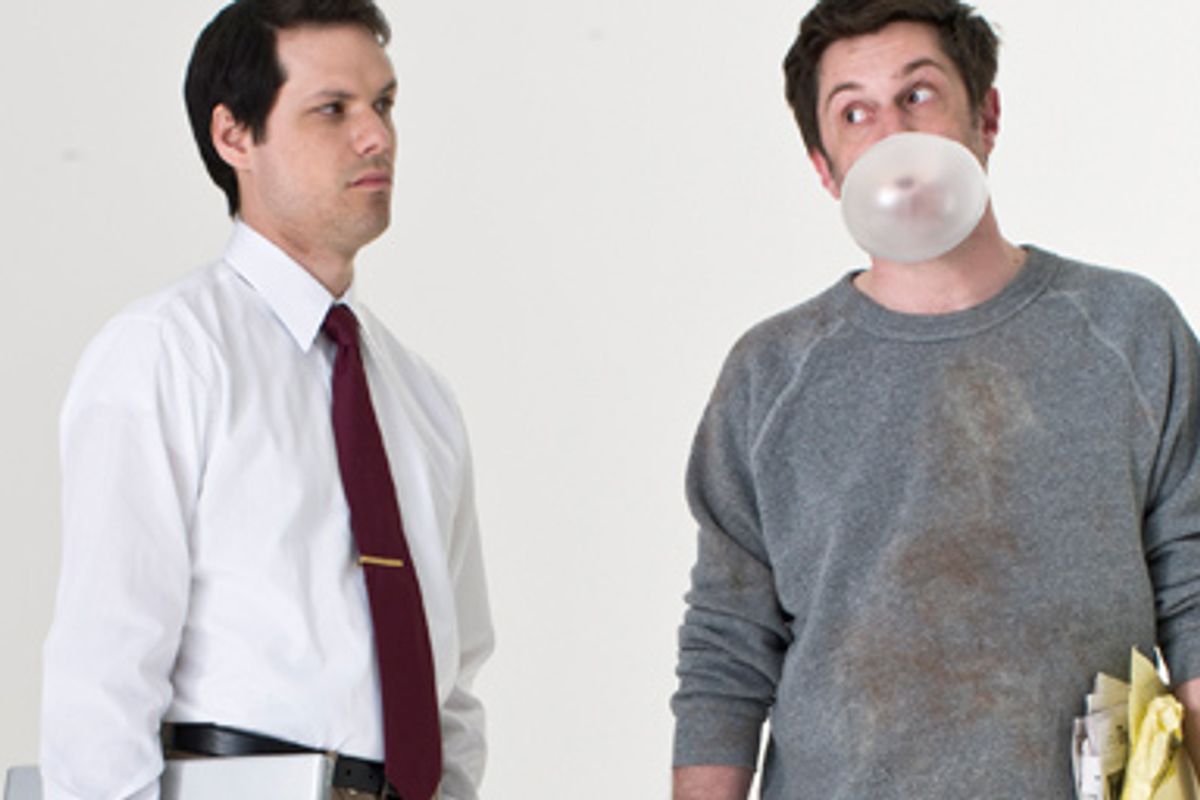 Competitive one-upmanship. Impromptu fisticuffs. Name-calling. Like so many comedy duos, Michael Showalter and Michael Ian Black openly despise each other.

That's the way comedy duos create comedy, after all. Like Laurel and Hardy, the Smothers Brothers or Cheech and Chong, Showalter and Black sneer and chide and flail their arms at each other like enraged children on their new half-hour show on Comedy Central, "Michael & Michael Have Issues" (premieres 10:30 p.m. Wednesday, July 15). In a garbled, weaker amalgam of "The Larry Sanders Show" and "Chappelle's Show," the two men (who appeared together in "The State" so long ago) play themselves as writers and hosts of a fictional sketch show. The format allows the comedians to alternate between a two-man stand-up routine, comedy sketches and "behind the scenes" footage, most of which amounts to a series of petty squabbles between the two disconcertingly childish entertainers.

After an initial bit of whiplash from shifting between purposely unfunny, odd remarks, reasonably amusing sketches, and egocentric tantrums, it's clear why these two settled on such an odd format: They have a lot of different forms of funny to share with the world.

Take their very earnest discussion at the start of one segment, about how drugs are bad:

Black: They [drugs] mess up your mind and they cloud your judgment!

Showalter: And they make you think you can fly.

Showalter: Yes! Unless you're old.

Black: Or, if you just want a little pick-me-up.

Showalter: Yeah. If you've got midterms to study for, and you need to pull an all-nighter?

Eventually the two decide that you should take drugs if you just want music to sound better, if you're bored, or if you really want to feel good. Otherwise, drugs are really, really bad for you.

The sketches range from funny (gay high school boy happily taking chastity pledge) to almost funny (Monty Python-style sketch with king and courtiers that ends with hand-job joke), occasionally stumbling into severe hysteria. My favorite sketch, in the second episode, involves a soft-spoken weatherman who gestures at a map and mumbles "40s" and "60s" while the anchors shout at him, "What did you say?!! When?!!" Yes, it was just a simple, silly idea, one that made me laugh until tears were streaming down my face.

But most of what "Michael & Michael" has to offer is pretty simple and silly, the kind of childish lunacy that can incite chuckles but is only mildly amusing if you're not in the mood.

"Can you, like, go doodle a unicorn or something?" Black says to the show's associate producer, Marla Ratner, when she annoys him.

"Don't you have something to doodle between your legs?" Marla shoots back.

Yes, Michael and Michael have issues, but are they funnier than a fifth-grader? By the end of two sometimes bumpy, uneven episodes, I'd have to say yes. They offer the sort of juvenile high jinx that are admittedly pretty stupid but grow on you, slowly but surely. Whether they're conspiring to buy pot at the park or threatening to beat each other up while their significant others chat amiably a few feet away, the strange adventures of these two bratty little boys will leave you with a small, confused smile on your face, at the very least.

If you're old (but still pretty immature) or you just want a little pick-me-up, watch "Michael & Michael Have Issues." Otherwise, this show is really, really bad for you.