The recession is not colorblind

President Obama and Congress, focus your economic recovery efforts on the communities being hit the hardest 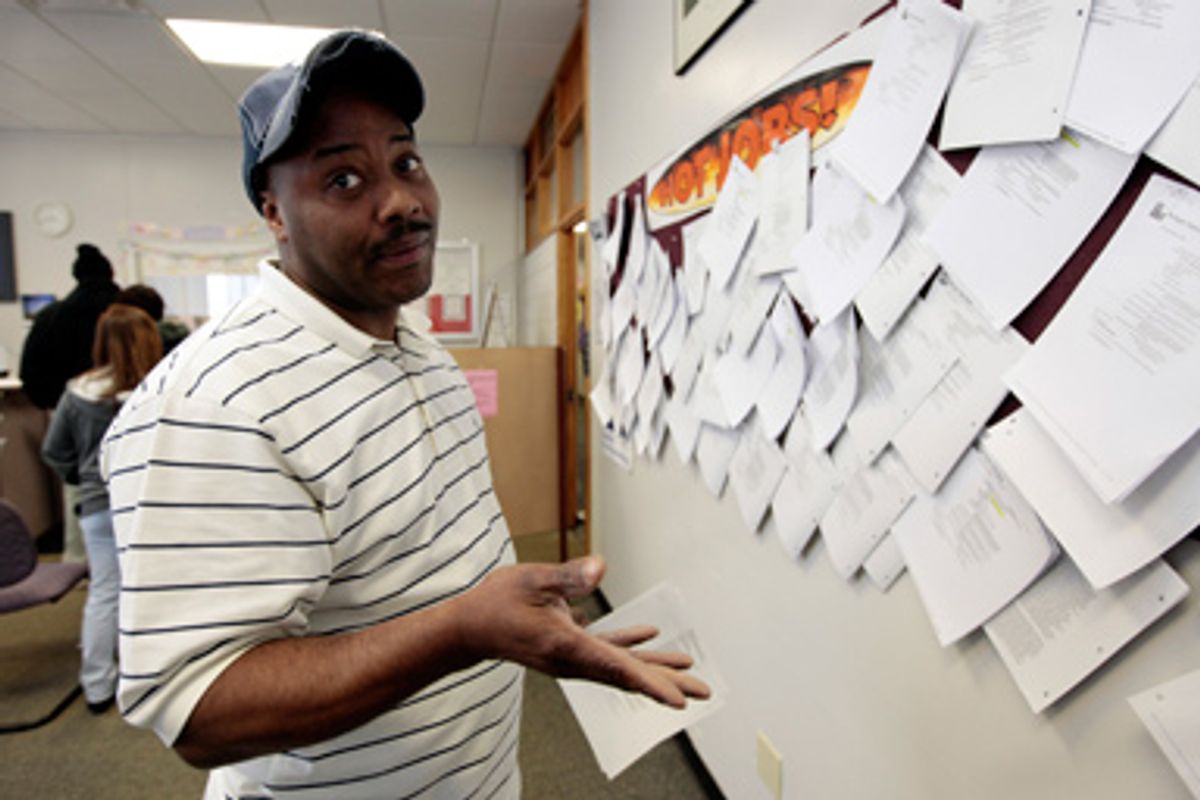 On Thursday morning, Barack Obama will mark the 100th Anniversary of the NAACP with a speech to the group's annual convention. The president should use this opportunity to note that in America's rush to declare itself "post-racial," somebody forgot to tell the economy not to discriminate.

Communities of color -- and especially black communities -- are getting hit the hardest by far in this recession. A new report on the front page of the New York Times this week showed black unemployment is rising at four times the rate of white unemployment in New York City. Overall, black unemployment in June sits at an astounding 14.7 percent, compared to a still-scary 9.5 percent nationwide. That means that more than one in every seven black Americans is actively looking for work and can't find it. Hispanics are not that far behind, with a 12.2 percent unemployment rate.

Even before the recession, black unemployment was at "recessionary levels," according to the Economic Policy Institute. EPI analyst Algernon Austin found that during the boom times of 2006, white male unemployment was just 3.9 percent while black male unemployment was more than twice as high at 9.7 percent -- worse than the current national unemployment rate that has everyone rightfully worried. That doesn't mean whites are having it easy right now -- far from it. Working-class people of all races are facing a daunting job market as unemployment continues to rise across the board.

But there's also no doubt communities of color are getting an extra helping of pain in this downturn. Our federal policy has to start targeting recovery efforts toward communities that the recession itself is already targeting. If we don't target our efforts, we risk decimating already-struggling communities and deepening a long legacy of disinvestment.

Many politicians argue that "a rising tide lifts all boats" -- meaning an improving national economy will, by definition, help all communities to thrive. Unfortunately, it's not that simple. There are countless seldom-seen barriers to communities of color getting the help they both need and deserve.

We need look no further than the $787 billion stimulus package to see what happens when federal spending is not targeted at vulnerable communities. The stimulus was supposed to be a shining example of broad-based, equal disbursement of federal dollars -- pumped from D.C. to each state so they could spend it as they deem appropriate. Ostensibly, this was supposed to mean all communities got an equal share. It has not.

Instead, we've seen states spending in exactly the kind of ways advocates warned about early on -- plenty of new highways (built by powerful construction concerns) and very little money for public transit projects or operations (which provide vital links to jobs for millions of low-income people of color) or other infrastructure needs like expanded broadband or improved water systems. And as a New York Times analysis found last week, states are spending less than half their stimulus dollars on cities, despite cities being home to more than two-thirds of the nation's population and the overwhelming majority of the nation's poor. That means for every dollar spent on a city resident, more than $2 was spent on an exurban or rural one. There are, of course, folks in desperate need of help in rural and exurban areas, too, but the sprawl-inducing highway projects that are being built do little to address the real needs of these struggling communities.

We have seen over and over again that "colorblind" spending policies too often end up benefiting white, middle-class areas the most.

Obama has always been the first to dismiss the idea that we are in a "post-racial" society. The legacy of racism remains baked-in in the way our government spends its money. That legacy doesn't always have to show itself in such overt ways as disinviting 60 black campers from a pool in Philadelphia. It can be -- and usually is -- far more subtle, like the vast discrepancy in unemployment rates between white and black men with exactly the same educational attainment or the lack of fresh food or broadband in most low-income communities.

President Obama should use his bully pulpit at the NAACP to begin to tackle the racial components of this recession. Communities of color need his leadership.