My GOP: Too old, too white to win

A Republican looks at the numbers and sees disaster ahead, unless his party figures out how to be less -- caucasian 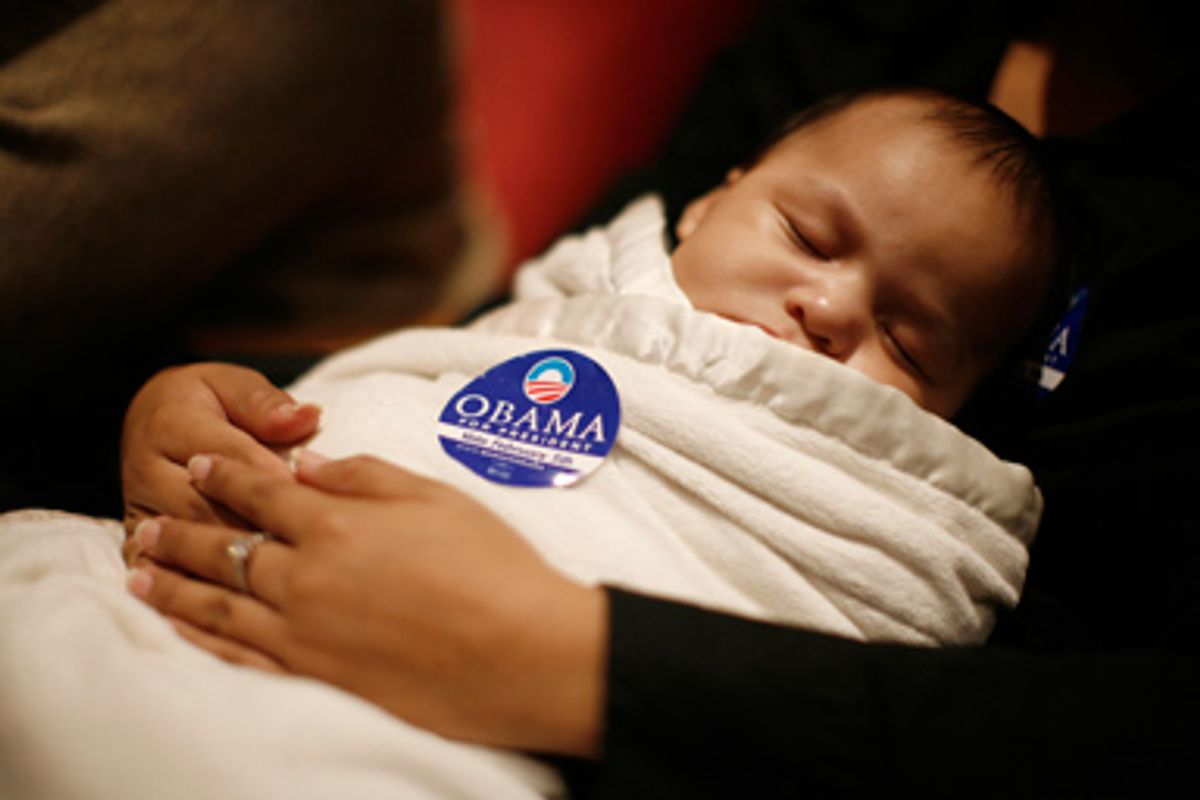 Republicans can engage in complicated studies to determine the standing of our brand. We (after all, I most certainly am a Republican) can search for policy positions that better connect us to the concerns of voters. We can do any number of things to try to change our fortunes. Until we come to grips with some fundamental math, however, the numbers simply do not add up to the GOP prevailing in a national election any time soon.

In 1976, 90 percent of the votes cast in the presidential election came from non-Hispanic whites. In 2008, John McCain won this vote by a 56-43 margin. Had John McCain run in 1976 instead of 2008, not only would he have won, but he would have won the popular vote before a single non-white vote was cast. So, despite all the chatter about the impact of Sarah Palin, despite the unpopularity of President Bush, despite the difficulty of the same party winning a third consecutive national election, despite the charisma of Barack Obama (and the love shown to him by the mainstream media), despite the financial meltdown of September, despite any other factor anyone can cite, if John McCain had been the candidate at a time when non-Hispanic whites were the overwhelming majority of the voters, he would be president now.

What happened? By 1988, the non-Hispanic white vote had shrunk to 85 percent; by 2004, it was about 77 percent; and in 2008, it had shrunk to 75 percent. Last November 13 percent of the electorate was black. Barack Obama won almost all this vote (97 percent). Between 8 and 9 percent of the electorate was Hispanic, a demographic Obama won by a 2-to-1 margin (compared to the 40 percent Bush had won in 2004). That means before the first non-Hispanic white vote was counted, the score was 19-3 for Obama. When you think about the numbers, it's not that surprising that this past Thursday the first black president addressed the centennial convention of the NAACP. A signal achievement, certainly, an unprecedented event, but not a mathematical shock.

But wait -- there's more statistical gloom for Republicans. Just about 18 percent of the vote was cast by voters between the ages of 18 and 30. As a percentage of the overall vote, this did not constitute any sort of meaningful increase -- despite what the pundits were saying. However, since total turnout was up, it did mean more young voters went to the polls. Worse, for Republicans, these voters went to Obama by a margin of 2-to-1. Chances are that now they've got the voting habit, a lot of them will keep turning up on Election Day, and keep voting Democratic.

Then, you have increased support for Obama and other Democrats from cities and close-in suburbs. So, in the major metropolitan areas -- where diversity is nearly a religion -- you have strong support for Obama from virtually every quarter. Guess what else is located in these urban locations? For starters, you have the major media outlets. Is it any wonder that coverage of the election took on the tone of Obama's election being a virtual certainty? In these locations, Obama was running so strong, it was hard for those observing to see how he could lose. John McCain's strength came from locations that generally were not the subject of much attention by the national media.

The marketing department of the Republican Party is consumed with the idea of "brand." How about we actually look at ourselves as an ordinary, non-political business, selling a commercial product? Who would ever start down a path that essentially said that we will be strong in all the declining markets while we let our only significant competition be strong among the emerging and growing markets? Unless North Dakota suddenly gets 54 electoral votes, would someone please show me another way for Republicans to realistically conclude we can compete at the national level?

To make matters even worse, our weakness among minority voters is somewhat masked when it comes to elections that are not national. How can that be? Thanks to redistricting, and the legal imperative to give emphasis to "community of interests," these minority voters tend to be jammed into congressional districts where they are the overwhelming majority. That means the other districts tend to be more white in nature, and thus more friendly territory for Republicans. Then, at the level of the Senate, the reality is that Utah and Wyoming get the same number of senators as do California and New York.

What this means is that when it comes to an issue like immigration reform, the pressure on Republicans who actually have been elected to office is more often to favor a position that is unattractive to minority voters. If they were to take a different position, they might find themselves facing a primary challenger supported by the party's activist base. So, at the expense of any long-term perspective, the Republican Party is likely to be responsive to the sentiment of the people responsible for them serving at this very moment.

This tension between what the base wants and what the party needs to attract non-white voters is hardly a new concern. In 1960, Richard Nixon did pretty well among black voters. However, after Barry Goldwater opposed civil rights legislation, Republicans never recovered. Some of the very same Democrats who had uttered some of the most vile, racist statements in the history of Congress became the beneficiaries of a block vote for any and all Democrats.

California is a textbook example of the pitfalls of this kind of short-term political thinking. For many years, California had been good territory for Republicans. After all, it was the home state of not only Richard Nixon but also of Ronald Reagan. Then, in order to secure reelection in the 1990s to the office of governor, Pete Wilson decided to take a strong stand on the issue of immigration. Yes, he won that year. However, after that point in time, Hispanics in the state overwhelmingly supported Democrats, and Republicans have suffered ever since. And as goes California, so goes the nation. A recent poll shows Republicans, at the national level, are viewed favorably by fewer than 10 percent of all Hispanics. The word for this is "disaster."

Perhaps we are seeing the start of a level of sensitivity to how the Republican label is perceived among voters of Latin descent. As one observes the Senate Judiciary Committee hearings on the nomination of Judge Sonia Sotomayor to become the next Supreme Court Justice, it is clear Republicans on the committee are determined to be respectful, even admiring of what it means for her to be nominated. To be sure, some of the questions have been tough. Nevertheless, all seem to be aware that anything said or done that even remotely could be construed as not appreciating how important all of this is to the Hispanic community is simply unacceptable. This is certainly an improvement in what has tended to be the case in the past.

Unless and until Republicans can demonstrate an ability to attract more support from minority voters, from younger voters, from voters living in urban areas, it seems to this die-hard Republican that we are kidding ourselves if we think the 2008 election was just a speed bump on our road to a lasting majority. Looking at nothing more than the math, it appears to me our challenge is far more daunting.

I don't pretend to have some solution in a bottle that will change things for Republicans. I do know debates about whether conservatives or moderates need more of a voice in the party strike me as completely missing the point. The debate, for now, should begin and end with asking and answering how it is that we can remain true to our basic principles and grow among these key voter groups that are needed to win elections. Failure to do so can only lead to more defeats.

Bill Greener is a founding partner of the political consultancy Greener and Hook. He served in both the Ford and Reagan administrations and as convention manager for the 1996 Republican National Convention. He also teaches at the George Washington University Graduate School of Political Management.