Why we say yes to drugs

Resistance to mind-altering substances is futile, according to a new "Secret History of Getting High in America" 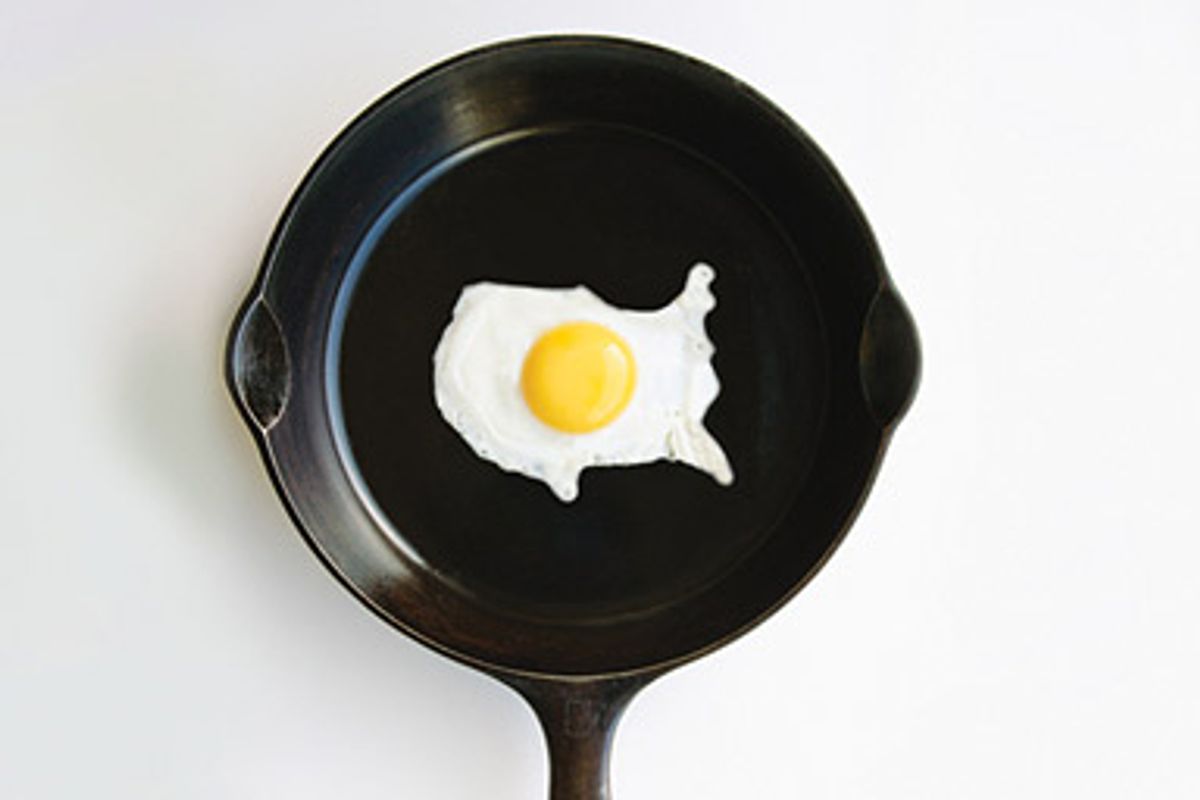 This is Your Country on Drugs
--

Not long ago, I was talking with a couple of friends who are about a decade younger than I am. We got onto the subject of recreational drugs and how my friends had recently sworn off Ecstasy. "I know a guy who used to love it, and he's quitting, too," one of them explained. "He's learned a lot about it and says it's just too hard on your body." I remarked that since Ecstasy is the sort of drug most people take only very occasionally, it probably wasn't as dangerous as something like cocaine, which can be addictive, expensive and lethal. "Oh, cocaine's not that bad," said my friend, looking puzzled and leaving me surprised. Hadn't he ever worked for someone who'd gotten so tweaked on coke that he burned out his septum, emptied his bank account and triggered a heart attack? Hasn't every journalist worked with someone like that?

Ryan Grim would understand this disconnect perfectly. One of the theses of his new book, "This is Your Country on Drugs: The Secret History of Getting High in America" -- a cornucopia of unconventional wisdom about our relationship to mind-altering substances -- is that the popularity of drugs waxes and wanes according to a complex sum of factors. One of those factors is the "perceived risk" of using a particular chemical, which also fluctuates. There's a tendency to idealize new drugs, as the Boston Medical and Surgical Journal did with a recently isolated narcotic in 1900. "There's no danger of acquiring a habit," it assured its readers about the drug that had just emerged from the labs of the aspirin manufacturer, Bayer. They named it heroin.

Even when we ought to know better, we don't. "It takes about seven years," Grim writes, "for folks to realize what's wrong with any given drug. It slips away, only to return again as if it were new." I came of age professionally at a time when older journalists and editors were wrecking themselves on cocaine right and left; as a result, I still think of the drug as equal parts perilous and pathetic, as well as hopelessly uncool. My friend, no doubt, came up during a coke lull.

A political reporter who currently works at the Huffington Post, Grim wrote a 2004 article for Slate inspired by a curious observation: LSD, which had been "a fixture of my social scene since the early '90s," seemed to have vanished from that scene. No one he knew was taking it or selling it, and when he approached a drugs-policy researcher for some hard data, they discovered that according to several metrics, acid use was at "an historic low: 3.5 percent." By 2003, it was down to 1.9 percent. Why?

It wasn't just that LSD had gone out of style, although it had, somewhat. Grim found evidence of a perfect storm of causes for the decline. In 2000, the DEA had arrested a man named William Pickard, thought to be the manufacturer of as much as 95 percent of the available acid in the U.S. The Grateful Dead, whose concerts provided an opportunity for suppliers and users to connect and network, had stopped touring after the 1995 death of Jerry Garcia, and Phish, a jam band that had stepped in to fill the gap, also stopped touring by the end of 2000. The rave scene began to fade away under pressure from authorities who threatened to arrest organizers for drug offenses committed at their events.

But if Grim has learned anything from his forays into the tangled world of drug laws (he once worked for the Marijuana Policy Project, which lobbies for the repeal of pot prohibition), it's that the American passion for getting high turns enforcement-centered strategies into a vast game of Whack-a-Mole. "Policies enacted to counter other drugs -- marijuana and cocaine, for example -- have ended up encouraging the meth trade, as have laws against meth itself," he writes. Crackdowns on pot smuggled from Mexico during the 1970s caused growers, dealers and users to turn to heroin, meth and especially cocaine, the last of which was brought in from Colombia via the Caribbean and Miami. When federal authorities finally got around to draining the swamp of crime and corruption in Miami (where one-fifth of all real estate transactions were paid for in cash), coke smuggling migrated to Mexico, and when attacked there, it scattered throughout the region, "creating the cartel structure that exists today." This year, the National Drug Threat Assessment has described Mexican cartels as "the greatest organized crime threat to the United States," whose violence has spilled over the border and whose influence "over domestic drug trafficking is unrivaled."

Grim has a knack for digging up facts and crunching statistics to get unexpected results. The meth "epidemic" that has recently inspired so much media alarm is already in decline, while crack use, never as pervasive as it was depicted in the 1980s, has remained fairly steady since then. Today's kids aren't smoking much pot because pot is a "social" drug, shared among peers who gather in parking lots and other hangouts; teens have less unstructured time now and tend to socialize online. They still get high, only on prescription drugs pilfered from adults or ordered off the Internet. "There's no social ritual involved," he observes, "just a glass of water and a pill," which "fits well into a solitary afternoon."

There's more. Early American settlers drank like fish, even the Puritans (though, as Grim fails to note, this was likely a habit transferred from Europe, where the water in many communities wasn't potable). In the 19th century, the heyday of temperance campaigns, it was more socially acceptable to consume opium than alcohol, and by the end of the 1900s, America was a "pharmacopoeia utopia" in which coke, heroin and morphine were all readily available, either with a doctor's prescription or in patent medicines and products like Coca-Cola, once a cocaine-containing beverage marketed as "a substitute for alcohol." Traditionally, attempts to regulate or prohibit drugs in America have come from the left rather than the right; only with the advent of the counterculture did this change.

Some of Grim's arguments are familiar, but with a twist. By now, most informed people know that anti-drug education and P.R. campaigns directed at children don't work, but Grim has noted several studies indicating that they may actually foster experimentation. He sees the mini-boom in drug use among 10th graders in the late '90s as caused by a confluence of the "inner child" therapy boom exhorting parents to encourage children's curiosity and programs like D.A.R.E. (Drug Abuse Resistance Education), which inadvertently directed that curiosity toward exotic chemicals. Despite ample proof of its ineffectiveness, D.A.R.E. continues to be used in three-quarters of all American school districts on some 25 million children. (President Obama even proclaimed April 8 "National D.A.R.E. Day" in honor of the organization's "important work.") Grim thinks that D.A.R.E. and similarly wasteful programs persist simply because they relieve parents from the duty of having awkward (and possibly "hypocritical") conversations with their kids about drugs. Also because no one knows what else to do.

Even less excusable in Grim's eyes is the predominance of law enforcement strategies in America's disastrous war on drugs, initiated by the Reagan administration. Drug courts, in which offenders are directed to court-monitored treatment programs instead of into prison, are, according to Grim, both cheaper and more successful. Yet even politicians inclined to support a treatment-oriented approach to diminishing the American appetite for illegal drugs have opted to emphasize enforcement in order to position themselves as "tough" on crime.

For just this reason, President Clinton replaced his first, reform-minded drug czar, Lee Brown, with retired Gen. Barry McCaffrey, who squandered billions on a scandal-ridden media campaign (planting secret anti-drug messages in prime-time TV dramas) and combating the medical marijuana movement, which is supported by a majority of Americans. Worse yet, overseas enforcement campaigns lead to horrific blowback. Grim points out that aggressive attacks on growers and suppliers cause centralization of the drug trade (only big organizations can afford the losses) and this in turn leads to corruption, as cartel leaders parlay their fortunes into political influence. Not only are we pissing away our own resources on ineffectual enforcement efforts, we have "brought the Mexican government to the brink of collapse, making the prospect of a failed state on America's southern border a very real possibility."

For Grim, most of these mistakes have roots in an elementary error, the inability to accept that "altering one's consciousness is a fundamental human desire." The craving to be more relaxed or more alert, more outgoing or more reflective, happier or deeper or even just sillier and less bored -- in one form other another, this drive has always been and always will be with us, though many of us refuse to admit it. As a result, our political response to drug problems tends to be blinkered. "In reality, there's no such thing as drug policy," Grim writes. "As currently understood and implemented, drug policy attempts to isolate a phenomenon that can't be taken in isolation. Economic policy is drug policy. Healthcare policy is drug policy. Foreign policy, too, is drug policy. When approached in isolation, drug policy almost always backfires, because it doesn't take into account the powerful economic, social and cultural forces that also determine how and why Americans get high."

Yet a simplistic call for legalization fails to take into account the fact that almost all drugs can be very dangerous, and that the impulse to control them may run as deep as the desire to enjoy them. People who trust themselves to use drugs wisely don't necessarily want their kids, or their irresponsible neighbors, or their troubled relatives to enjoy unfettered access to previously controlled substances. For that reason, Grim -- who exhibits a distinct preference for hallucinogens and is prone to idealizing the "psychonauts" who use them to "expand consciousness" -- stops short of calling for the repeal of all drug prohibitions, for the most part, apparently, because he thinks it just won't last. "What would happen if drugs were legalized?" he asks, referring to the "pharmacopoeia utopia" of the late 1800s. "Well, it happened. And history suggests that if we ever legalize them again, it won't be long before we ban them all over again."

"Realism" seems to be the most Grim can bring himself to hope for, which is why he applauds cable TV series like "Weeds," "Breaking Bad" and "The Wire" for their nuanced depictions of the drug trade and the people who ply it. The library-like Web site Erowid.com emerges as one of the few real heroes in "This Is Your Country on Drugs," due to its curators' fierce commitment to objectively and thoroughly substantiating the vast amounts of information -- positive and negative -- they present about virtually every drug under the sun. A little realism would certainly help with regard to cocaine, whose "perceived risk" is rapidly shrinking in my own (admittedly highly anecdotal) experience. In the final pages of the book, Grim remarks that his own observations suggest that "coke's next honeymoon could be right around the corner." Sounds prescient, but not more so than his world-weary conclusion that "America has shown just about zero capacity to learn from its long and complicated history with drugs."