My life as a "Guiding Light" extra

I'm not an orderly, but I play one on TV. Until September, that is, when daytime's first soap goes off the air

By Raul A. Reyes 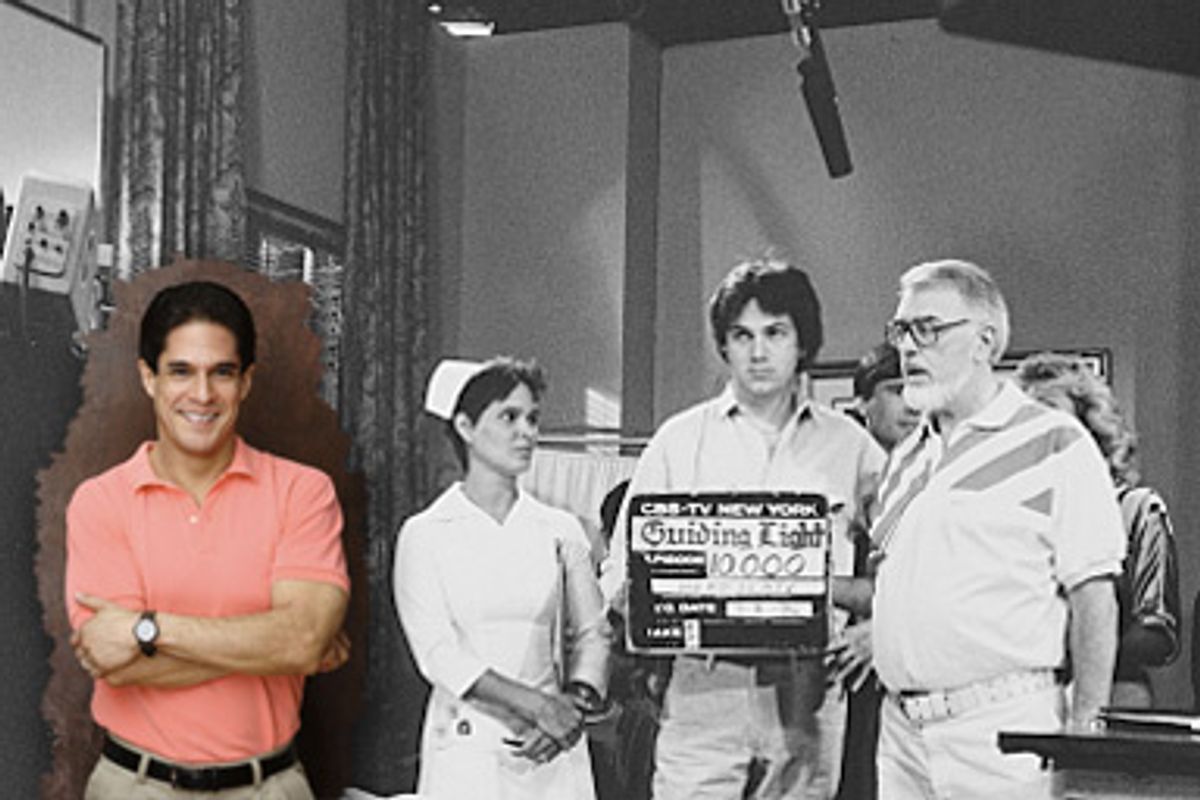 Like many other Americans, I was recently notified that I would soon be out of a job. I'm a long-term employee at Cedars Hospital in Springfield. I work with Dr. Rick Bauer, who went to medical school for all of three weeks, and my boss is Nurse Lillian Raines, who doesn't like talking about the scandalous affair she had years ago. In our hospital, test results are routinely switched and there is a direct correlation between patient mortality and contract renegotiations.

I'm not an orderly, but I play one on TV.

I'm on "Guiding Light," although not for much longer. Back in April, CBS announced that it was not renewing our show, the longest-running scripted program on television. The final broadcast will be Sept. 18.

I wish I could say that I was surprised to hear the news. Unfortunately, "Guiding Light" has lately been the least-watched soap opera. According to Variety, this season the show has averaged 2.2 million viewers. By comparison the top-ranked daytime drama, "The Young & the Restless," averages over 5 million.

If you've watched "Guiding Light" anytime in the last 25 years or so, you've probably seen me. Most times, I had no lines. But that was me, rushing around in my scrubs with a manila folder and a purposeful look. That was me, calling out "Stat!" during crises and nodding at whatever Nurse Lillian said. That was me, pushing gurneys down miles of hallways.

I've been fortunate to have "Guiding Light" in my life for a long time. In a sense I am no different from the millions of viewers who have followed this program over its storied 72-year history. "The Guiding Light," as it was originally called, holds the distinction of being the very first soap opera. It began as a 15-minute radio broadcast in 1937 and moved to television in 1952.

I came to "Guiding Light" the usual way -- mailing in a picture and résumé and then reporting at the studio once the casting director called. It was 1983, and the soaps were still enjoying their heyday. "Dynasty" was a huge prime-time hit, "All My Children's" Erica Kane was in full vixen mode, and "General Hospital's" Luke and Laura had become household names. At the time, "Guiding Light" hired hundreds of supporting players in addition to their contract cast. I would work for a few days at a time, or a week, depending on whether any main characters were in the hospital. I was always pleased when someone slipped into a coma; it was great for my income.

While my performing ambitions waxed and waned over the years, I somehow managed to hang onto my little job at the soap opera factory. I wasn't the only one, either. There was Lynn, the waitress at Company restaurant; Alvin, the cop at the police station; and Darlene, the nurse and my fellow employee at Cedars Hospital. We're just a few of the regular-but-not-always-recognizable denizens of the fictional town of Springfield.

Away from "Guiding Light," I have been a freelance writer, a lawyer and a TV reporter. Yet no matter what else I was doing in my life, whenever the casting department called, I would say, "Yes, I'll be there." It's hard to turn down a job in which, thanks to the miracle of makeup, I looked better when I left than I did when I arrived. I enjoyed catching up with everyone from the security guard to the boom guy to the show's leading lady. "Guiding Light" has been my Cheers, a place where everyone knows my name.

For me, the show has been not only a wonderful part-time job but also an ongoing convergence of reality and fiction. In real life, I can remember taking an HIV test back in the late 1980s and then waiting an agonizing two weeks for the results. During this same time, I attended an on-screen funeral. Overcome with thoughts of my own mortality, I cried all the way through the scenes. I was jolted back to reality when a director told me that my breakdown was great and asked if I could do it again in a close-up.

This year, my character went to Springfield High School's 25th reunion, where I was taken aback to realize that I had indeed known some of my colleagues for a quarter-century. I felt just as sentimental and bittersweet with them, dancing to "Time After Time" surrounded by three cameras and a phalanx of producers, as I had at my own high school reunion.

I've acted on other TV shows and performed in theater productions from Lincoln Center to Japan. Yet I bonded with "Guiding Light" for the same reason that generations of daytime audiences have -- because it feels like home. True, life in Springfield is complicated. In March I was waiting to wheel Emmy-winner Kim Zimmer into the E.R. to give birth. (Never mind that her character Reva was in menopause and also undergoing chemotherapy and radiation. Details!) She eyed me thoughtfully and then remarked, "You know, I think I've had an affair with every man on this show … except you!"

But kidding aside, the cancellation of "Guiding Light" may mark the beginning of the end of an entire genre. Soaps have been in a slow decline for more than a decade, hobbled by the rise of talk/reality shows and the myriad options offered by Internet, cable and TiVo. The days of the three-network monopoly is long over. Those stuck at home during the day and casting about for distraction simply have much, much more to choose from. I knew things weren't looking good for us the time I mentioned the show in passing to a friend and her response was, "Oh, 'Guiding Light'! Is that still on?" I laughed, but my heart broke a little too.

For now, I think the "Guiding Light" family is working its way through the five stages of grief. For many cast and crew members, it will be the end of a job they've known all their lives. For the fans, it will be time to bid farewell to the Bauers, the Coopers and the Spauldings. I console myself by considering "Guiding Light's" rich legacy. In the 1960s, it was the first show to introduce African-Americans in lead roles. The show has done groundbreaking stories on breast cancer and HIV/AIDS awareness.

None of this makes saying goodbye any easier. In the soap business, we've weathered amnesia, shooting sprees and temporary blindness, but the fact that most people no longer have an hour in the day for their stories? Well, that's killed us.

Maybe it was inevitable that "Guiding Light" would end. In a world where "Tune in tomorrow" has long been a mantra, however, it's hard to imagine there being no tomorrow. I'm still not sure how I'm going to handle it. But I am certain of two things. "Guiding Light" will go out with class. And this is a soap opera, so there will be tears.

By Raul A. Reyes

MORE FROM Raul A. Reyes