To win his healthcare plan, Obama must define it

The president is belatedly pitching his reform ideas to the public, bypassing D.C. -- but what is he selling? 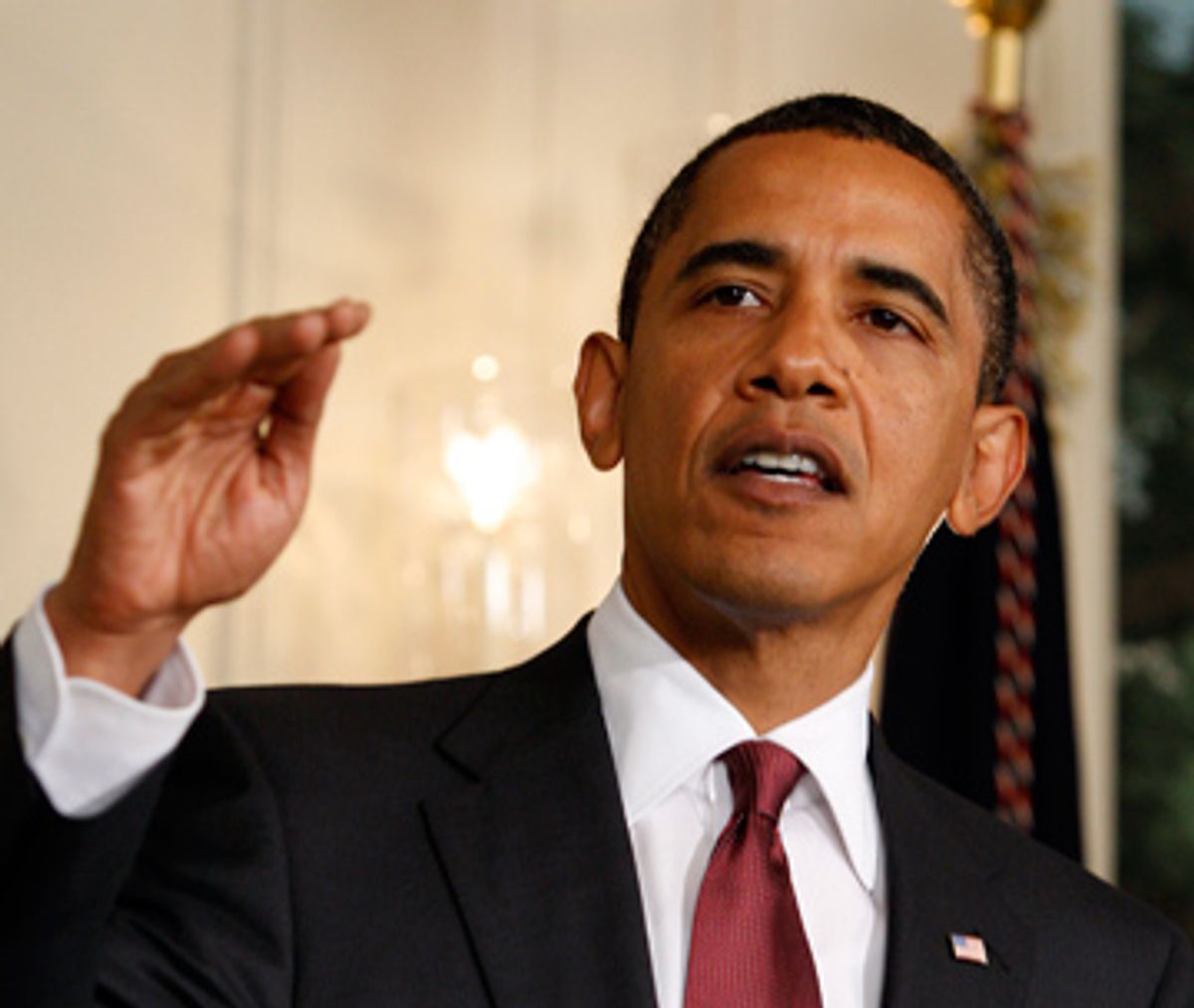 I think of myself as a policy wonk. And yet on the biggest policy issue of the day, healthcare reform, I've been as silent as Michael Steele, who surreally confessed Monday that he can call Obama's health plan "socialism" but doesn't need to master the details because he does politics, not policy.

Steele's idiocy shamed me out of my silence. To be fair (to myself) I'm proud of Robert Reich's work in our pages, and Mike Madden's and Alex Koppelman's, and Michael Lind's great piece Tuesday lays out Obama's and the Democrats' choices clearly (and pessimistically, in terms of where they'll likely land). But I still think it's important to focus in my own writing on the economic, social and political stakes involved in Obama's passing the kind of comprehensive healthcare reform he's been talking about.

Except: I'm not entirely sure what he's been talking about.

I know Obama has a nearly impossible task, dealing with Blue Dog Democrats and crazy Republicans -- from Wild Bill Kristol, chickenhawk, telling the GOP to "go for the kill" and do whatever it takes to defeat Obama on healthcare, to Sen. Jim DeMint's similarly sinister prediction that if Republicans defeat Obama on healthcare "it will break him." GOP zealots are clearly more interested in killing or breaking President Obama -- politically, of course; I don't think they are assassins, personally -- than helping Americans get the healthcare they need. It's a little creepy, but once you've watched a crazy "birther" hector moderate Republican Mike Castle about Obama's birth certificate and other related delusions -- well, then nothing Republicans do can surprise you.

Then there's the media. According to the Hollywood Reporter, Obama had to move his Wednesday press conference, which is expected to zero in on the importance of serious health care reform, an hour earlier, because three of four national networks balked at preempting their top-rated shows. According to THR: "Fox declined to air the press conference outright. NBC and ABC fell into line late Monday after the White House shifted the event’s time from the previously announced 9 p.m. to the lesser-watched hour of 8 p.m." What shows were they worried about? "America's Got Talent," "So You Think You Can Dance," "Wipeout" and "I Survived a Japanese Game Show!"

Now, I love my reality TV, but that's a disturbing, indelible picture of how skewed our media priorities are. Maybe Obama should have pitched his press conference to the networks as "So You Think You Have Health Insurance!  Or "Wipeout: Half of bankrupt Americans got there because of a healthcare crisis – and I'm one of them!"

So I'm clear about why this is a tough fight for Obama. But I think he may be making it harder than it needs to be. I realize it's difficult to define when still playing politics -- necessarily -- but I really want to know his bottom line. I know he wants to cover the uninsured, bring down the growth rate in health costs, in part by increasing preventive medicine and using evidence-based outcome studies to determine what should and shouldn't be paid for. I know he wants a public option. But what really matters in his plan? What will he fight for? He's seemed strong on support for a public option -- but Rahm Emanuel and others have gone public suggesting that's negotiable. He doesn't want to break a campaign promise not to tax healthcare benefits, which is understandable, but he hasn't fully come out for a surcharge on the country's wealthiest earners, either -- and yet he's on record saying he doesn't want his plan to bulk up the deficit to pay for the reform he's pushing. He's expressed doubt about Sen. Kent Conrad's toothless "co-op" proposal, in place of a public plan, but he hasn't ruled out going along with it.

Robert Reich has written about Obama's success at getting industry leaders on board for reform -- which seems like a great achievement, except it has come at the expense of getting major cost savings and meaningful changes to the insurance industry's wasteful stranglehold on the system. On MSNBC's "Hardbal"l Monday Chuck Todd said the fact that industry has contributed more money to pass Obama's plan than to oppose it was a sign of its strength, but I have a nagging suspicion it could be a sign of its weakness.

Of course, Obama is a model of certainty and persuasion compared to the eternally lame congressional Democrats. Even the Progressive Caucus is being squirrelly on what it supports: Progressive Caucus whip Diane Watson told the Huffington Post's Ryan Grim that she had a list of 50 Congress members who'd been "whipped" into supporting a public option; Firedoglake's Jane Hamsher found that number was squishier when one probed exactly what they'd committed to. Some alleged public option supporters said they'd consider Conrad's co-op a form of public option, which represents a misunderstanding of the term.

I believe in compromise and some form of incrementalism, most of the time, as the way forward on social policy issues. But if Obama can't come up with a plan to cut wasteful health-industry spending while insuring more Americans, he will lose -- personally, politically, morally -- even if he gets a "compromise" bill passed.

So: I understand why Obama isn't defining his bottom line -- this is high-stakes negotiating, with all the poker-faced bidding and bluffing that goes along with it, and he's still trying to rope in members of his own party, sadly. Still, it's going to be hard to marshal the public will he needs to get beyond the GOP and the timid Blue Dogs without laying out his core principles. He's getting tougher this week, and that's welcome, if a little late. Obama's tardy health-reform push reminds me a little of his better-late-than-never effort defining and selling his stimulus bill – after Republicans and, again, faux-Dems like Sen. Ben "This is class warfare!" Nelson were marshaling public opinion against it. And I hope the result isn't the same.

Let's review. Yes, the stimulus passed, but it was smaller and less job-intensive than liberal Democrats and economists wanted it to be. That's not a vain matter of keeping score or "we told you so." By his own political calculus, this is now Obama's economy, and he's being blamed for Bush-era troubles unfairly, but fairly for his own: The slowness of the (probably inadequate) stimulus, and the scandals of a banking rescue plan that Goldman Sachs, once again, gamed and profited from.

I think all the hand-wringing about Obama's slight drop in the polls is a side effect of a shallow, conflict-driven, 24/7 cable news cycle, not a sign of real weakness for Obama. But it's also true he doesn't have forever to pass healthcare -- and he knows it. His press conference Wednesday and town hall Thursday are part of a better-late-than-never pitch to put his overall approval rating and his popularity with his base behind this important priority.

But for the pitch to work, we need to know more about exactly what he's fighting for. It's become a cliché that the Clintons left Congress out of their health-reform plans, while Obama let Congress leave him out of his. Neither is true, but the perception alone is a danger. Obama needs to tell Americans what he's fighting for. When he does that, they back him. When he doesn't, he stumbles. Let's hope he lays out something worth fighting for on Wednesday and Thursday.