"American Idol" should lose Abdul once and for all 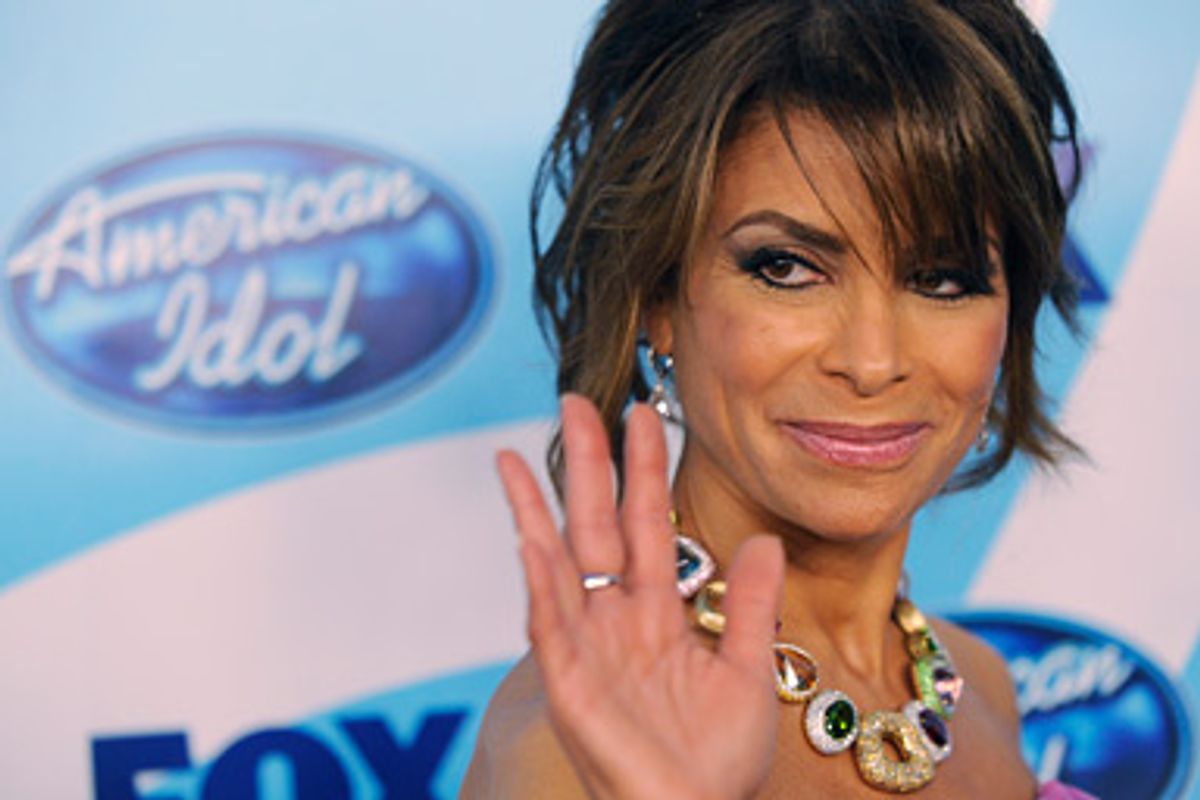 Having watched "American Idol" since its first season, I am not appalled over the news that Paula Abdul might not be invited back to the show this fall.

In fact, I would love for Paula Abdul to leave the show. I would love for her to walk straight out the door and keep walking until she reaches the edge of a high cliff that leads into a horrible, swirling void (think "Indiana Jones and the Temple of Doom"), that she might tumble downward and disappear forever and ever, amen.

I don't want her to die or anything. I'd just really prefer that she go away and never show up in front of another camera again.

Because Paula Abdul is exactly the sort of person who should never, ever have been invited to appear on television in the first place. Sadly, in this era of pointing cameras at people's faces and asking them to tell us their thoughts -- on reality shows, on news and magazine sites, on YouTube, on those "Top 10 Celebrity Jackasses" shows on VH1 and E! -- we've become accustomed to hearing boring media professionals and demi-celebrities without thoughts inside their big, empty heads prattle on and on, trying to form a thought as we're lulled to sleep by the sound of their endless chatter. "What's the deal with Britney, anyway?" they say, or "Seth Rogen has had a pretty incredible year," or "That dress looks all wrong on her. What was she thinking?" They possess the wisdom and insights of 10-year-old girls, but there they are, on-screen, in front of us, making pronouncements with the bluster and smugness of news anchors or renowned philosophers or world leaders.

Even as "American Idol" has grown more and more insipid and idiotic and worthless since its first season, even when the only reason to watch has always been the one or two inspired performers per season -- the Adam Lamberts and the Fantasias -- one thing has remained the same: Paula Abdul. She is exactly as disconnected and vague and insecure as she was when the show premiered back in 2002. Abdul has always seemed to struggle just to form sentences, let alone to add something worthwhile to the discussion.

This is why I've been fast-forwarding through her inane, repetitive comments from the judge's table as long as I can remember. Yes, Abdul's remarks rank up there with pharmaceutical drug commercials and disturbing horror movie trailers.

Kara DioGuardi doesn't add much to the mix either. Mostly we're waiting to hear from Simon Cowell, because we want him to mirror what we're thinking, something along the lines of "Those were the wailings of a castrato on meth." Or "You are exactly as soulful and poignant as an animated Disney princess." Or "Enormous humans shouldn't wear shiny purple clothing, because they look like grapes." For a show populated by choir geeks trying to mimic Celine Dion and largely failing, Cowell's remarks are suitably scornful.

But Paula Abdul is a disaster in slow motion. Every time the camera turns its focus to her, she smiles weakly and looks embarrassed, then searches wildly for something to say. She stumbles on her words, giggles nervously, and trails off halfway mid-sentence, or is interrupted by an impatient Cowell. It's like handing a 2-year-old a Mr. Microphone. Abdul seems afraid to say what she really thinks -- or she doesn't know what she really thinks, or she has trouble thinking in general. Even after all these years, the camera seems to make her nervous. She titters, and blinks, and mumbles something incoherent about loving the performer in question, without making any mention of his or her actual performance.

There have been substance abuse allegations. Cowell appears to openly despise her. She seems stressed out and unhappy all the time. What's the point in prolonging her misery -- and ours?

"She's hurt. She's angry," said Abdul's manager, David Sonenberg, in an interview with the Los Angeles Times. He called the delays in renewing her contract "rude" and "disrespectful" and said that "we're going to be considering everything, including some kind of competition show."

Yes, Abdul has so many different paths to consider. After all, she was a Lakers girl and a choreographer, and then she became a pop star (who couldn't sing) and after that she was a judge (who had no real opinions and nothing to say). Why, Abdul could probably be a lawyer (who isn't familiar with the law) or a doctor (who has no knowledge of the human body) or a professor of some kind (who doesn't have a college degree and has no real field of knowledge).

Abdul can do anything she fixes her nervous, jittery gaze on. As Abdul herself might say, Paula, you are just awesome and I love you sooo much and you should just ... really ... go for it! I just love you, that's all.

So, Paula, go ahead and explore any one of your many, many talents, just please do it far away from the camera's eye. The camera created you, it made you needy and confused, and my guess is that you won't be able to collect your thoughts until you escape its penetrating gaze once and for all. We won't miss you, exactly, but we'll certainly miss the way Simon Cowell used to roll his eyes at you. You're just ... really ... We just love you, that's all.