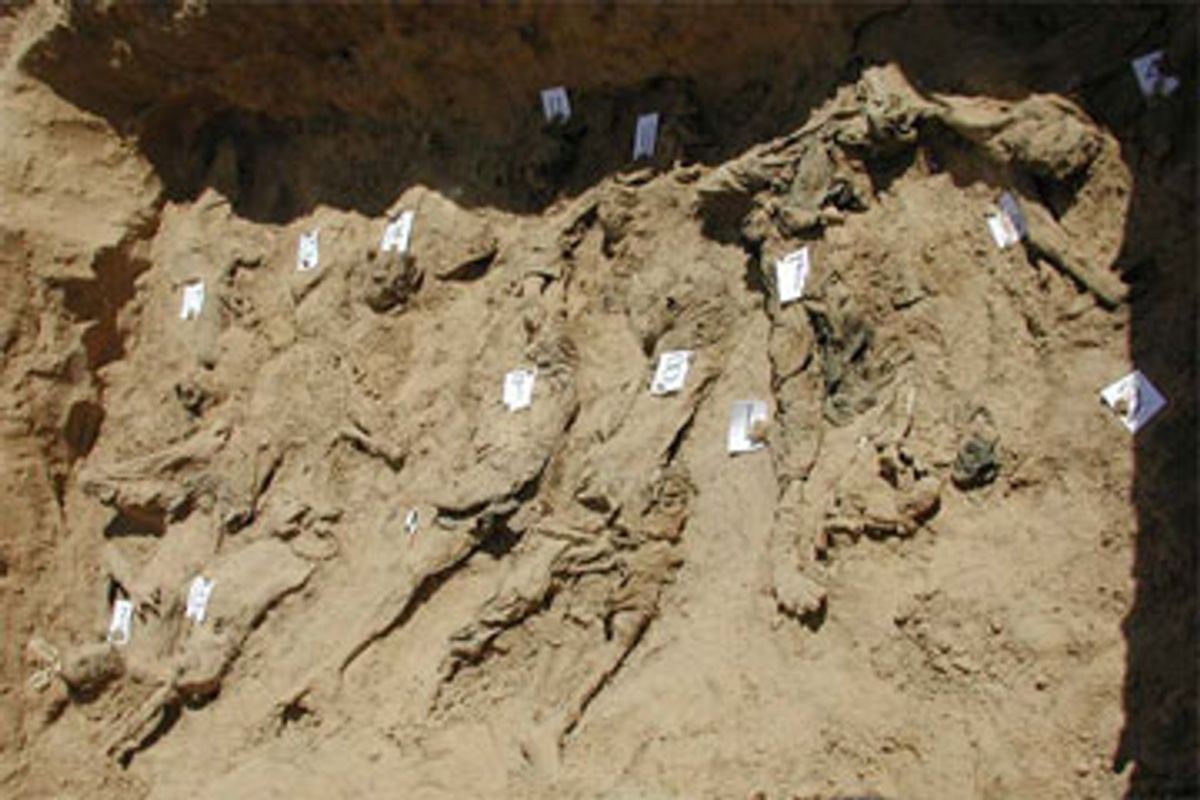 It has long been known that soon after the American invasion of Afghanistan in 2001, hundreds or thousands of Taliban prisoners who had surrendered in the city of Kunduz were herded into metal containers and suffocated or shot, allegedly under orders from an Afghan warlord. As Newsweek reported in August 2002, the bodies were then piled into mass graves in Dasht-e-Leili, Afghanistan, near Shibarghan.

Earlier this month, Pulitzer Prize-winning New York Times reporter James Risen advanced the story, revealing that the United States had resisted any war crimes investigation into the massacre, despite learning from Dell Spry, the lead FBI agent at Guantánamo Bay following the U.S. invasion of Afghanistan, that many Afghan detainees were telling similar stories of a mass killing. Spry directed interviews of detainees by FBI agents at Guantánamo Bay, and compiled allegations made by the detainees.

But what the Times did not report was that many of those same detainees also alleged to Spry's interviewers that U.S. personnel were present during the massacre, a potentially explosive allegation that, if true, might further explain American resistance to a war crimes probe of the deaths. In an exclusive interview, Spry  told Salon that he informed Risen about the additional allegation that U.S. forces were present. Risen confirmed to Salon that Spry told him of the allegations, but said he did not publish them, in part, because he didn't believe them.

In late 2001, according to initial media reports on the massacre, Afghan warlord Gen. Abdul Rashid Dostum ordered hundreds and perhaps thousands of Taliban prisoners who had surrendered in the city of Kunduz into metal shipping containers. They were given little food and water over a three-day period and transported to a prison outside Shibarghan. They licked perspiration off one another to stay alive. Many suffocated. Others died when guards fired pell-mell into the containers. Murder by metal shipping container is apparently the mass killing technique of choice among some warlords in Afghanistan.

Risen's story in the Times earlier this month said the slaughter "may have been the most significant mass killing in Afghanistan after the 2001 American-led invasion." The Times added that American officials resisted a war crimes investigation because the warlord who allegedly orchestrated the mass killing, Dostum, was a paid CIA asset who had worked closely with U.S. Special Forces. At the time of the killings, Dostum was working hand-in-glove with soldiers from the Army's 5th Special Forces Group. During that phase of the war in Afghanistan, small numbers of Special Forces soldiers typically accompanied much larger numbers of U.S.-allied Northern Alliance forces on the battlefield.

That article showed that Spry assembled accounts from roughly 10 prisoners who said they had survived the massacre and later ended up at Guantánamo. Those prisoners described being "stacked like cordwood" in the shipping containers while the mass killing occurred.

The paper showed that Spry sent the information up his chain of command. A senior FBI official halted a subsequent investigation. The military also evinced little interest. Former Deputy Secretary of Defense Paul Wolfowitz apparently told another defense official at the time that the United States wasn't going to go after Dostum for the deaths, because he was a valuable asset.

What the Times did not say was that these Guantánamo prisoners also said that U.S. personnel were present during the massacre. "The allegation was that U.S. forces were present while Dostum's troops were herding these people into these containers," Spry, now retired from the FBI and working as an FBI consultant, told Salon. "They were out rounding up alleged Taliban and insurgent folks."

Spry said that at the time of the interviews not long after the invasion of Afghanistan he found the detainees' claims of a massacre "plausible," since the detainees separately told similar stories. Spry thought an investigation seemed warranted. He found the claims of the involvement of U.S. personnel, however, more specious, mostly because he doubted that Americans would participate in or stand by passively during a massacre. "I did not believe that then and I do not believe that now," he said about the alleged involvement of U.S. personnel.

One of the reasons he pushed for an investigation of the alleged massacre, Spry said, was that the United States could both fulfill its obligations to look into war crimes and prove false any allegations of American involvement.

Risen said he cut the allegations from his story because of space concerns, because he could not prove them, and because he did not believe them. That Spry did not believe them either contributed to his lack of confidence in the charges. "I just felt like the whole issue of potential U.S. involvement in the massacre could not be proven and was not conclusive. Frankly, I don’t believe it and it detracts from the rest of the story. It had been a stumbling block for this story for some time."

The detainees told Spry's interviewers of a harrowing situation. One detainee described being moved by truck just prior to being stuffed into one of the shipping containers, according to an investigative document obtained by Salon (and published here). The truck stopped and he saw "one big, tall, caucasian, American looking man who was wearing blue jeans," the detainee reported, according to a U.S. Criminal Investigative Task Force report. "The man was taking pictures of the trucks and the occupants," the detainee added.

The detainee, whose name is blacked out, said the truck drove for a while and then backed up to a shipping container and 100 men were forced inside. He described hearing screaming and banging on the sides of the container, blacking out from lack of air, and waking up next to a dead man with green foam on his mouth. People rubbed clothes against the ceiling to capture condensation. Around 24 hours later, he and roughly 20 other survivors were let out. The rest died. The detainee heard later that the dead and very weak were "put into a big hole and buried."

Meanwhile, Dostum's name surfaced this week in a video of Pfc. Bowe Bergdahl, the U.S. Army soldier taken hostage by the Taliban three weeks ago. A voice off-camera hammers Dostum, "who had hands in organized crime and lootings and mass murders in the north of Afghanistan." The voice then asks Bergdahl, "Does your government tell you that you support human rights criminals in Afghanistan and you spill your blood for these people?"

"No," Bergdahl responds. "Our government does not inform us of any of these details."