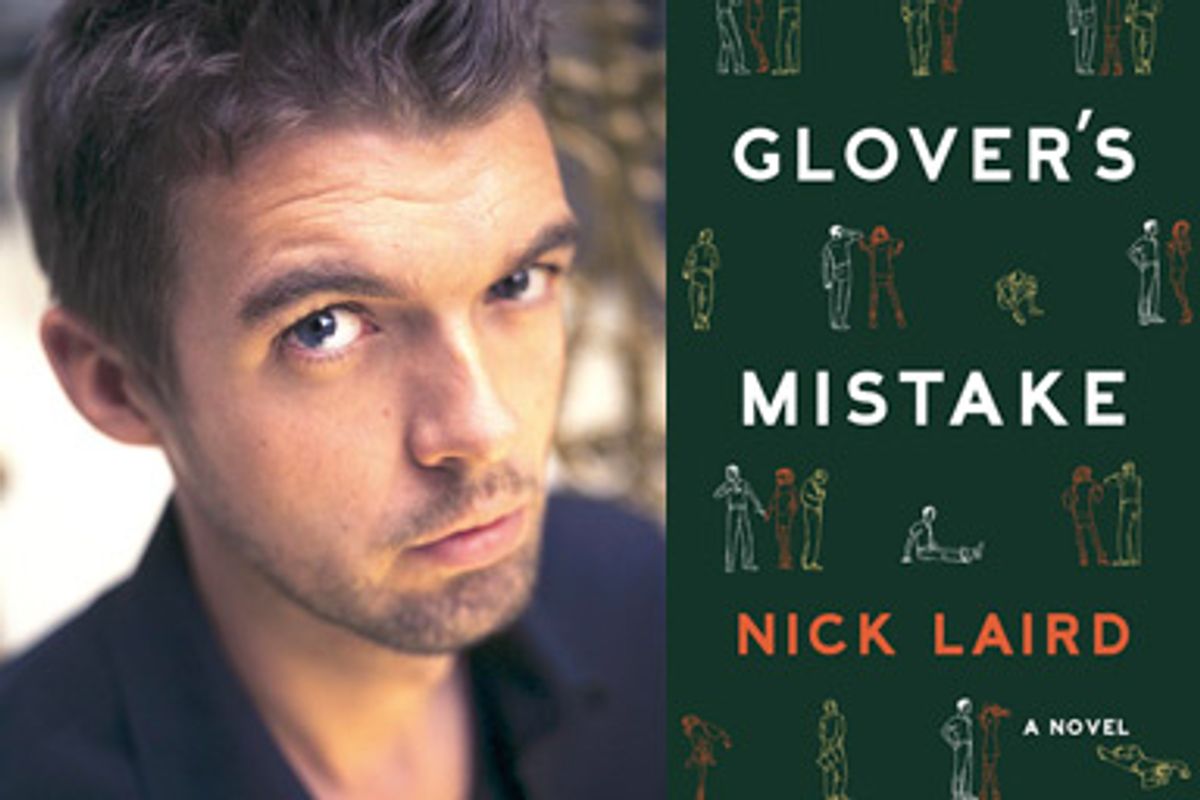 It's easy to underestimate Nick Laird's new novel, "Glover's Mistake," if you only dip your toe into the book. For the first couple of chapters it might be the literary equivalent of one of those early Hugh Grant movies, where the stammering hero trips over his own feet a few times before kissing the girl against a background of quirky, candied pop songs. It's the story of David Pinner, a lovelorn London schoolteacher in his 30s and a never-was artist who vents his frustrated intellect in an anonymous blog he calls (perfectly) the Damp Review. He critiques everything from films to "takeaways," but he finds it easiest "to write on disappointments. Hatreds, easier still."

One day, while leafing through Time Out magazine, David spots a photo of Ruth Marks, an American artist and one of his former instructors, in town for a residency. He attends her opening and diligently engineers a renewed friendship. She's older, talented, charismatic, an emissary from a world of privilege and bohemian glamour who inspires rustling in David's bedraggled romantic hopes.

Those hopes are what make David appear to be our hero, for who among us hasn't learned to sympathize with love's underdogs, those Ugly Bettys searching for someone willing to look deep enough to see their true worth? To David's chagrin, Ruth starts dating his younger, handsome, athletic roommate and best friend, James Glover. Yet surely the blueprints have been laid for Ruth to reconsider at the last moment? Perhaps just as David realizes that a frequent commenter on the Damp Review, a fellow Londoner calling herself Singleton, might be a better match for him after all?

Rather than fulfilling this formula, Laird commences a thorough and merciless dissection of its delusions. David makes several stealthy attempts to sabotage the affair between Ruth and Glover, positioning himself to comfort her in the aftermath. Their relationship proves surprisingly resilient, despite the difference in their ages and what David fondly regards as Glover's "very average" mind. (Worse yet, the lamentably unsophisticated Glover is a regular churchgoer.) When another of his schemes is frustrated, David goes online to post (anonymously, of course) an " honest appraisal" of Ruth's work, sternly noting her "egoistic, solipsistic vision of the world" and the propensity toward "fetishization" exhibited in some nude portraits she's painted of Glover.

The novel's definition sharpens to a painful degree, like one of those HD broadcasts revealing the wrinkles and blemishes on faces we've grown accustomed to viewing in softer focus. Laird's metaphors shift into a more jittery register; doing coke with a bunch of Ruth's arty friends, David notices that one of her former lovers has eyes "the same tense blue of Microsoft Word." He stews in resentment against those who, like Ruth and Glover, are "anointed in luck" by dint of talent, birth or good looks, and posts a screed titled "Wanking Ourselves Senseless: The Death of Love in Modern Culture." He stops just short of complaining that "nice guys" are forever being shortchanged by women because he is, to his misfortune, not quite self-deceiving enough to convince himself that he's nice.

It's a classic case of bait and switch; leading us to expect the palliative of romantic comedy, Laird delivers instead an honest appraisal of his own, as scouring as a stiff wind off the North Sea -- and, if you can take it, as bracing. The Internet that David celebrates as "democratic" and "public" is also, in his hands, a place where passive-aggression is free to flourish luxuriantly. You may have to feel love in order to win it in return, but modern culture provides many opportunities to kill it. And sometimes the ugliness of an ugly duckling goes all the way down to the bone.