The movement is excited over a new document that supposedly proves the president wasn't born in the U.S. 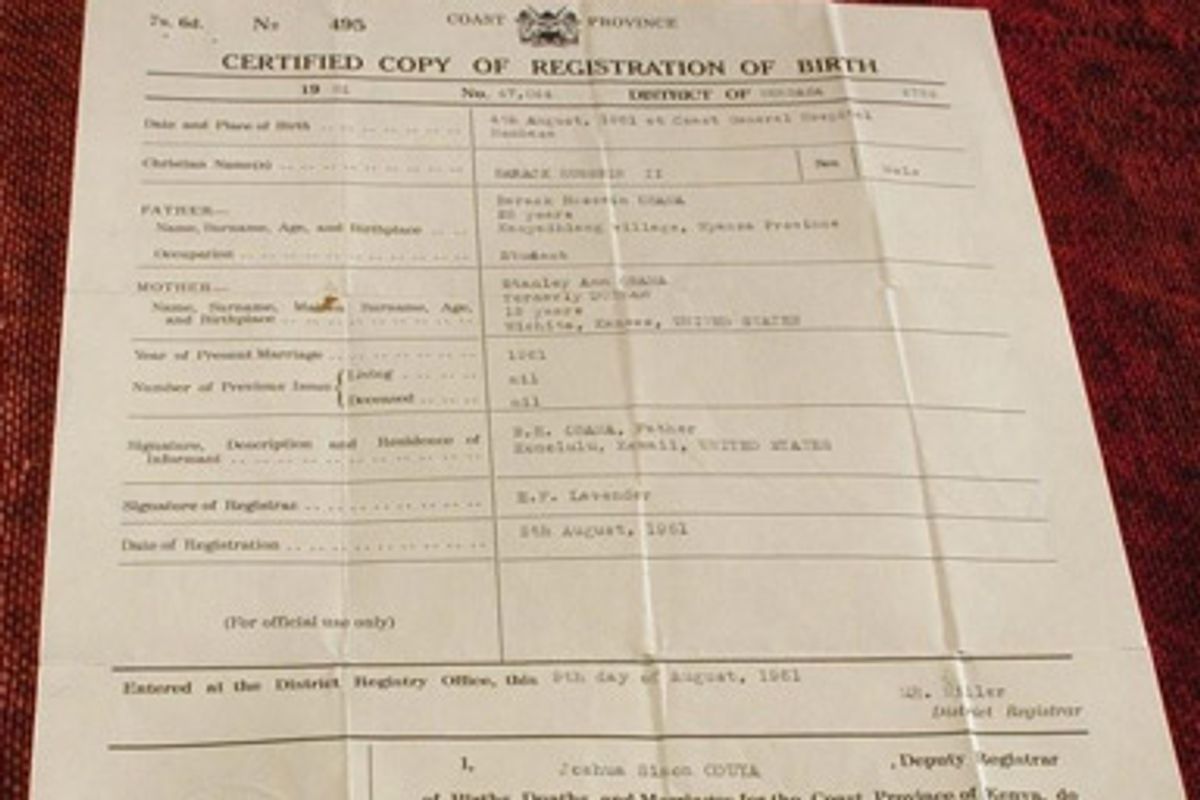 To hear the Birthers tell it, their Holy Grail has been found: Over the weekend, de facto movement leader Orly Taitz released a photo of what is supposedly a certified copy of a Kenyan birth certificate for President Obama, which shows that he was born in Mombasa, Kenya, and not in Hawaii.

The movement is, naturally, all abuzz. But even people who might normally be inclined to support it, like the founder of conservative forum FreeRepublic.com and the Birthers' favorite self-proclaimed document expert, who declared Obama's Hawaiian certification of live birth a forgery, are calling foul. The document is just another in an increasingly long line of fakes intended to prove Obama wasn't born in the U.S.

How do we know?

First of all, Obama was born in Hawaii. He has released a copy of his actual birth certificate -- the same kind of copy anyone requesting their birth certificate from the state would get -- and it has repeatedly been authenticated by Hawaii officials. They've also said that they've checked the original record in their files, and that Obama was born in Hawaii. Those records are supported by two newspaper announcements from the time of the president's birth -- and those announcements weren't submitted by the family, but taken from hospital records.

The Birthers won't care about that, of course -- they haven't yet.

But there are major, glaring flaws in this latest forgery, which is supposedly a copy produced in February of 1964 by the government of the Republic of Kenya (Obama was born in 1961, but the Birthers believe this particular document was related to his parents' divorce).

The biggest? Kenya gained its independence from the United Kingdom in December of 1963, but was known as the Dominion of Kenya until December of 1964 -- 10 months after this copy was allegedly made -- when it became a republic and changed its name.

There are some other basic issues with the document, including the age it gives for Obama's father, who's listed as 26. But Barack Obama Sr. was born in 1936, making him 24 or 25 at the time of his son's birth and 27 or 28 at the time the copy is dated.

The Washington Independent's David Weigel makes another good point about the location of birth given, saying Mombasa just doesn't fit a basic Occam's Razor test and is instead part of the conspiracy theories about Obama's religion:

The image is part of the extremely ill-informed conspiracy theory that Obama was born in Mombasa -- conveniently, one of the more Muslim parts of the country.

This has always been a red flag for conspiracy theorists, so it deserves some explanation. Barack Obama Sr. was born and educated in Nyanza Province, in southwestern Kenya, on Lake Victoria. This is the area where Obama’s family lived and continues to live; Sarah Obama, the step-grandmother of the president, lives in Nyang’oma Kogelo, a small town in the province. But Mombasa is a city on the Indian Ocean, a thousand miles to the east. It didn’t even have an international airport until 1979. And the city wasn’t even part of Kenya when the future president was born. Mombasa was a part of Zanzibar until December 12, 1963, when it became part of the newly independent Kenya.

The new forgery? Why, it claims that the president was born in Coast General Hospital in Mombasa.

Taitz also filed the document in court as part of the case in which she's representing Alan Keyes. (Two plaintiffs, including Keyes' running mate, have just dropped off the case, citing "irreconcilable differences with counsel," not the first time Taitz's eccentric legal strategies have led to disillusionment.)

Even by Taitz's standards, the motion that accompanies the document is bizarre and incoherent. Among other things, she asks that Hillary Clinton, as secretary of state, write to Kenya and to the U.K. and ask for their files, and says that discovery in the case should be expedited because "hearsay evidence exists that an individual involved in the examination of passport files at the United States Department of State relating to and involving certain 2008 Presidential candidates may have been killed in relation to such inquiry."

As always, Taitz started with a small morsel of the truth there and then spun way off from reality. In the filing, she writes, "Lt. Querl Harris was one of the suspects in passport tampering scandal. Washington post [sic] has announced that he was cooperating with the FBI and shortly thereafter he was found dead, shot in the head, sitting in his parked car."

It was actually a man named Quarles Harris, not "Querl," and it was the Washington Times, not the Washington Post. And Harris was indeed under investigation relating to passports at the State Department -- but it had nothing to do with the people who looked at Obama's passport records, among others. According to the Times, Harris was cooperating after he was stopped and "found in possession of 21 credit cards and eight printouts of State Department passport applications." He allegedly told authorities that he was part of a fraud ring that applied for credit cards using information obtained from the applications. But he's shown up on at least one "Obama Body Count" (shades of the Clintons) so it's natural that a conspiracist like Taitz would know something about his case and see it as evidence for her own cause.

Update: Two British professors who specialize in African history have e-mailed Salon to point out another apparent error in the purportedly Kenyan document. The certificate's header reads Coast Province -- but according to the professors, at the time the document is dated, what are now known as provinces were called regions.

Writes Dan Branch, an assistant professor of African history at the University of Warwick:

It seems highly implausible and certainly a hoax. I have not seen any documents from this period in early 1964 that uses the heading of Republic of Kenya -- unsurprisingly given Kenya was not a Republic until December 1964. Moreover, the label of 'Region' was being used in early 1964 instead of 'Province.' While some of the old colonial forms may have still been in circulation, which would have used 'Coast Province,' these would have been headed as 'Colony & Protectorate of Kenya.'

As for his qualifications to judge the document and the header on it, Branch e-mails, "I''ve been working in the Kenyan archives on late-colonial and post-colonial history for the past eight years."