The "American Idol" judge has given her final critique. And we have a few suggested replacements 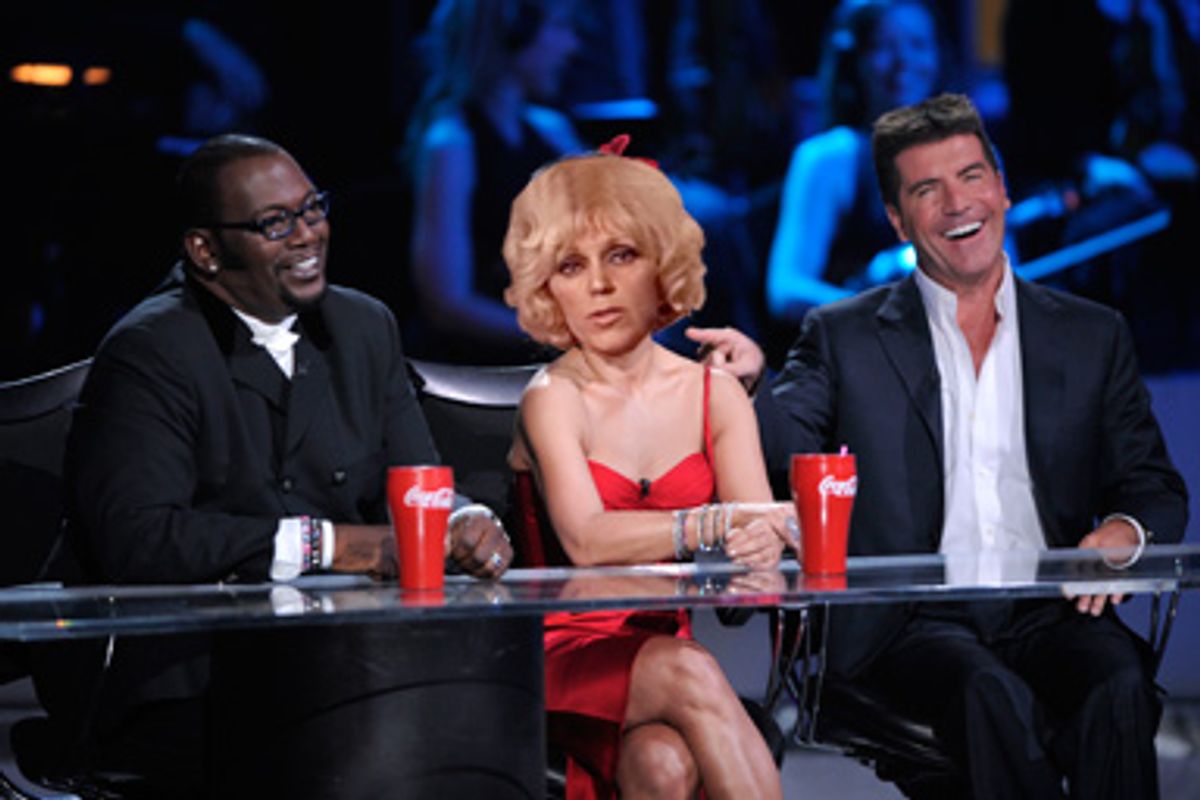 No one can replace Paula Abdul entirely. And let's be honest: Would anyone want to? The famously incoherent "American Idol" judge became a national punch line for her train-wreck tangents and sputtering, new age nonsense: "You stood in your truth" won't be the catchphrase of any summer.

But Paula brought many things to the show -- a nurturing side, an ability to laugh at herself, a tendency to go terribly off-script, a tabloid sideshow, and a history as a performer, if one who peaked before the reign of Autotune. Now that she's leaving the ratings juggernaut, who will late-night comedians have to push around?

At its heart, "American Idol" is nothing more than a classic tale of reinvention. Each season, contestants walk into an audition room as students, wannabes or the best singer in their tiny little town -- and a few months (and several million text messages later), they're sitting at the top of the Billboard charts.

Who better, then, to judge how quickly the contestants can make this difficult transition than Birther in Chief Orly Taitz? Before she muscled her way to the head of the motley crew of loonies who believe President Obama was born in Kenya, Taitz worked as a dentist in Orange County, Calif. And a realtor. And a lawyer.  Now she's moved on to more fame, albeit probably not fortune, shopping phony Kenyan birth certificates in official court filings and appearing on TV.

And oh, how she appears on TV. Taitz -- who once yelled at a roomful of reporters because they had failed to investigate whether Obama's mother was really dead  -- would be the most entertaining "Idol" judge yet. You don't know what she'll say; you just know she'll say it crazily. Picture her yelling at Simon Cowell the way she tears into MSNBC's David Shuster here. Imagine her demanding that contestants bring their high school transcripts into the room, in order to prove they're who they say they are. Instantly, "Idol" would go from glorified karaoke to a Fox News musical comedy. Who wouldn't watch that?

She may not make the next Maxim 100, but the smack-down queen has built a career puncturing overinflated celebrity ego and, frankly, that's the kind of can-do spirit we need for the 500th tone-deaf rendition of "I Believe I Can Fly."

But Rivers is more than cutting. She shares Paula's total absence of filter and willingness to flaunt her own frailty -- from failed marriages to plastic surgery -- and she could swallow Simon's abuse like her 10th vodka gimlet and still order another round. In a way, she's like a linear, Catskills version of Paula: She's hilarious, she's off the rails, she makes us feel kind of sad inside, and her agent, believe me, is waiting for the phone call right now.

If we’re looking for someone who can actually out-Paula Paula, Courtney is our girl. She brings a large bag of loopy everywhere she goes; she pretty much patented unpredictable TV appearances and interviews. Her compelling twitterfeed proves that she is capable of dispensing shards of poetry (of Jack White: “he is like athunderstorm and made me LAUGH!”) and offering encouragement to fledgling artists (of the band Dead Sara: " OH MY GOD! fucking second coming of a chick with pipes who can screamsing and melodic!”) Courtney also has many years of genuinely hard-earned music biz experience and philosophy to bring to the panel. As she sagely tweeted recently, “MAking great rock music is about lot of factors 1 never take yourself too seriously 2 take it very seriously. It Matters” -- words for “AI” contestants to live by.

The former governor of Alaska is the dream candidate to replace the woman whose rambling, heartfelt, incomprehensible comments make James Joyce’s “Finnegans Wake” look like “Baby Beluga.” Palin is tanned, rested and looking for work. She would bring the highest name recognition ever to a prime-time TV show: With Palin on board, “AI’s” ratings would exceed the numbers for Hitler’s Nuremberg rallies. And her misadventures with the English language are even more startlingly advanced than Abdul’s. Imagine the look on Sir Simon’s face when Palin starts raving about Adam Lambert “rearing his head and coming into the airspace of the United States of America.” Moreover, it would be a win for Palin. The “Idol” gig – a gigantic cultural train wreck witnessed by every American citizen -- would position Palin perfectly for that presidential run in 2012.

The ratings for "Jon & Kate Plus 8" are tanking, and we clearly can't stop mocking her hair. She's used to doling out praise and constructive criticism to her eight tiny terrors. And Gosselin has made it abundantly obvious she's happy to critique her husband. Why not let the starry-eyed fame kids be the next victims?

She's an intellectual Paula Abdul: Think of her breathy, loopy, possibly sedated, weirdly flirty star turns on television, whether with Charlie Rose or Chris Matthews. They have a lot of Paula in them. I can easily imagine her holding forth on “AI” performers. For example, just take what she said about George W. Bush and adapt it for Kris Allen:

"I was asked this week why Kris Allen seems so attractive to the heartland, to what used to be called Middle America. A big question. I found my mind going to this word: normal.

Mr. Allen is the triumph of the seemingly average American man. He's normal. He thinks in a sort of common-sense way. He speaks the language of business and sports and politics. You know him. He's not exotic. (He's not Adam Lambert!) But if there's a fire on the block, he'll run out and help. He'll help direct the rig to the right house and count the kids coming out and say, "Where's Sally?" (Adam Lambert would be saying, Hey there, fireman!)

He's responsible. He's not an intellectual. Intellectuals start all the trouble in the world. And then when the fire comes they say, "I warned Joe about that furnace." And, "Does Joe have children?" And "I saw a fire once. It spreads like syrup. No, it spreads like explosive syrup. No, it's formidable and yet fleeting." When the fire comes they talk. Or they sing "Ring of Fire" in a way that would make Johnny Cash squirm in his manly grave.

Have we missed anybody? Blog your thoughts on who should replace Paula on Open Salonor check out the submissions here