Republicans brag about efforts to mobilize mobs to stop Obama. What are Democrats doing to counter them? 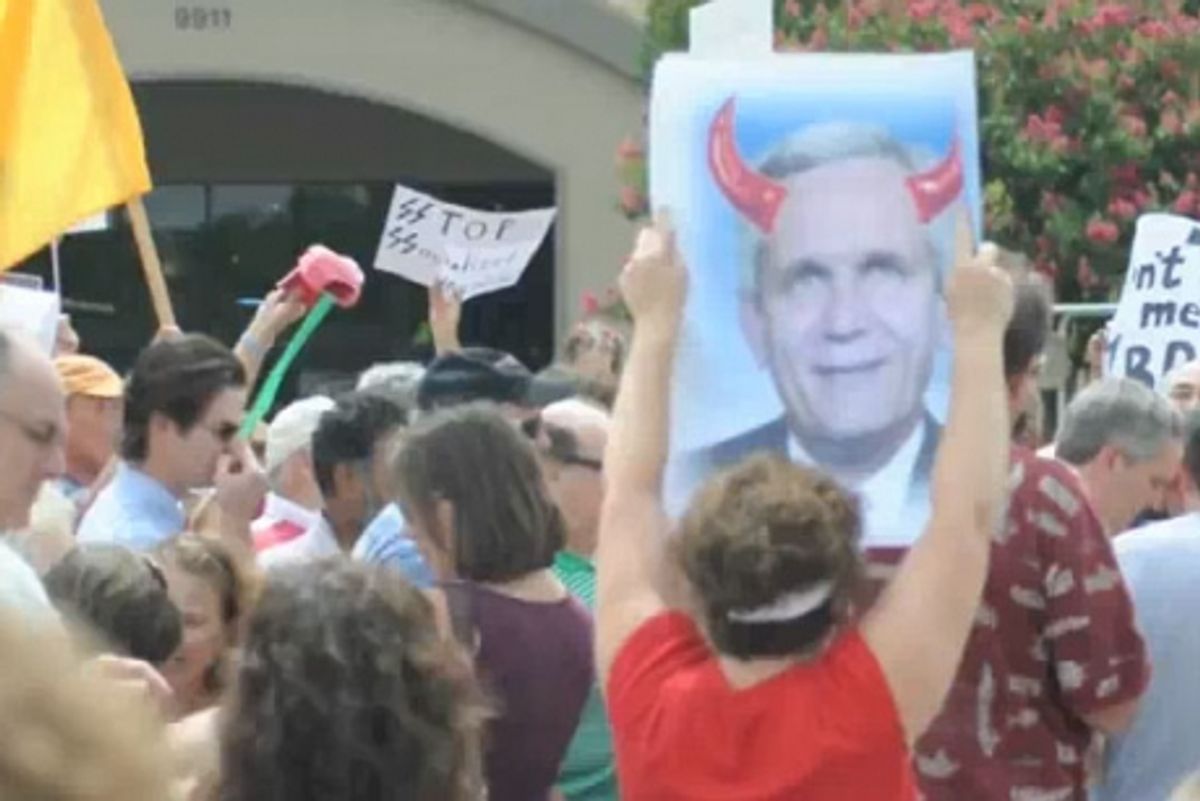 The Republican operatives fighting President Obama's health insurance reform proposals are reaching new lows. (OK, not quite Birther lows, but getting there.) The National Republican Congressional Committee is boasting that the GOP is turning Democrats' summer-recess "town hall" meetings into "town hells." Way to engage in productive political discourse, fellas!

In Connecticut one lout suggested Sen. Chris Dodd commit suicide as a cure for his recently announced prostate cancer. "How come we don't just give Chris Dodd painkillers? Like a handful of them at a time! He can wash it down with Ted Kennedy's whiskey!" Maryland Rep. Frank Kratovil was hung in effigy. Rep. Tim Bishop needed a police escort back to his car. In Austin, Texas, a blue outpost in that red state, Rep. Lloyd Doggett was shouted down by abusive GOP protesters.

Doggett told ABC's Jake Tapper "the Republican Party has coordinated this apparent outrage." But the head of former Rep. Dick Armey's so-called Freedom Works, the GOP Astroturf organization that helped organize the April 15 tea parties, insists "you can't fake this sort of outrage outside the Beltway." (It's nice to have the admission you can fake it inside the Beltway.)

MSNBC host Joe Scarborough, a former GOP congressman, echoed that assertion on Twitter, tweeting Tapper: "You can't manufacture the kind of anger many Americans feel toward their government right now. There are many parallels to '94."

Scarborough's perspective actually helps. If we look back at the class of '94 -- Scarborough's scandal-plagued class -- as an example, in fact Obama may be in good shape. The GOP Class of '94 rode a phony wave of anti-Clinton outrage to control of Congress, but two years later, after their ideas were exposed as dead-end (orphanages for welfare families, anyone?) the president they opposed was reelected overwhelmingly. Let's hope the Democrats can course-correct enough to avoid a '94-style drubbing, but if Scarborough's right, Obama will get a second term and a second shot at his agenda anyway.

But the real lesson here is: The Democrats may well lose seats in 2010 if they don't deliver on what they promised. Healthcare reform was a cornerstone of every leading Democratic contender in 2008; it was key to the forward-looking Obama economic agenda that made John McCain look even more lost and left-behind than he actually is (which is saying a lot). Democrats consistently fail to deliver on campaign promises to their base, where even if Republicans screw their cultural-conservative base -- George W. Bush and Ronald Reagan did a great job making abortion illegal! -- they do deliver on tax cut and deregulation promises to their corporate masters.

Tuesday night Rachel Maddow made a comparison I'd been thinking about: between the current "Town Hells" and the 2000 "Brooks Brothers riot," in which paid GOP staffers, posing as grass-roots activists, stormed the Miami elections office conducting the recount of presidential votes to try to stop it -- and they succeeded. Maddow noted that many Democrats wondered why their party didn't mobilize them to protest in Florida the same way, and I certainly wondered that too. Nine years later, I'm signed up on various Obama, DNC, MoveOn.org and other liberal mailing lists, and I get healthcare reform alerts, but I'm still waiting for an aggressive activist push to counter the GOP's healthcare lies -- from silly claims that Obama's plan forces "end of life" counseling on seniors, to Arthur Laffer's sad, bewildered denunciation of the Democrats' plan for a government takeover of Medicare and Medicaid -- which are, of course, government programs.

The stupid is accelerating, but I'm not sure that a progressive pushback is accelerating at the same rate (Jane Hamsher's efforts aside; if I'm missing something, please let me know in comments). If Obama can't deliver real healthcare reform, Scarborough might be right: It could be 2010 all over again, but 2012 wouldn't look anything like 1996 for the Democrats.