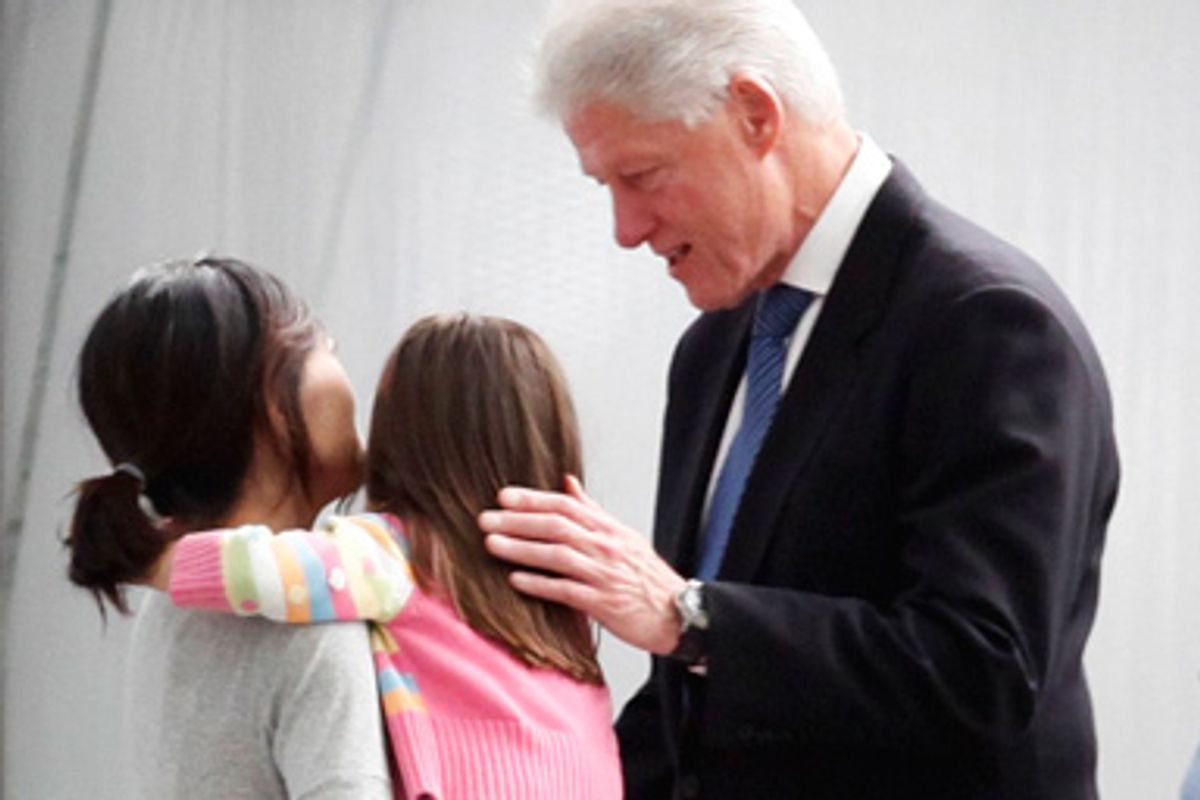 Like a seasonal flu, the verbal virus that is sometimes called Clinton derangement syndrome has struck again, beginning only moments after the 42nd president of the United States appeared on television screens around the world with the two journalists he had helped to rescue from prison in North Korea. And like certain viruses, the syndrome tends to hit hardest among a very specific segment of the population. Most Americans appear to be immune most of the time, as do the majority of human beings on the planet, so this pathology will probably never become a global pandemic.

But pundits everywhere -- from the newsrooms of the "liberal media" to the blogosphere to the Republican noise machine -- seem to be the preferred hosts of the pathogen. While not lethal or physically disabling, it troubles their minds -- and strikes the same people over and over and over again. Symptoms include the recitation of dull sexual japes, sour reflections on celebrity, mindless pronouncements on foreign policy, false accusations of grandstanding, and even furious attacks on innocent individuals who dare to express admiration or gratitude to Bill Clinton (on this particular occasion for saving their lives).

On display in the wake of his successful effort to secure the release of journalists Laura Ling and Euna Lee is the purest and most virulent form of a disorder all too familiar to anyone who lived through the Clinton presidency.

Here was an effort that exemplified the best of America -- a society that values the lives of its citizens enough to send a former head of state, with all the power of government behind him, to the aid of two women in distress. Here was a happy reunion, bringing wives home to their husbands and a mother back to her little girl, that surely uplifted the spirit of anyone who actually believes in family values. Here was a moment of pride and joy.

But not for Gordon Liddy, the demented felon and radio bigot who cackled about "Ling Ling and Wee Wee being locked up for nine hours in an airplane with Bill Clinton." Not for Rush Limbaugh, the obsessive guttersnipe who wondered aloud whether Clinton "hit on those two female journalists on the long flight home." Not for Andrea Peyser, the curdled tabloid columnist who insisted that "the whole shebang was nakedly scripted and staged as a device to help rehabilitate the image of former President Bill Clinton" (and who neglected to mention that Clinton did not speak to the eagerly waiting press corps and has given not a single interview on the North Korea mission). Not for Times columnist Maureen Dowd, who predictably seized on Clinton's mission as an opportunity for gratuitous and ugly insults to his wife, weirdly imagining that the prisoner release was "some clever North Korean revenge plot, giving the limelight to Daddy to punish Mommy." And not for the editors of the Huffington Post, who posted a very strange headline -- "Bill Upstages Hillary ... Once Again" -- on an Associated Press story that didn’t mention her at all.

Analysts have long speculated on the sexual envy that may or may not predispose the syndrome’s sufferers to say these things. What seems clear, however, is that no matter what humanitarian acts Clinton may perform in his post-presidency, he cannot do anything without provoking such inappropriate and embarrassing outbursts. The result, of course, is that their remarks always reveal more about them than about their intended target.

Consider the reaction of the former president’s former advisor Dick Morris, who still pontificates on the Fox News Channel airwaves as a Clinton expert, although he hasn’t spoken with either of them for more than 10 years. Denouncing Clinton’s trip as "awful" and "ridiculous," he suggested with a sickening grin that Ling and Lee should instead have been left to "live with the consequences of their acts" -- essentially a death sentence in a hard labor camp. (Is that what any Fox commentator would say in the unlikely event that any of their colleagues had the guts to try to report on life in North Korea -- and got arrested?)

John Podhoretz didn’t go quite that far in Commentary, but he too felt deeply disturbed by Clinton’s achievement. As a "journalist" who spends most of his life watching television and eating ice cream, he felt moved to mock Ling and Lee for seeking to expose the dark side of the North Korean regime -- and to throw in a few bitter words about Al Gore for employing them at Current TV. If that sounds bizarre coming from a self-styled hard-liner, it is simply another symptom of the mental imbalance induced in some people by the sight of Clinton (and Gore).

Finally there are the "serious" commentators, most notably former U.N. Ambassador John Bolton, the former diplomat best known for disdaining diplomacy and rattling the atomic saber until he was mercifully relieved of public responsibilities. In him the syndrome’s most noticeable effect is a severe case of amnesia. On the pages of the Washington Post, he complained that despite "decades of bipartisan U.S. rhetoric about not negotiating with terrorists for the release of hostages, it seems that the Obama administration not only chose to negotiate, but to send a former president to do so." Leaving aside the question of whether this situation in any way fits that description, Bolton has clearly forgotten the Iran-Contra affair, when his colleagues in the Reagan administration, all the way up to and including the president, negotiated with Iran’s leaders to release hostages in exchange for deadly missiles -- violating statute and policy. He also seems to have forgotten how he tried to help cover up that outrage as an assistant attorney general.

But perhaps this latest outbreak should be considered mild, when compared with the devastating episodes of years past. Nobody is claiming that Clinton murdered or drugged anyone on his trip to Korea, that he profited by selling a real estate parcel there, or that he is a secret agent of the Dear Leader.

They’re saving all that for Barack Obama.