Who's your favorite John Hughes heroine?

A round table on our favorites, from Molly Ringwald's misfit, misunderstood Andie to Ally Sheedy's defiant weirdo 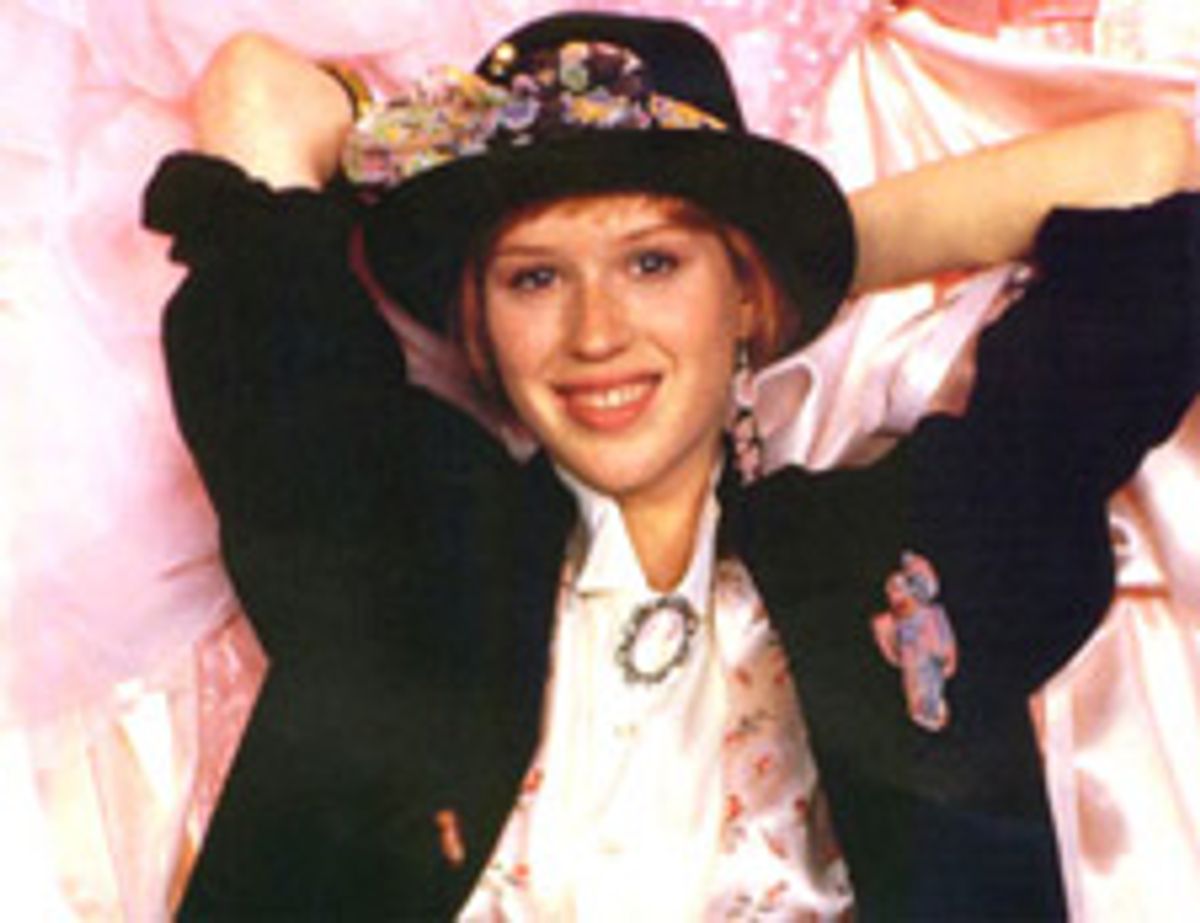 Molly Ringwald in "Pretty in Pink."

The '80s was an era defined by pristine, gleamy-toothed beauties like Cheryl Tiegs and Christie Brinkley, raspy bombshells like Kathleen Turner and Kelly McGillis. The decade's sirens were slender and tall and fabulous and, more often than not, blond. And into that mix wandered Molly Ringwald. Bookish, pouty, peculiar in her prettiness. A redhead, no less. And with 1984's "16 Candles" she became the poster girl of brushed-aside, crushed-out, pissed-upon teen girldom.

John Hughes didn't always write nuanced, relatable heroines -- "Weird Science," anyone? -- but his hot streak of '80s hits introduced us to a series of female characters who were odd and tough and vulnerable. If you were young in the 1980s (or watched cable in the 1990s), chances are there is a Hughes heroine whose struggles feel a little bit like home. We asked the Broadsheet staff to talk about which one they remember best.

I spent the better part of the '80s hearing, "Do you know who you look just like?" I have pale skin, a minor overbite, and incorrigible, bright red hair, so you bet I did.

Molly Ringwald, Hughes' muse, was my cinematic alter ego; I always saw a little of myself on every misfit, misunderstood role. And even though I was already out of high school by the time "Pretty in Pink" came out, it was quirky, thrift store-shopping, wrong-side-of-the-tracks Andie I identified with most. Like her I had a parent who'd long since flown the coop and was learning for the first time that the world is full of people who think that being lucky enough to be born with more somehow makes them superior, and makes anyone different or with less "nada." John Hughes' movies may seem on the surface to be mere romantic teen trifles, but his understanding of the social groups and class tension was stingingly keen. Hell, it's 23 years later, and many days I still feel like Andie, hoping in spite of all the bastards to be loved for who I am.

I saw "The Breakfast Club" when I was 10 years old, and it was nothing less than aspirational: I couldn't wait to get to high school and be a stereotype! I didn't see myself as any of those characters, really, but it was Allison Reynolds -- the patron saint of emo goth, better known to history as "the basket case" or, simply, Ally Sheedy -- who stuck with me. As a suburban consumer of deeply conventional movies and television, I had never seen such a festival of freak on-screen, with her kohl-rimmed eyes and her ragtag, schlumpy sweater and beat-up sneakers. "I had nothing better to do today," she finally confesses, with a twitchy, slithery delivery that makes me want to hug her and hide the knives all at once. Sure, part of me longed to be Molly Ringwald's beauty queen Claire -- cue the obligatory makeover scene -- but even with only a decade under my Velcro belt, I knew that the coolest cats in that dingy library were the two losing all the popularity contests: Judd Nelson and Ally Sheedy.

In one of her very first scenes in “Pretty in Pink,” Iona, who works with Andie at the Wax Trax in downtown Chicago, takes aim at a teenage would-be shoplifter with a staple gun. “Ah!" he says. “You missed my eye by an inch!”

“Half an inch,” says Iona, still cocking her staple gun. As played by Annie Potts, Iona was riveting. She wore black vinyl miniskirts, ‘40s -style hats with veils and red lipstick. She lived in Chinatown. She played mysterious bondage games with surly boyfriends. And she was 30.

At the time “Pretty in Pink” came out, I was a 13-year-old aspiring punk rocker with a budding record collection and lots of thrift store clothing. Iona was utterly mysterious to me.

My friends and I would go to all-ages shows and be shocked when we ran into the occasional 25-year-old. I mean, what the hell? Weren’t they too fucking old to be there?

Looking back, it’s Iona (along with the poignant performance of Harry Dean Stanton as Andie’s kind, unemployed alcoholic father) that makes “Pretty in Pink” such a wise movie. While Andie’s father shows her the dangers of not growing up, Iona shows that being an adult doesn’t mean giving up who you are: In fact, it’s a hell of a lot more fun than being trapped in the high school bullshit of punks vs. the preps. It’s Iona who recognizes that Andie’s friend Duckie is a hell of a lot cooler and more sincere than the rich boy who ditches her for the prom, and it’s also Iona who tells her to go ahead and go to prom anyway. She cuts through Andie’s too-cool-for-school snobbery by telling her that high school itself could be seen as a silly ritual -- with the kind of wisdom that comes from knowing Andie’s got better things ahead, and also that there’s something special about being young.

Of course, the end of the movie undercuts all that by a) having Andie chose Blaine, the prep, over Duckie, the guy who has loved her for who she is [Ed. note: The story behind that much-debated altered ending can be read here], and b) giving Iona a preppy makeover and a new yuppie boyfriend named Terry who owns a pet store. “I look like a mom,” Iona tells Andie. “You look happy,” Andie says.

I’ve always had a remade version in my own head in which Andie goes with Duckie and Iona keeps the vinyl miniskirts and goes on to own the record store, like, say, a certain 35-year-old guy in a Nick Hornby novel. After I turned 30, I would remember her when I looked around at my own friends, all of us still sitting in the backs of rock clubs, now working as reporters or club owners or for labels or in bands. I’m -- seriously -- off to play an '80s dj set tonight with many of the records I bought back in 1986. Thanks, John Hughes, for showing us that the things we loved as teenagers could still follow us to adulthood. (Bonus: The National covers "Pretty in Pink." See what I mean?)

Partly I chose Watts because I really wanted Andie to end up with Duckie, and Keith choosing Watts scratched that itch. But it's also because of something a friend recently said to me in a discussion of why we love Mary McCormack's character on the show "In Plain Sight": She is never in a good mood. Seriously, how often do we get to see a chronically grouchy heroine? Curmudgeonly, complaining, sourpussed yet lovable men are all over the big and small screens, but women with similar sharp edges are almost always villains or jokes.

Watts is grouchy, snarky, tough, insecure and sometimes downright mean. She has no knack for the sort of performative femininity that helps Amanda Jones (Lea Thompson) transcend her wrong-side-of-the-tracks background among the rich and popular, so she can only deflect their derision with an endless supply of snappy comebacks -- and, often enough, snappy preemptive strikes. She alienates people who care about her, is suspicious of people who treat her kindly, insults pretty much anyone who crosses her path, and throws herself willingly into situations that stand an extraordinarily good chance of further breaking her heart. In other words, she reminds me a lot of myself as a teenager. And this is our heroine. This is the girl we want to see triumph.

I could do without her simpering over the diamond earrings at the end -- which struck me as out of character even when I was 12 -- but I appreciate that when Watts finally gets the guy, at the moment you'd usually expect the power of movie lurve to instantly alchemize her snark into sap, she retains her essential self. "I'm sorry," Keith tells her. "I didn't know" -- meaning he didn't realize his devoted best friend, who'd dropped such subtle hints as insisting he kiss her to "practice," was in love with him all along. "Yeah, well, you're stupid," Watts replies. "I always knew you were stupid." That's my girl!

Thank you, John Hughes, for giving me a girl like that to root for.