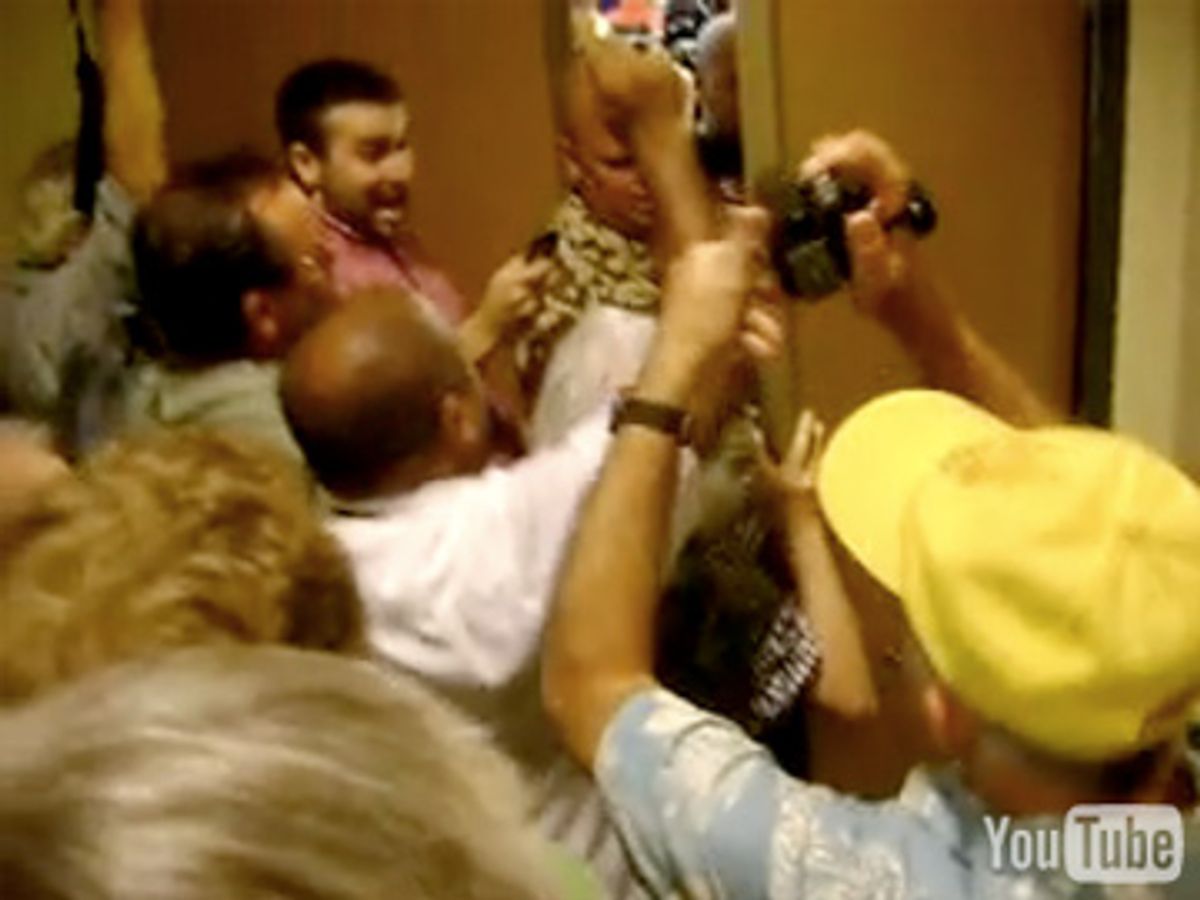 Ah, American democracy: Over the past week, members of the House -- currently in recess -- have been holding town hall meetings that have gotten progressively nastier as more and more organized opponents of the Democrats' healthcare plan have shown up to protest. The debate between the two major parties over the town halls has gotten pretty nasty too, with claims and counter-claims about who, exactly, is un-democratic and who's trying to stifle the voice of the people.

Now, the tension is really starting to erupt, and on Thursday night, two of the town halls turned violent.

At one, a forum on aging held in St. Louis County by Rep. Russ Carnahan, D-Mo., six people -- one of them a reporter -- were arrested. Two people, one conservative and one staffer with the Service Employees International Union, were reportedly sent to the hospital with minor injuries sustained during scuffles at the event.

In Ybor City, Fla., there were similar scuffles, some of which were reportedly broken up by law enforcement, but no arrests. That forum was organized by a state legislator, Democratic Rep. Betty Reed, but U.S. Rep. Kathy Castor, D-Fla., was also there. She didn't get much of a chance to address the crowd, though -- the Tampa Tribune reports, "Castor tried to speak for nearly 15 minutes but the crowd drowned her out, chanting, 'You work for us,' 'Tyranny, tyranny,' and 'Read the bill.' She ultimately left the meeting early, further angering some attendees."

In both cases, the breaking point was apparently the size of the crowd -- at both of the town halls, the number of people who showed up was too large for the space in which they were being held, and so some people were not allowed in. Conservative protesters took this as a sign they were being shut out because of their political beliefs, especially in Misssouri, where things turned ugly when two SEIU employees were allowed in when others were being kept out. (Josh Marshall notes that SEIU was sponsoring the event, and the employees in question were apparently staffing it.)

There have been accusations that astroturfing -- fake grass-roots efforts led by industry or lobbying groups -- is behind the heavy anti-reform turnout that's been a hallmark of the recent town halls. In both Florida and Missouri Thursday night, there were organizations apparently responsible for the size of the crowd, but they were organizations of a different sort -- Missouri's crowd was reportedly spurred on by the local Tea Party Coaliton, while Florida's was drummed up by Glenn Beck's 9-12 Project. (Beck himself probably had little or nothing to do with it; it's a decentralized group.)

A third town hall, this one held by Rep. Ann Kirkpatrick, D-Ariz., had to be shut down. Politico's Martin Kady reports that "protesters showed up after a robocall -- it's unclear from whom -- went out to Arizona voters encouraging them to show up at the event." Kirkpatrick was supposed to have one-on-one talks with attendees, but, according to Kady, "was unable to get the event started and canceled it."