Will any GOP leader denounce the bizarre claim that Obama's plan supports euthanasia? 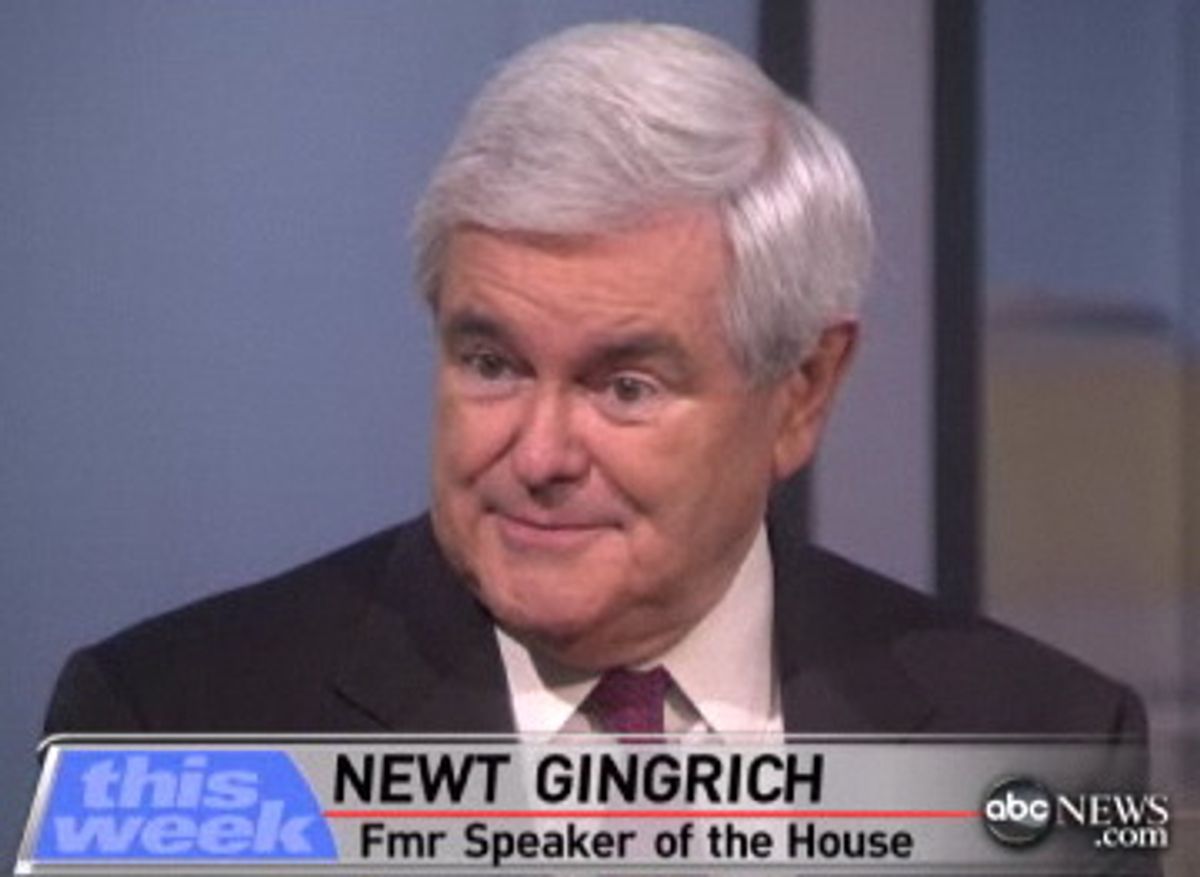 It gets sillier: Now we have two potential candidates for the 2012 GOP presidential nomination, Sarah Palin and Newt Gingrich, spewing the worst sort of lie about President Obama's health plan: That it will establish "death panels" to decide who deserves medical care and who deserves euthanasia.

Clearly the GOP has decided this issue is a winner. Older Americans are still more reliable voters than middle-aged and young voters, and Republicans are seeing political value in scaring them with threats of mandatory euthanasia and a Medicare collapse.  It was amusing to see Senate Minority Leader Mitch McConnell, no big Medicare proponent, warning hysterically Sunday that the Democrats want "a half-trillion dollars in Medicare cuts." This from the party that's also railing about how the Obama plan will add to the deficit, and is opposing every reasonable effort to curtail dangerously out-of-control healthcare costs, whether public or private.

On ABC's "This Week With George Stephanopolous," Gingrich was given a chance to reject Palin's false and vicious claims about "death panels." Part of me expected Gingrich to take that opportunity; whatever else he is, Gingrich doesn't seem demonstrably stupid, and the "death panel" rhetoric seemed beneath him. It also might have been a good way to distinguish himself from a possible 2012 rival.

Once again I gave too much credit even to a Republican I dislike. Gingrich declined Stephanopolous' generous offer, and instead allied himself with Palin's take on Obama's plan: “You're asking us to decide that the government is to be trusted ... You are asking us to trust turning power over to the government, when there are clearly people in American who believe in establishing euthanasia, including selective standards."  Watch (text continues below):

More than once Stephanopolous reminded Gingrich such language wasn't in the bill; the controversial passage pays for voluntary counseling on living wills and end-of-life care. That's voluntary, as in voluntary, as in you decide whether you want it. Also, your living will could say, keep me alive as long as possible, damn the cost. Oh, and did I mention it's voluntary?

A few days after publishing Stephen Pearlstein's excellent and sadly unusual takedown of GOP healthcare lies, the Washington Post apparently was striving for "balance" when it allowed "liberal" columnist Charles Lane to take up the Palin/Gingrich line, insisting he, too, worries that Obama's plan might push seniors unwillingly toward end-of-life decisions that hasten the end of life. Lane finds the voluntary counseling not entirely voluntary, because Medicare doctors will be encouraged to raise the issue themselves, not merely wait until a patient asks them about such assistance. "To me, 'purely voluntary' means 'not unless the patient requests one,'" Lane argues. Well, Chuck, to me purely voluntary means the patient is told of all his or her options, and is free to accept or decline.

What's rich about Lane's piece is that he ends it with a disclaimer that he thinks makes him look more reasonable, but in fact makes him look like the out-of-touch Beltway elitist that he is:

"As it happens, I have a living will and a durable power of attorney for health care. I'm glad I do. I drew them up based on publicly available medical information, in consultation with my family and a lawyer. No authority figure got paid by federal bean-counters to influence me. I have a hunch I'm not the only one who would rather do it that way."

Does the cosseted Chuck Lane really not understand that many Medicare recipients may not have access to costly lawyers and supportive, well-informed family members to help them with their living wills and durable power of attorney for healthcare? What a champion of the people.

This debate is getting dumber, not smarter. Although Obama already answered the "end of life" scare tactics once, he's going to have to do it again. I also think it's time for him to lay out his plan, exactly what he wants, and bring Democrats to heel. With Republican operatives and misinformed Americans shouting down the forces of reform at "town hells," it's going to take Obama's megaphone to cut through the lies, lay out what his plan would do, and remind people why they elected him: to make exactly the kind of change Palin and Gingrich are fighting with every lie necessary.