Conservatives say the renowned bioethicist, brother of Rahm Emanuel, is the man behind the infamous "death panels" 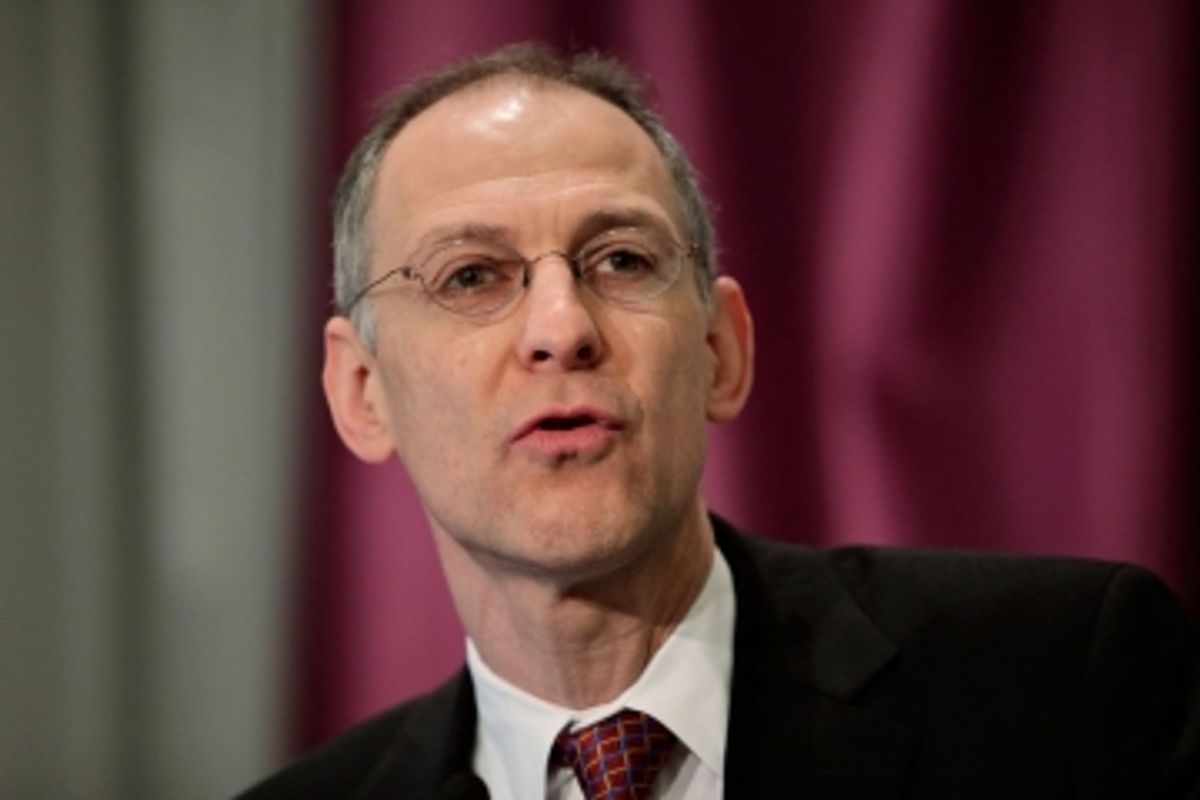 Dr. Ezekiel J. Emanuel, special advisor for healthcare at the Office of Management and Budget, speaks at the American Medical Association's annual conference at the Grand Hyatt Hotel in Washington, Wednesday, March 11, 2009.

Like Sarah Palin said last week, if you're old, sick or disabled -- or have a friend or loved one who is -- you should be very wary of Democratic healthcare plans. And, too, you should keep an eye on "the Orwellian thinking of the president’s health care advisor, Dr. Ezekiel Emanuel, the brother of the White House chief of staff." This is, after all, one of the two advisors to President Obama dubbed "deadly doctors" by the New York Post, a man also known as "Doctor Death," who, as conservative blogger Gateway Pundit explained, "supports euthanasia ... [and] believe[s] medical care should be reserved for non-disabled 'participating' members of society."

It's become a growing theme on the right: "Obamacare" will mean mandatory euthanasia for your grandmother in order to save money, and the person who created the ideological underpinnings for that policy is the brother of White House Chief of Staff Rahm Emanuel.

There's a certain irony to that suggestion. Ezekiel Emanuel, who's currently advising the administration on healthcare reform through a post at the White House Office of Management and Budget, is actually one of the country's leading medical ethicists, a forceful defender of people approaching the end of their life. Indeed, he opposes even voluntary euthanasia and physician-assisted suicide.

The charges against the doctor are "a gross distortion of Dr. Emanuel's 25 years as an oncologist and leading academic researcher," Kenneth Baer, the communications director at OMB, told Salon. "He has dedicated his professional life to improving the quality of care and giving more choices to terminally ill patients. He was an outspoken public opponent of euthanasia when the Supreme Court was considering the legality of physician-assisted suicide. We all wish that instead of spending time distorting one doctor's record we all could come together and do the hard work of health insurance reform. This is only a distraction from that important work." (Emanuel himself was vacationing and unavailable for comment.)

The wave of anti-Emanuel feeling kicked off in earnest when, on July 24, the Post published an Op-Ed by Betsy McCaughey about him and another Obama advisor, David Blumenthal. McCaughey is a veteran of the last war over healthcare reform, in the Clinton administration; "No Exit," an article she wrote for the New Republic, was instrumental in the defeat of the Clinton plan -- the magazine later disowned the piece, due to its numerous factual errors.

Still, the Post gave her plenty of room to mislead its readers, as she wrote:

Emanuel ... believes that "communitarianism" should guide decisions on who gets care. He says medical care should be reserved for the non-disabled, not given to those "who are irreversibly prevented from being or becoming participating citizens ... An obvious example is not guaranteeing health services to patients with dementia" (Hastings Center Report, Nov.-Dec. '96).

Translation: Don't give much care to a grandmother with Parkinson's or a child with cerebral palsy.

The quote McCaughey used here was technically accurate, but was stripped from the proper context, twisted to distort the actual meaning of Emanuel's words. Notably, she left out Emanuel's opening qualifier about the view he was discussing: "Without overstating it (and without fully defending it) not only is there a consensus about the need for a conception of the good, there may even be a consensus about the particular conception of the good that should inform policies on these nonconstitutional political issues."

Plus, at the end of the passage McCaughey quoted, Emanuel wrote, "Clearly, more needs to be done to elucidate what specific health care services are basic; however, the overlap between liberalism and communitarianism points to a way of introducing the good back into medical ethics and devising a principled way of distinguishing basic from discretionary health care services." (In a post on his blog, ABC News' Jake Tapper makes a very good point about how academic writings that are, like this one, "exercises in philosophy," can be twisted this way.)

This passage of McCaughey's has been picked up by people like Palin, who apparently saw it as evidence for her claim that her son Trig, who has Down syndrome, would have to face a "death panel." But Emanuel's past writing makes it very clear he would vociferously oppose such an idea.

In a March 1997 piece for the Atlantic, he said, "The proper policy, in my view, should be to affirm the status of physician assisted suicide and euthanasia as illegal." (His emphasis.) In January of the same year, he wrote in the Wall Street Journal, "[L]egalizing euthanasia or physician-assisted suicide would be of no benefit. To the contrary, it would be a way of avoiding the complex and arduous efforts required of doctors and other health-care providers to ensure that dying patients receive humane, dignified care."

In her Post Op-Ed, McCaughey also said Emanuel "explicitly defends discrimination against older patients" and quoted him as saying, "Unlike allocation by sex or race, allocation by age is not invidious discrimination; every person lives through different life stages rather than being a single age. Even if 25-year-olds receive priority over 65-year-olds, everyone who is 65 years now was previously 25 years." The implicit argument, made explicit by those commentators who followed up on the article: Emanuel wants to ration healthcare, diverting resources to the young and away from the old.

Not mentioned? The context in which he espoused this view: A situation in which rationing is already happening because supply simply can't keep up with demand. The U.S. has already laid out guidelines that specify who would get precious flu shots in case of a pandemic, with the elderly given a high priority because of their vulnerability to the virus. In the original paper that laid the groundwork for the article McCaughey quoted, Emanuel and his co-authors were simply proposing a different system -- a controversial one, to be sure, and not one the medical community at large espouses, but still not nearly as radical as it's been made out to be. Instead of prioritizing the number of lives saved, the researchers said that "life-years" should take precedence.

"Most people have the intuition to say, 'Give it to my 19-year-old. I got to 65; I've lived a good life,'" Emanuel explained to the Washington Post in 2006. "We are not interested in purely the number of lives (saved), but also life-years."

Even if you were to accept the premise that Emanuel really doesn't care for patients, that he's just a cold utilitarian, there's still a major problem with the logical leap his detractors make from there.

Say for the sake of argument that Emanuel is willing to march the old and the disabled off to be turned into Soylent Green if it will save The State some money. (And to be very clear, he's not.) One big problem remains: He doesn't actually believe that it would save any significant amount of money. In fact, back in 1994 he co-authored with his then-wife a study showing that the economic cost of caring for the dying isn't nearly as high as it's made out to be, and that not much can be done about it anyway.

"We must stop deluding ourselves that advanced directives and less aggressive care at the end of life will solve the financial problems of our health-care system," the two wrote. In testimony he gave to the Senate Finance Committee later that year, he said, "Just because we are spending a lot of money on patients who die does not mean that we can save a lot of money on end of life care."