Is Obama really that unpopular? 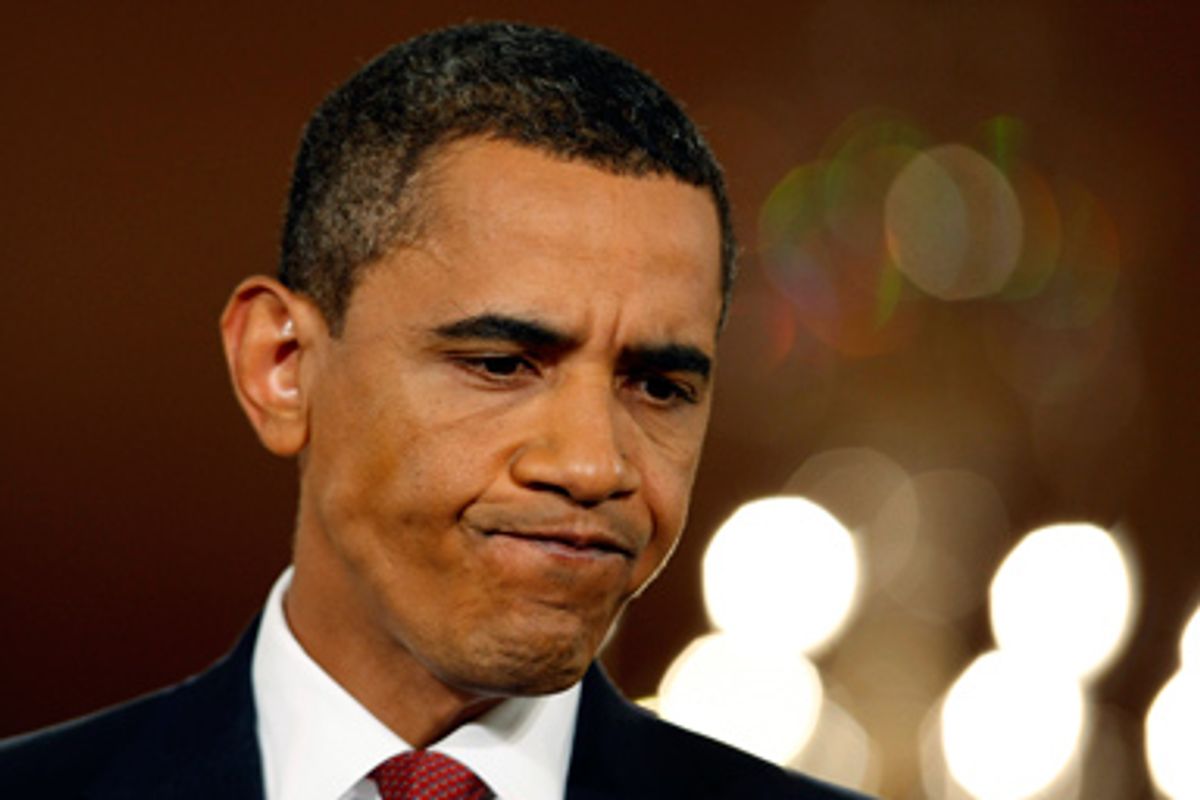 U.S. President Barack Obama listens to a question during a news conference in the East Room of the White House in Washington, July 22, 2009.
--

Let's dispense with the "dog bites man" aspect of this first -- Barack Obama's approval rating has slipped. As it does for all presidents in the first year, as hope collides with reality, expectation with output.

His latest number is about 54 percent, according to the Real Clear Politics average of most recent national surveys. That places him practically at the bottom (Bill Clinton was lower at 44 percent) for this stage of presidents for which we have a track record of polling in their first terms, essentially beginning with Truman. (I suspect Obama's fellow Illinoisan Lincoln -- depending on how the South was sampled -- would never have hit 54 percent.) It marks a decline from Obama's early peak of 69 percent, a faster decline than any of the most recent six presidents. The most recent drop has largely occurred among the critical electoral group of independents, as Republicans have been fairly hostile to Obama from the get-go and Democrats are still supporting him in overwhelming numbers. And his specific approval marks on issues such as the economy and healthcare have dipped below 50 percent.

Fifty-four percent is, by the way, a point more than Obama's standing in "the only poll that counts." Obama's final tally on Election Day 2008 was 52.92 percent. And with that context in mind a longer view of this admittedly vital measurement suggests that the 44th president of the United States is hardly in a real danger zone just yet. Three pretty huge factors argue against the increasingly popular and clearly facile view that -- "I'm shocked, shocked to find that gambling is going on in here!" -- Obama is now in deep doo-doo.

Popularity ain't what it used to be. Simply put, sustainable approval from the public is increasingly hard to achieve for our fearless leaders. Consider the last 11 presidents before Obama -- I am excepting Truman and Ford because one was elected more than three years after taking office, and the other never was. That leaves nine elected presidents. Consider their average approval marks as of August in their first year of elected office. The first three, Eisenhower, Kennedy and Johnson, had a 71 percent rolling average. The second three, Nixon, Reagan and Carter, averaged 61 percent approval. Bush One, Clinton and Bush Two managed only 56 percent. See where this is going? In our hyped-up, media-saturated, partisan age, the numbers of old are simply unattainable. By the way, the last two occupants of the White House, who stood at 44 and 57 percent, respectively, at this stage? They both won reelection.

It's all in the timing. No two presidencies are alike, due to each president's own initiatives, electoral or other opponents, and uncontrollable external events. The two highest approval ratings ever recorded in the Gallup Poll were by the two George Bushes -- 89 and 90 percent. The elder Bush came off his Gulf War high and received 38 percent of the vote and a pink slip less than two years later; the younger Bush won narrowly three years after his post 9/11 peak. Two of the lowest early-first-term ratings were handed to Ronald Reagan and Bill Clinton -- neither had a difficult reelection. There is certainly at least some plausible evidence that a first-term presidency that stacks its bad news, like a recession, or a troubled attempt to reform healthcare, into the first half of that term has a good chance to recover by the second and most crucial half.

In Obama's case, it really is the economy, stupid. All the other carping about the vagaries or deficiencies of his healthcare plan, the role of government, about his supposedly overly ambitious agenda, his foreign policy foibles, won't mean a thing if his economic ship comes in at any point in the next 18 to 24 months. He will then have a recovery with which to construct a narrative: "We inherited a mess. We took action, bold action, though some of it was unpopular. And in tandem with the great skill and power of the American people we turned things around." Now how persuasively are Bobby Jindal, Sarah Palin or even Rush Limbaugh going to counter that?

You can't beat something with nothing. Speaking of that opposition, it does matter with whom and how Obama is challenged. The GOP is still exploring new depths of partisan unpopularity,

Almost none of the cases where a president did not win reelection in the last 60 years offer much in the way of comparison to the current situation. Truman and Johnson opted not to run in the face of unpopular wars, though LBJ only did so after a stinging rebuke from the primary voters of New Hampshire. Gerald Ford, though he almost closed the gap with Jimmy Carter in the final days of the election, failed to deliver a third consecutive Republican term in the White House after the worst political scandal in the nation's history. Bush Senior similarly failed to deliver a fourth consecutive term for his party because a) the nation's attention turned to the economy as his turned to his wristwatch, and b) a skilled young Democrat emerged to run through the gaping hole left by a populist blocking back who desperately wanted Bush out of office. Those were all the last gasps of political eras lasting eight to 20 years. Obama's historic presidency is the first term for a party that had previously been out of power for two.

In the only "pure" case of a first-term defeat that could be analogous to Obama's situation, Jimmy Carter was manhandled by events and an exceptional opponent. First he was battered by an out-of-control inflation rate, an oil embargo and a lingering hostage crisis. Then he was weakened by an internecine primary battle with the liberal wing of the Democratic Party and its "royal family." Remember that for all the hoopla over Hillary Clinton's refusal to concede in 2008, in 1980 Teddy Kennedy took his fight with an incumbent president all the way to the convention, despite having half as many delegates. Once Carter limped into the general, he was dispatched by the "Great Communicator," one of the most skilled Republican political figures since Teddy Roosevelt. It was Carter's 1976 victory that was the fluke. A Baptist from Georgia won narrowly in the wake of Watergate and Vietnam with votes from constituencies whose support no Democrat could sustain. Reagan's ascension in 1980 was the more predictable outcome, the result of long-term demographic trends, given the growing impact of the Sunbelt and evangelical Christians, and the Democrats' weakened hold on blue-collar America.

In 1996, Clinton used triangulation and unappealing GOP foils named Gingrich and Dole to win a second term; Bush the younger used 9/11 and fear about terrorism plus organizational power to best Kerry in 2004; Nixon and Reagan ran to landslides in 1972 and 1984 over Washington figures who came to represent the failed or liberal (read: weak) elements of their party. First-year approval ratings or lack thereof had almost nothing to do with these victories. And unlike Jimmy Carter, none faced any significant primary opposition.

Where will the primary challenge to Obama come from? Would any significant element of the Democratic Party be likely to lend support to such a rebellion? He won by a larger margin than any Democrat since LBJ, and mobilized electoral blocs that are key to the future of the party.

Where is the ascendant trend for the GOP, when they are the ones losing the "growing" constituencies -- young people, Latinos and the West -- and they are the ones whose policies created the mess Obama inherited? Where is the GOP's heir to Reagan? Or even the two Bushes? In Wasilla? The 21st century Gipper is certainly not in Washington.

As to the economy, everyone's guess is as good as the next person's. Approval ratings won't matter much if we never get out of the current bind, as even Obama himself in a moment of surprising honesty has admitted. But if things get even moderately better, it is hard to imagine, short of scandal or war, that this nation will turn its back on the choice for change it so decisively made last November.