While the media covers Astroturfed outrage, thousands of underinsured Americans line up for free healthcare in L.A 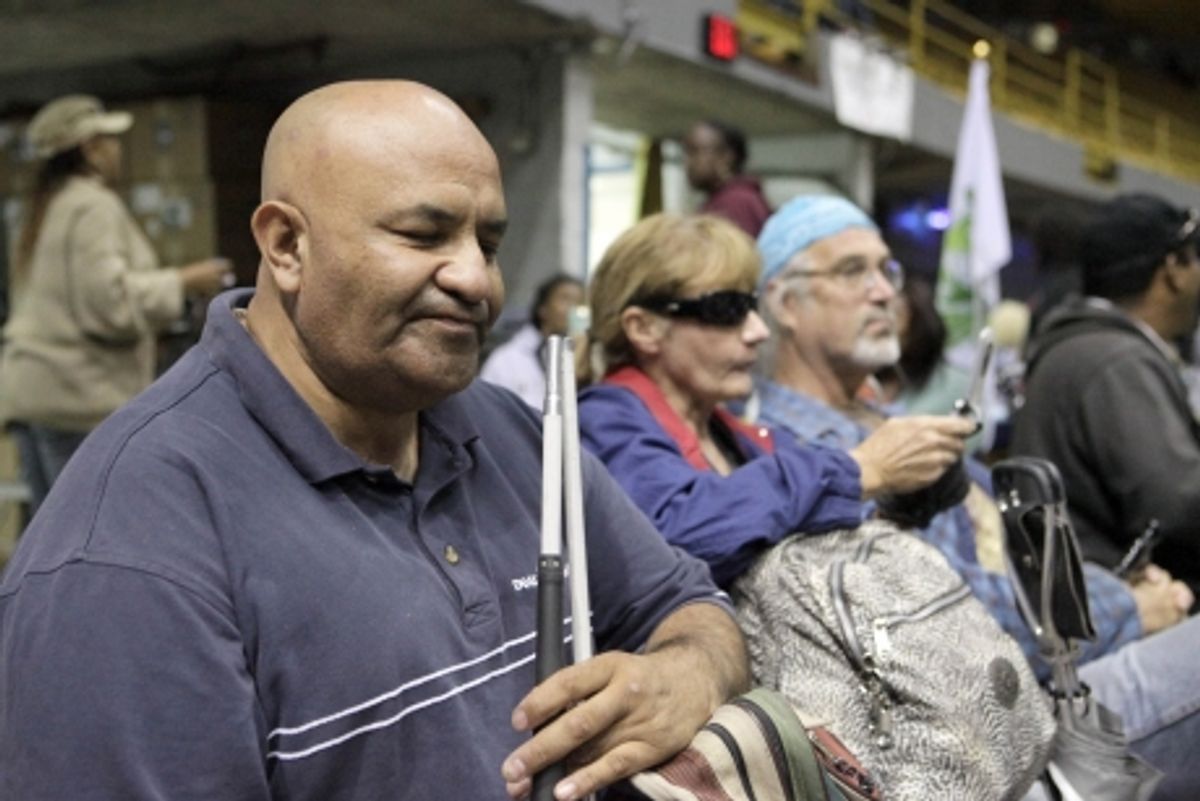 Arturo Castaneda waits his turn for dental care at a large health care clinic set up by Remote Area Medical at the Forum in Inglewood, Calif., Tuesday, Aug. 11, 2009.

As President Obama heads to Bozeman, Montana today for a second "Town Hall" on healthcare, I find myself wishing he'd hosted one of his events at the teeming, third-world-style health clinic set up at the Inglewood Forum in Los Angeles. It's a wonderful example of American volunteerism and compassion; it also represents a complete breakdown in our values of fairness and equal rights.

The clinic is run by the non-profit Remote Area Medical group, founded two decades ago to bring medical advances to the third world. Now they're doing 65 percent of their outdoor clinics in the U.S, according to CBS News. They've been serving 1,500 uninsured people a day for the last three days, many if not most of them employed people who lack insurance.

It's stunning how much more media coverage the rowdy, abusive "Town Hells" are getting than the tragedy of the Inglewood Forum. It's as the town hall noisemaking was a spontaneous outpouring of civic concern, instead of an organized campaign by an angry, deluded activist fringe. As Gabe Winant revealed Thursday, Glenn Beck's so-called 9/12 group has played a big role in turning out the "town hell" shouters -- including the supposedly naïve, apolitical star of Arlen Specter's Lebanon, Pa., town hall, Katy Abram.

While Abram told MSNBC's Lawrence O'Donnell that she wasn't very sophisticated about politics, and claimed not to even know her family income, in fact she's a leader of the 9/12 group, setting up its networking site on Ning, greeting new members, inviting folks to events at her home and elsewhere – and last night, after her star turn, comparing her cause to that of Martin Luther King Jr.

On May 7 she posted an invitation to a woman named Sandra:

Welcome to the Lebanon 9-12 Project! Please take a moment and check out the website. We have had one meeting so far and are having a second one this Saturday at my home in Creekside (North Cornwall Township.) If you are interested in attending please go to the Events section and RSVP. I look forward to meeting you.

As she posted on Meetup.com, "my husband and i are hosting a party in Lebanon, PA. I was going to have it at our home, but if we have enough attendees I will move it to a local restaurant/pub. Let me know if you're interested. We're 25-30 minutes from Hbg and 25 minutes from Manheim."

And unbelievably, late yesterday she posted this to the site, comparing herself to Martin Luther King:

I just wanted to thank everyone for their support. These past few days have been trying on my family. But the good outweighs the bad right now. The amount of emails and phone calls I have received supporting me have been amazing. There are so many good people in this country. I have hope that we will overcome.

I have a dear friend whom I went to high school with. He told me today on the phone that Martin Luther King had been marching. Someone threw a brick at his head. and yet he kept walking...

that is what we need to do...keep walking. Let us not allow these people to knock us down. We will stand up taller and speak louder. We can accomplish great things...

The New York Times has a great piece today showing that in addition to the Glenn Beckers and the Birthers and the Deathers, the very same cast of characters who defeated President Clinton's health care reform effort 15 years ago is up to no good once again in the debate over "Obamacare." The Times says the lunacy began "openly emanating months ago from many of the same pundits and conservative media outlets that were central in defeating President Bill Clinton’s health care proposals 16 years ago, including the editorial board of The Washington Times, the American Spectator magazine and Betsy McCaughey, whose 1994 healthcare critique made her a star of the conservative movement (and ultimately, New York’s lieutenant governor)."

Meanwhile, the Congressional Budget Office says the gap in life expectancy between rich and poor has doubled since the 1970s, as the number of uninsured grew. At least 22,000 people die every year because they lack insurance. And thousands of Americans are lining up in the hot Los Angeles sun to get health care. Is this a great country, or what?