Crazy people are the best

From "Flipping Out" to "Saving Grace," wackiness is in this summer 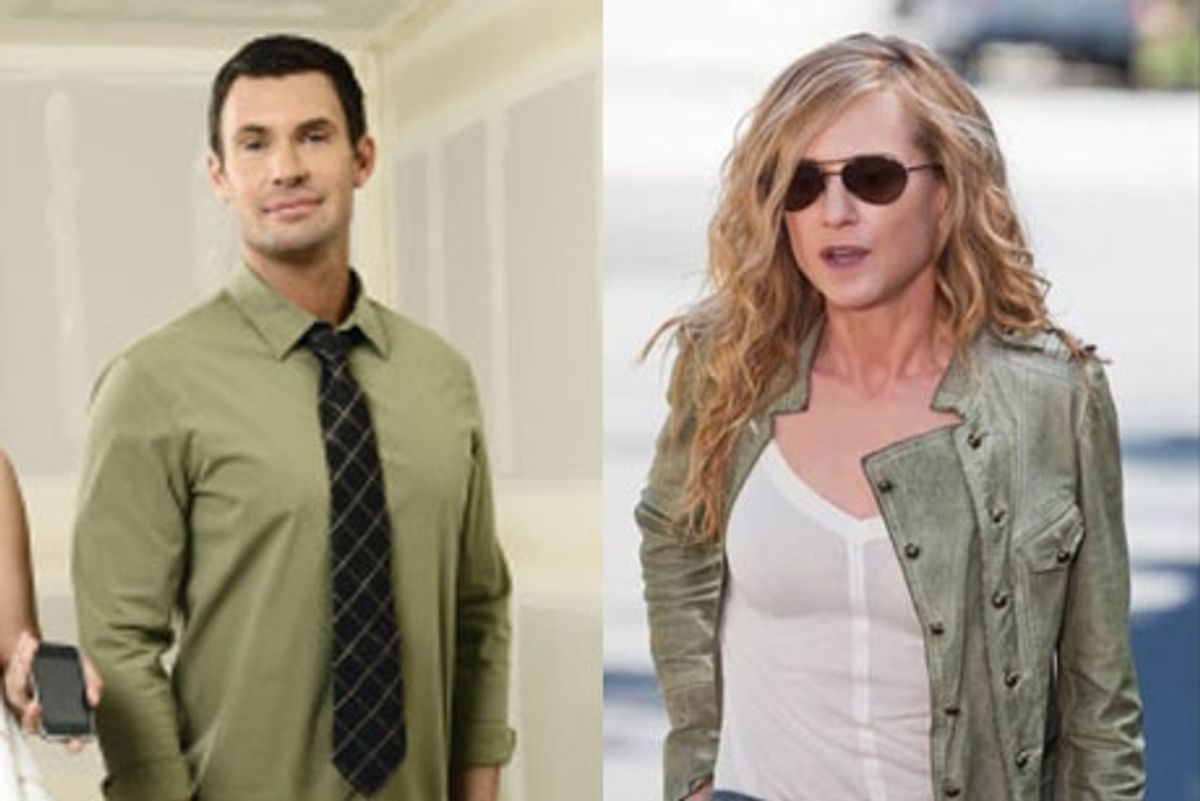 Convincing someone who's crazy that they're crazy can be very challenging. First of all, if crazy people recognized how crazy they were, they'd be in therapy or they'd be taking powerful drugs. Also, most crazy people don't believe in therapy or drugs. That's part of what makes them so crazy.

But let's face it, if the sane people are calling their friends, laughing about how crazy the crazy people are to think that they're crazy, well, then they're probably crazy, too. And if the friends get off the phone with these so-called sane people and joke about how crazy they are to call their crazy friends crazy when obviously they themselves are crazy, well, those people are also crazy, because if they weren't, they'd just relax and eat a muffin or something instead.

So, is everyone crazy? No, there are some sane people out there. They're just not crazy enough to waste their time talking to people like us, because … well, we're crazy.

Doughnuticus lostus What I, personally, find perplexing is why anyone would waste their time on sane people. What could sane people possibly have to offer the rest of us? They see the world through reasonable eyes. They proceed rationally through the day. They make conscious, logical decisions. Oh, Christ, I can't even talk about them without feeling itchy all over. Who lives that way?

What I love the most is a friend who'll call me on her cellphone after doing something crazy, and she'll say, "Why in the world did I do such a crazy thing?" and I'll say, "I don't know! But remember how I said it was totally crazy and you shouldn't do it?" and she'll say, "Yeah, but I just thought you were crazy, so I didn't want to take your advice." Then we each complain about how crazy we feel all the time until we start to drive each other crazy, at which point one of us pretends we're losing our cell connection and hangs up.

You know what's even better? Watching crazy people on TV with other crazy people/spouses/friends/cats/yogurts. This goes a long way toward explaining the popularity of Bravo's Flipping Out" (3rd season returns at 10 p.m. Tuesday, Aug. 18), a show that's ostensibly about refurbishing and reselling high-end real estate. But what we really want is to see Jeff Lewis, L.A. house flipper, have a breakdown over the fact that his latte isn't exactly 130 degrees. Because crazy though we may be, we never knew that you could give your local barista a precise numerical temperature and not expect to get a lukewarm, extra-foam Loogie Special in response. Seeing sweat break out on Jeff Lewis' forehead after sampling his 128-degree latte is a gigantic Ho-Ho cupcake for the crazy person's soul.

But what's really exciting about the new season of "Flipping Out" is that Jeff is really struggling. The real estate market is a wreck, Jeff can't sell real estate at exorbitant prices just by installing a stainless steel fridge and placing a few throw pillows at jaunty angles, and presumably he can't get the same kinds of enormous loans that he used to get. In other words, Jeff has to do real work and answer to other people and stuff, things that he finds enormously distasteful.

Now, to be fair, most of us find these things enormously distasteful. In fact, we've been seething and hissing and drinking to excess for years now, just to cope with the distastefulness of it all. Jeff, on the other hand, is new to this flavor of suffering. That's what makes it so delightful.

"I would think twice about taking this remodeling job three years ago," he says of working for a talkative, slightly confused woman named Carrie in Orange County. "But the fact is that the times are different, and I'm not in the position, really, to turn down business."

In fact, Jeff and his highly entertaining, freshly divorced assistant, Jenni, had to drive over an hour just to get to Carrie's house, a drive that Jeff found incredibly inconvenient and taxing and just wrong. After meeting with Carrie and listening to her go on and on about how she'd like her house to look (which one tends to do when one is remodeling one’s house, but which Jeff nonetheless seems to find personally offensive), Jeff has a tiny little existential crisis over why he can't pay a bunch of Mexicans next to nothing to knock down walls and lay sheetrock while he lunches on sushi like he used to. All he ever had to do before was waltz in, place a few throw pillows at jaunty angles, and charge $2.5 million to another existentially needy jackjuice for the final product.

Jeff recounts his existential crisis for the camera: "That meeting made me think about the way things used to be, and how easy I had it, and how I loved being my own boss. And I had a lot of money to work with, and I didn't really have to answer to anyone. These are certainly things that come to mind when I'm driving down to Orange County, you know, an hour and 15 minutes away, to meet with Carrie. This is not something I've done for a long time." Jeff speaks of driving one hour and 15 minutes in a tone the rest of us might employ when discussing a virulent, drug-resistant intestinal malady.

Of course, since we're also crazy (Yes, you are, too. Stop kidding yourself), we scoff at Jeff's lazy, tender-pawed, hothouse flower tendencies, but we also know exactly how Jeff feels, since we often find it horribly inconvenient and exhausting to brush our teeth or put on our shoes in the morning. In truth, Jeff offers us a magnified reflection of ourselves. Are we really that bad? Do we really expect to do nothing and get paid for it? Come on, isn't that the American dream? Does Jon Gosselin shit in the woods?

Mostly, Jeff Lewis offers a cathartic view of how refreshing it is to not just admit your craziness to the world, but to openly advertise your insanity as if it's a quality and not a liability. But the best part is when Jeff gives other people advice:

Jeff: When is your date with the gay guy? And if he's gay, why isn't he asking me out?

Jenni: He asked me out for a salad and now it'll be sushi.

Jeff: OK, and you don't think it's a red flag. Have you ever had a man ask you out for a salad?

Jeff: No. Red flag. See, this is what I'm trying to teach you. You've got to pay attention to these things.

With this guy as your guru, what can possibly go wrong?

While Jeff Lewis should probably be considered a semi-fictional character, since, like any highly adaptive animal, he's learned to play up the crazy for the cameras, my favorite entirely fictional crazy person may just be Detective Grace Hanadarko (Holly Hunter) and her unstable posse in the Oklahoma City Police Department.

In fact, I'm comfortable declaring the entire staff of "Saving Grace" (10 p.m. Tuesdays on TNT) certifiable after the episode a week ago, in which a murder case that the team had been investigating for the first half of the show, a solid 30 minutes of airtime, was revealed to be an elaborate prank. The whole thing was set up by Grace, Ham (Kenneth Johnson) and Rhetta (Laura San Giacomo) to get back at Bobby (Gregory Cruz) and Butch (Bailey Chase) for their last, only slightly less elaborate prank a few weeks prior, one involving fake news broadcasts and fake investigations into Grace and Ham's drunk and disorderly conduct.

Just so you understand, the fake murder investigation in this episode included: 1) the placement of a dead body in a warehouse location, 2) Rhetta pretending that she'd been burned by hydrofluoric acid, and forcing Bobby to help her treat her burn, 3) Grace's cousin posing as the grieving, distraught widow of the victim who cried and passed out at the office, and 4) Ham's friend posing as a suspect who threw hydrofluoric acid on Bobby and Butch, at which point they were urged to take off their shirts and place a foaming substance on their chests.

And then, just when we're thinking, Man, this is a really strange episode, just when we start wondering why Grace and Ham have been giggling on and off throughout the entire investigation (which isn't that out of character, just so you know), we find out that it's all a joke. Bobby and Butch were panicking, trying to get the acid off their skin ("It's not burning!" Bobby yells. "Give it a minute!" Rhetta yells back) and finally Grace, Ham and Rhetta reveal the prank, while laughing hysterically.

Now, maybe if you were a die-hard "Law & Order" fan and suddenly Sam Waterston stuck a whoopee cushion under Dianne Wiest's chair, you'd feel a little assaulted by the trickery. But "Saving Grace" fans are cut from a particularly crazy cloth, what with all of the talk of God and the angels and the drinking and the heated fights about Texas vs. Oklahoma. It's an acquired taste, but the off-kilter banter and insults and bizarre office shenanigans are what makes "Saving Grace" such an entertaining show. Sure, these detectives are hell-bent on bringing criminals to justice, but they don't always take their jobs that seriously, and most of them are a little bit unhinged, to boot.

But they're not crazy in the now-predictable renegade-expert way that you find on "House," and "Lie to Me" and "The Mentalist" and a million other procedural dramas. No. They're crazy in the way they bicker, stay up all night drinking shots, and then stay up all night drinking coffee and solving crimes. Accordingly, by the end of the episode in question, once everyone has moved on to solving a real (albeit 20-year-old) crime in what little time they have left, Ham and Grace lie down on the floor of the crime lab, giggling, while Rhetta recounts to them both, very dramatically, how she found fingerprints that matched the suspect's.

Grace and Ham high-five on the ground and Grace mutters, half asleep, "Here's to the greatest prank in the history of the department, plus solving a crime 20 years old. Not bad for a weekend!"

Crazy people are the greatest, don't you think? You don't? Well, you're too crazy to be trusted anyway.