What's in store for the women of "Mad Men"?

Will Betty commit suicide? Will Joan leave her wretched fiance? Predictions and requests for our fave TV females 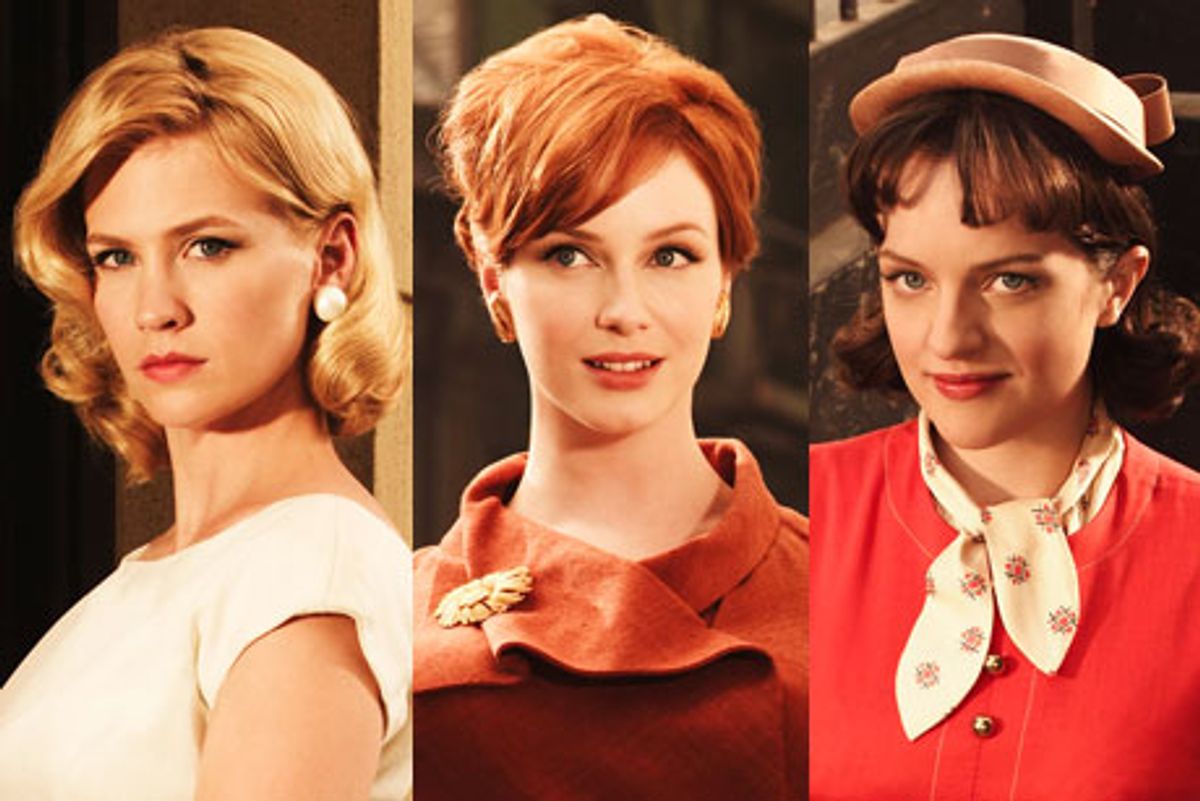 One of the many joys of "Mad Men" is watching the female characters basically live out the dawn of modern feminism. Last night's season premiere didn't tell us too much about the three heroines at the show's core -- Betty is hugely pregnant, Peggy is still struggling for respect in the workplace and Joan is itching to bolt Sterling Cooper for wedded whatever -- but we do finally know which time period they'll be reenacting for the next three months: It appears to be late spring-early summer 1963, just months before the rupture that will tear through the country on Nov. 22, 1963. It's a fertile time for women's history: Betty Friedan's "The Feminine Mystique" was published in February 1963, only days after Sylvia Plath took her own life. We asked the Broadsheet staff to prognosticate how history might intersect with fiction this season as well as what they hope for the characters -- and fear.

Tracy Clark-Flory: Betty is blissfully pregnant, but I predict that she'll become listless and dejected soon after the baby is born. (A line Draper offered to the stewardess in last night's episode comes to mind: "I keep going to a lot of places and ending up somewhere I've already been.") I suspect that Sally is at that all-seeing age where she begins to ask some uncomfortable questions of Betty -- particularly about daddy and mommy's relationship. There seems to be a budding romance between Joan and John Hooker, the British financial officer's male secretary; they have a shared sense of oppression, and she appears rather sympathetic to his plight. Ultimately, though, I'm afraid Joan's personal arc is going to be a sad one -- as much as I would like to see her escape her upcoming nuptials and miraculously rocket through the ranks at Sterling Cooper, I see casseroles and canapes in her future. As for the enigmatic Peggy? There is just no telling.

I have but one request for the upcoming season: Please show Betty, with a cigarette dangling from her mouth, reading "The Feminine Mystique" while vacuuming in one of her frilly A-line housedresses.

Amy Benfer: Ever since “Mad Men” began, I have been on suicide watch. I feel somewhat guilty admitting this: It’s histrionic, defeatist, fatalistic to literally have a death wish for these characters. But I have my reasons: Matthew Weiner, the creator of “Mad Men,” has said that as an undergraduate at Wesleyan, he originally believed he would become a poet. One of the unfortunate legacies of literature at mid-century is that a number of writers ended up dead: Hemingway shot himself in 1961; Sylvia Plath gassed herself in her kitchen oven in February 1963 (right before the third season picks up); Frank O’Hara died in an accident at 40 in 1966. Anne Sexton, a friend of Plath’s in the '60s, killed herself in the '70s.

There’s no way to discuss a single one of these suicides without engaging in a lot of reductive -- and wrongheaded -- hack pop psychology. Plath and Sexton, in particular, were interpreted by critics as the shadow side of “The Feminine Mystique”; while some women raised their consciousness, others, unable to match their expectations with reality, died. This led to a real sense at the time that being an artist -- in particular, being a woman artist -- could be fatal. (She wasn't a writer, but Marilyn Monroe’s death, addressed in Season 2, also contributed to this myth).

Let it be said that I don’t actually believe this, even and especially as a way to interpret the actual lives of the writers I just mentioned. But one of Weiner’s great skills thus far has been to take a cliché of the era and revisit it in a surprising context. And thus, throughout Season 2 I was convinced each week that Betty Draper was going to end up dead. What could be more surprising than to take the character who seemed most likely to follow the arc of Betty Friedan’s suburban housewives and put her in another story of the era?

Weirdly enough, both Matthew Weiner and January Jones, the actress who plays Betty Draper, mentioned Plath as an inspiration for her character’s arc in Season 2. Apparently right before a scene in which Betty confronts Don about his philandering, Weiner asked Jones to read Sylvia Plath’s poem “Ariel” to get into character. “It confused me and freaked me out,” Jones told writer Bruce Handy, who writes: “Not knowing the coming plot lines (Weiner may not have either, at that point), she assumed this was his way of telling her Betty would be sticking her head in the oven for the season finale.”

She didn’t, of course. The scene in which she takes a shotgun to the birds outside her suburban house made me think she might be turning around. But honestly, I do still feel that somewhere in the series, we are going to see someone whose expectations are so completely unmatched by their reality, that death feels like the only way out. I can’t say I’m looking forward to it. But it seems like one story of the era that Weiner would want to tell.

Judy Berman: I find myself wondering which woman will be the first to pick up "The Feminine Mystique." While Peggy is probably the biggest reader of the bunch, she seems to already, instinctively, understand Friedan's message that life as a housewife and mother can be terribly unfulfilling. Betty is the obvious choice, since the book so clearly speaks to her life. But I'm hoping that Joan grabs a copy just in time to make her think twice about marrying a rapist and abandoning her career. As we saw last season, Joan seems to have ad-biz ambitions that reach beyond the steno pool. I'd love to see her achieve them.

We've known all along that the dapper, blandly married art director is as straight as a Liza Minnelli convention held on a rainbow. This being the early '60s, however, gaydar has yet to become a cultural concept, and his secret has been safe even from himself. But last night, the closet door opened up a crack, and Mr. Romano finally got a taste of how the other half lives. How will he be able to go back to the missus now?

Though it's clear Don and the rest of the world expect him to go right on playing a part, I wonder to what extent that will be possible. Will he follow Don's example of hypocrisy and on-the-road dalliances? Will he start cruising in the park? Will he chuck it all and move to Paris? Or will he retreat further into guilt and shame? His world's still a long way from Stonewall, so I can't get my hopes up for a happy outcome. But I'd love for him to become single and meet a "friend" like the fellow businessman who tried in vain to seduce him in Season 1. The gentle mama's boy has paid his dues his whole life. Please don't let a moment with a Baltimore bellhop be the best that our Sal ever gets.