Excuse me while I stick my head in the toilet

Ever wonder what it would be like to clean strangers' homes for money? Well, I don't have to 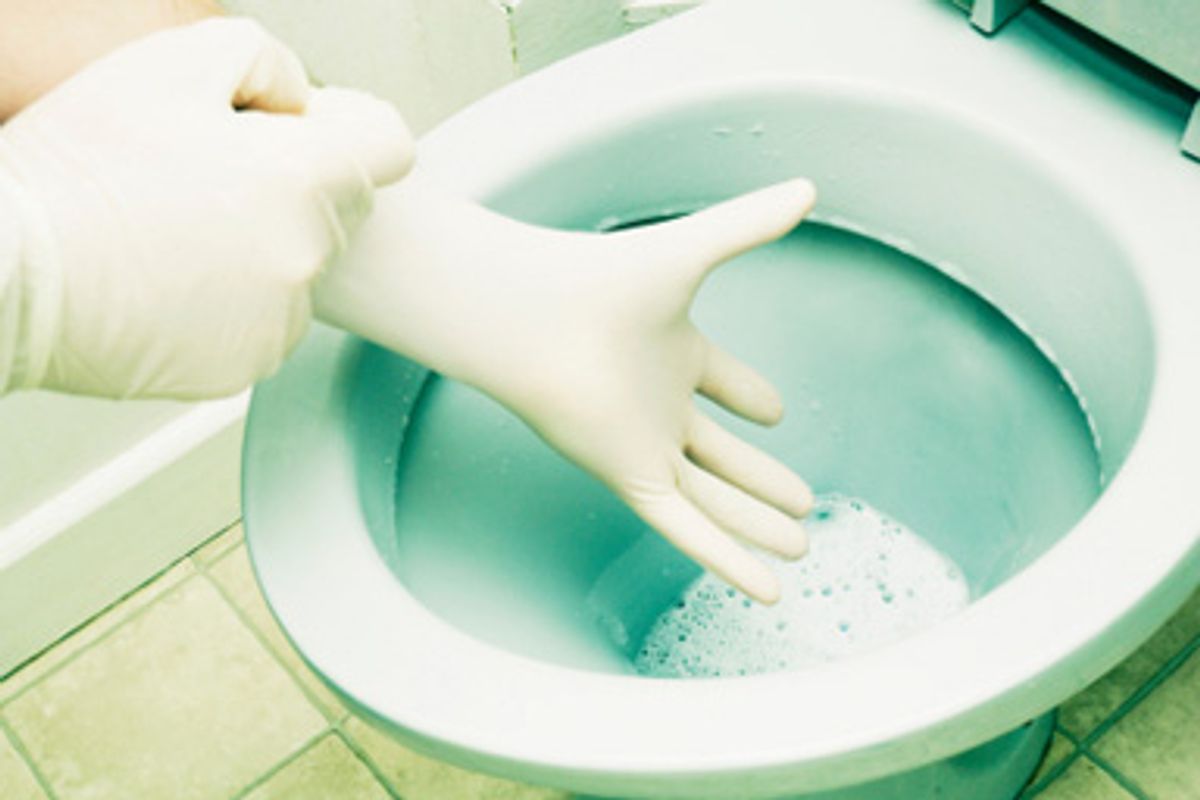 Excuse me while I stick my head in the toilet
--

An unknown number lit up the tiny screen of my pink cellphone. Mindful of traffic, I pulled over into an empty parking lot.

“Is this the cleaner from the Craigslist?” asked the caller in a soft, lilting soprano.

The parking lot was a cracked mess of broken concrete and foot-high weeds. The lot used to front Southwyck Mall, but the mall fell to a wrecking ball a few months ago, another casualty of the stagnant economy. My parents knew the people who ran the carousel at Southwyck. As I little girl, I rode the painted horses there for free.

“You can come clean tonight?” the woman asked. “Two bedrooms. Should be an easy job for you. Please.”

I gave her a number that seemed fair and sped off with my vacuum and a gallon of Clorox to a spanking new Ye Olde Village-style mall. I got a lost a few times; every building looked exactly alike.

A tiny, pale woman with a baby on her hip greeted me. She looked at once exhausted and imperious. She'd just come back from three months in New York, and her husband hadn't cleaned anything – he never so much as wiped the kitchen counter during the 90 days he spent alone in the condo. He didn't tidy up after shaving and left tiny pieces of hair on every surface. I could probably have braided the bathtub had I but time and inclination. (That tub alone made me want to kill myself just a little bit.) I instantly regretted giving my quote over the phone, but I’d given my word. And that’s how I ended up spending Sunday on my knees in front of someone else’s commode.

I clean strangers' toilets for money. I have two college degrees, and I sold a book to an overseas division of Random House. The money hasn’t come rolling in (though I pray to Oprah on a regular basis), so I clean houses as a way to pay the bills between royalty checks.

This toilet was particularly brutal: It mocked me with all its nasty human feces stains and the dusting of wiry black hairs around the base. White surfaces and human hair have become the bane of my existence. Hair clings to the outsides of toilets like Romeo to Juliet, Brad to Angelina, or me to the strawberry vodka and cranberry juice that this work makes me crave.

My college friends have prospered, and they worry about investments. The last guy who dumped me (“I can’t do the boyfriend-girlfriend thing,” he told me as we snuggled together in bed) drove three hours to Columbus so he could rescue his money from Charles Schwab. As I detail the rim of the bowl with a toothbrush, I think about Barack Obama.

I went to see him speak just before the election. Funny how politicians love to visit Ohio in the fall every four years or so.

I have no 401K. I have no mortgage and am lucky to have rent money about half the time. I've struggled with disability all my life. I once weighed almost 600 pounds, leaving me chronically broke and underemployed. After having gastric bypass surgery and dumping most of the excess weight, I still rely on disability and the health insurance it provides. But I struggle. I had minus $200 in the bank as Obama promised to help send my (nonexistent) children to college.

Walking home from that speech, I passed a pawnshop, doubled back, and sold the gold necklace I’d put on that morning on the off-chance that I might appear in news photos or in television footage of the crowd. The pawnbroker counted a fifty and a hundred into my palm, and I deposited most of the money, bringing my total net worth up to an awe-inspiring minus $87.

Months later, with Obama in office, I'm certainly not the only one struggling. Even with the recession in full swing, though, my clients can still afford me. People who have money to keep their dogs in daycare can splurge for a Craigslist cleaner every once in a while to spare the lady of the house the indignity of scrubbing her own toilet. I meet compact, perfect women, their biceps toned and tan, and I feel large and shabby by comparison. They usually hire me only once; given the uncertainty in the job market, no one wants to make any long-term commitments.

I suppose I could find other ways to make ends meet. But cleaning has a physical aspect I relish. I could never have done this work before I lost the weight. I also like the feeling of having done something. When you transform a filthy hellhole into a clean house that smells faintly of orange furniture polish, you know you’ve accomplished something.

Cleaning a house will teach you a lot about its occupants. I clean a minister’s house and find propaganda videos about Muslims and their evil plans for Christendom. I find pornography. So much pornography. Almost none of my clients, even the very wealthy ones, own books. People have all manner of weird bedroom habits, too – habits that have nothing to do with sex.

“When the girls were young, I told them they had to make their beds. So they started sleeping on top of the bedspreads,” one client, 40-something and a doctor’s wife, tells me. She shrugs. Her daughters are 15 and 17 and they don’t remember what it feels like to sleep under clean bedsheets. Or how to clean their own bathroom vanity. I find a bowl of elderly body wax next to their sink, tiny pubic hairs thrusting up from the surface like a thousand football fans doing the wave.

“I need windows spot-cleaned, I’d like the litter boxes emptied, and you’ll need to buy a canister vac. They’re the best on my floors,” she tells me. She wants me to clean her 4,000-square-foot house for $80. Cleaning a house that size could take as long as six hours. Between gas, supplies and equipment, I need to charge $20 an hour to turn a profit. I give her my estimate – $100 if I can do it in five hours. I never hear from her again.

My friend Adam got a divorce, and I clean his place once a month. We dated briefly. I liked him that way, and he liked me like a pal. But I've dated other men, too. In the last year, I’ve been out with a guy who was afraid of soup (“too much stuff … overwhelming”), a serial shoplifter, and a man who once faked his own death. Adam has a steady girlfriend. I wish him well. I tell myself I do. I pick up his-and-hers pairs of shearling slippers in Adam’s bedroom. I stare out the window for a long minute before turning on the vacuum.

The house full of husband hair made me long for all those wistful moments picking up children’s toys or hating Adam’s (very sweet) new girlfriend. The john seemed like the worst that apartment could do to me till I saw the stove caked with grease and the rotted remnants of a hundred spilled sauces. It was so wretched there was no way I could finish it all in one night. The client agreed, and I offered to come back the next day to tackle the rest.

It took me two hours to do the cook top alone. I scrubbed till my hands went numb. My nails looked like I’d stuck my fingers in an electric pencil sharpener and the wounds were saturated liberally with oven cleaner. The smell of chemicals burned my nose and eyes, and I wondered about the health effects of inhaling an entire bottle of Easy-Off. I could swear I felt a tingle in my ovaries. I can probably only make flipper babies now.

“Take these to the Dumpster,” she said, waving one manicured hand at a pair of enormous trash bags. I grabbed one bag – all I could carry with the vacuum and my bucket of cleaning supplies – and took it outside. I got in my car and hauled ass.

I drove a steady 80 miles an hour from the far 'burbs into the broken-concrete heart of the city and then the artsy neighborhood where I can afford (barely) a charming apartment in a building across from a vacant lot. I pass a burned church, a huge sign in front bearing the slogan “On Fire for the Lord!”

On the way up the stairs to my third-floor apartment, I calculated my profit. Eight hours of cleaning and two hours of travel time. $12 on gas and another $10 on supplies. My profit: $78 and a ruined home manicure.

I opened the door and was greeted by the stink of the cat box. My living room looked like a rogue nuke hit it. I should clean, but I'm not going to. I'm taking a long bath and having a large glass of pink vodka. If anyone asks, it's the maid's day off.